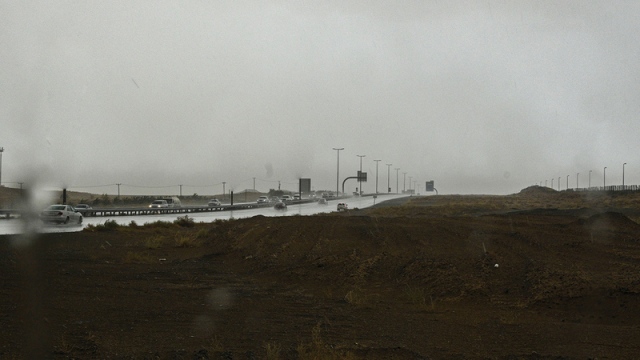 The rain led to the flow of valleys and reefs, and a clear drop in temperatures, in addition to the accumulation of quantities and pools of water on the roads in the region. The rains were concentrated in areas within the city of Fujairah and the neighboring mountainous villages on Sheikh Khalifa Street, Masafi, Al-Bathna, Murbah, Qadfa, and Al-Tawyin area.

While the city of Khor Fakkan witnessed heavy rains, which led to the flow of mountain reefs and valleys, and the gathering of large quantities of water in the low places.

Also, different regions of the country witnessed wind blowing that caused dust and dirt, which led to a decrease in the horizontal visibility.

While the National Center of Meteorology expected that the weather today will be dusty and partly cloudy to sometimes cloudy in some eastern and northern regions, with the chance of some rainy cumulus clouds, a slight decrease in temperatures, and wet at night and early morning in some coastal areas, with the possibility of fog or fog forming Light, moderate winds, brisk at times, and cause dust and dust.

The center also expected that the winds will be southeasterly – northwesterly from 15 to 25, reaching 40 km / h at times.

– Meteorology expects the formation of fog or light fog in some areas in the country.