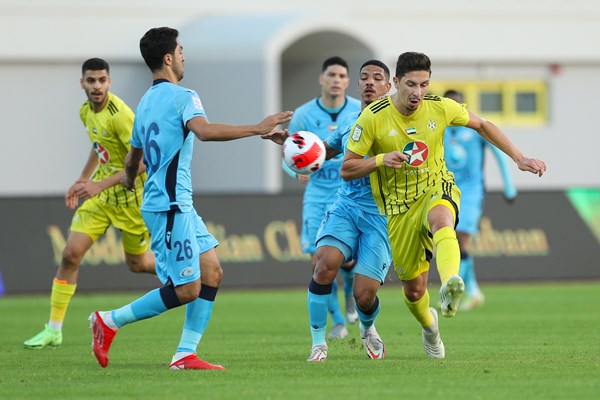 Faisal Al Naqbi (Kalba)
Baniyas returned with three important points from Kalba, by defeating the Tigers 3-1, in the meeting that was held at the conclusion of the first round of the league competition. Baniyas added its second victory in a row after its victory over Al-Ahly youth in the previous round, and reached the 18th point, equal with the “Tigers”. To finish the first round in the best possible way and continue its start to regain its previous position in the competition by occupying the sixth place temporarily, after it was in the 11th place, while the “Tigers” lost a position with a loss to fall to seventh place with the same balance of Baniyas.
“Al-Samawi” continued its lead in the results over Al-Ittihad Kalba, with its eighth victory in the history of the two teams’ meetings, and the first loss for the Tigers in its stadium this season.
Bani Yas advanced early in the second minute of the match through Mohammed Rashid Al Hammadi, who scored the first and second goal for him in the competition, and the referee canceled a goal for Nicholas Jimez for offside, and in the 25th minute of the meeting, the Swede Isaac Thelin scored the second goal for his team and the third for him in the league competition.
In the second half, the Togolese Malaba reduced the difference for his team “Tigers” with a beautiful header goal in the 63rd minute of the meeting, but “Samawi” quickly returned to advance in the meeting through Mohammed Rashid Al Hammadi, who crowned himself a star for his team through his first double in the competition by adding the third goal of the heavenly in the minute 70.