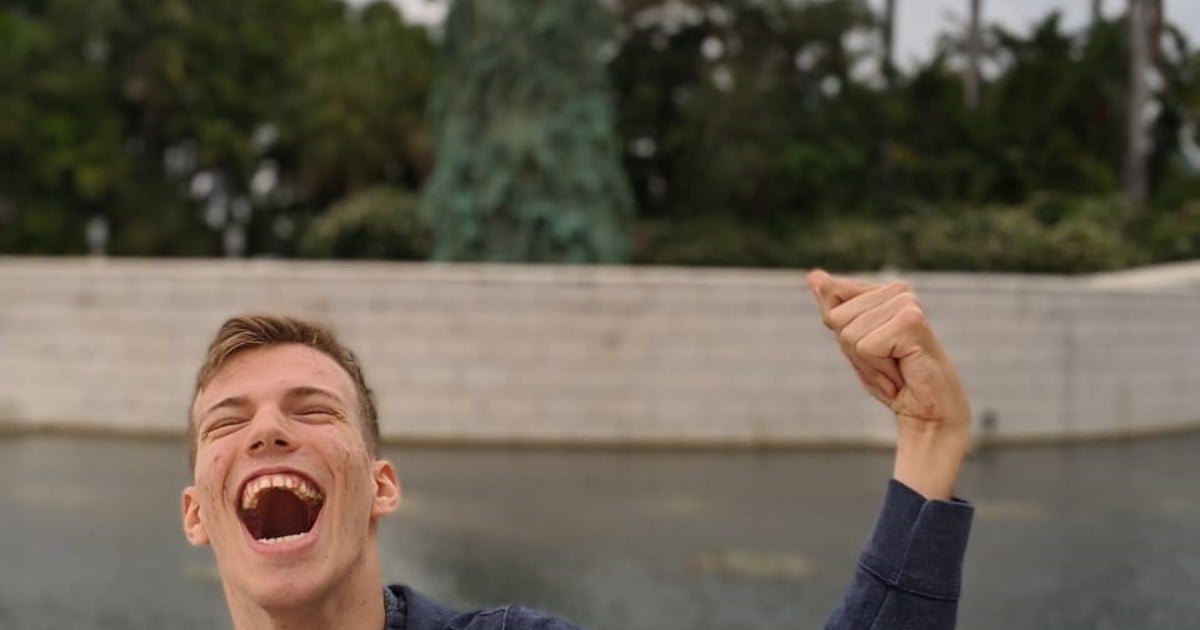 Ivan Davidovich He studied multimedia design and became a standard bearer at school. He has the same interests as many young people his age and this Monday a video of him, with a message for Alberto Fernández, revolutionized the networks.

What motivated his response to the President was one of the many struggles that he had to face from the day of his birth, when a hypoxia caused him to cerebral palsy that keeps him in a wheelchair and forces him to communicate through an eye-handling device called Tobii Dynavox.

That fight is what many people with disabilities face: the ignorance. Fernández, to justify his decision to close schools, said in an interview that “boys” with disabilities “do not understand the dimension of the health problem they face.”

“The truth, I was disappointed, because we fight for a more inclusive country and these things set us back light years. I hope you can take your time to answer me, “said Iván this Monday, in dialogue with Clarín.

Not only that, he also considers that the president “should publicly apologize” to all those he offended.

The young man “unfortunately expected something like this”, especially considering that citizens with disabilities have been sidelined at the start of the slow first stage of vaccination against the coronavirus.

From his home, when asked why he thinks they were left aside, being citizens at risk, Iván, 21, was blunt: “Is not enough the phrase of the President? My answer is that “,

Of course, if for the Government “those boys do not understand the dimension of the health problem they face,” they would not be in a position to complain either. But there is one who spoke for all of them and received numerous messages of thanks and support.

“I am one of many who want to be heard. Today I am their voice. I received many messages from parents of children with disabilities thanking me, “said the unexpected spokesman for the many who cannot speak.

And he continued, surprised: “It is exciting to know that there are many boys like me. The truth is, the viralization was very fast. I found out last, it was everywhere.”

Although Iván admitted that “Argentina made a very big advance in terms of inclusion,” he made it clear that “obviously a lot is missing so that it is total “.

“In a context of great sensitivity, should be informed first of all, “the young Davidovich reprimanded the head of state.

As he becomes known on social media and many celebrities spread his open letter to the President, Ivan continues to believe in a better future.

“I dream of many things … That there are no more political interests ahead of the citizens. I believe that the union it is an engine to get ahead. Until we become aware, we are not going to change the situation, “he concluded in his talk with Clarín.

This Monday, Fernández met with the authorities of the National Disability Agency (ANDIS) and received a training, in which, of course, they talked about his controversial phrase.

The letter that went viral

This is the phrase that echoed me all my life, until I said enough. I was quiet for a long time, but now I want to speak to you, Mr. President.

My name is Iván Davidovich, I am 21 years old, a multimedia design student. I have cerebral palsy. I cannot speak, but I am speaking through a device that I operate with my eyes.

Throughout my life, I have always listened minimized my intellectual capacity. But i never imagined that a president would.

With all due respect, I’m in a wheelchair, but it doesn’t mean i can’t understand the serious situation of the country and the world, as you said, that people with different capacities do not understand.

This makes me think that many of us we did not receive the vaccine because we do not understand the situation that we are going through. I am a person like any other.

I want to clarify that the correct way to address is ‘people with disabilities’. It is not said ‘people with different capacities’. We are people with rights. You should be informed, Alberto.

Sometimes I dream of a better country, but with these kinds of comments it is difficult for us to imagine. Mr. President: I propose to meet with you to clarify what you said in public and show you that we are capable.

A player encounters a curious enemy in Red Dead Redemption 2

Coronavirus: India sets a new record of infections and deaths in 24 hours