Hazard will not start a war with the “Real”! 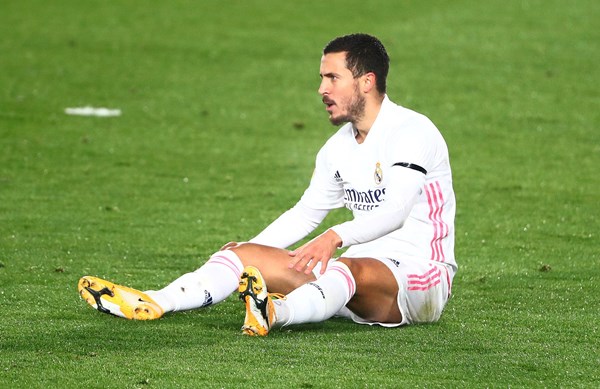 The Belgian star, Eden Hazard, the Real Madrid player, who was again injured, caused a kind of “confusion” and misunderstanding between the royal club and the Belgium national team, but Roberto Martinez, the coach of the “Red Devils” team, was keen to clear the situation and clarify his point, to remove Any ambiguity or confusion, and refutes the rumors that circulated in some media about the existence of problems between the two sides.
In a press conference, “L’Equipe” newspaper quoted excerpts from him, Martinez said that what was reported about differences between the Belgium team and Real Madrid regarding the treatment and rehabilitation of Hazard is unfounded, and there is no war between us, and Hazard did not join the national team to participate in matches. Qualifying for the 2022 World Cup, because he is still suffering from an injury, and he became convinced that there is no need for a new surgery for him, based on the advice of the treating doctor at the Royal Club, despite the recommendation of the Belgian national team to perform this surgery, and perhaps this is the reason for the tense relationship between Two sides. Martinez was keen to emphasize once again that there is no disagreement on this issue, and he said: We are working in the same direction in which Real Madrid doctors work, and the relationship between the two medical services is excellent, and I can only assure the Real Madrid and its fans that we do not seek, except for what is Best for Hazard.
He added: Here is the process of his rehabilitation has begun, and we must not listen to the rumors and speculations that some media outlets have, as the medical opinion of the experts confirms that this surgery is not necessary, so there is no war or discord, but rather we were trying to find the best solutions, and our hope is great that Hazard is able to catch up with the “Euro 2020” tournament, which will be held from June 11 to July 11 next, in which Belgium is considered one of the favorites to win. Martinez indicated that there is no specific date for Hazard’s return, and he said: We only think about his safety and what he needs, and what is in his interest, and I am sure that he will return on time, and we and the Madridians must focus all our focus on giving him what he wants, and I am very optimistic about His participation in the «Euro».