Have a childhood or a job? 160 million children have no choice 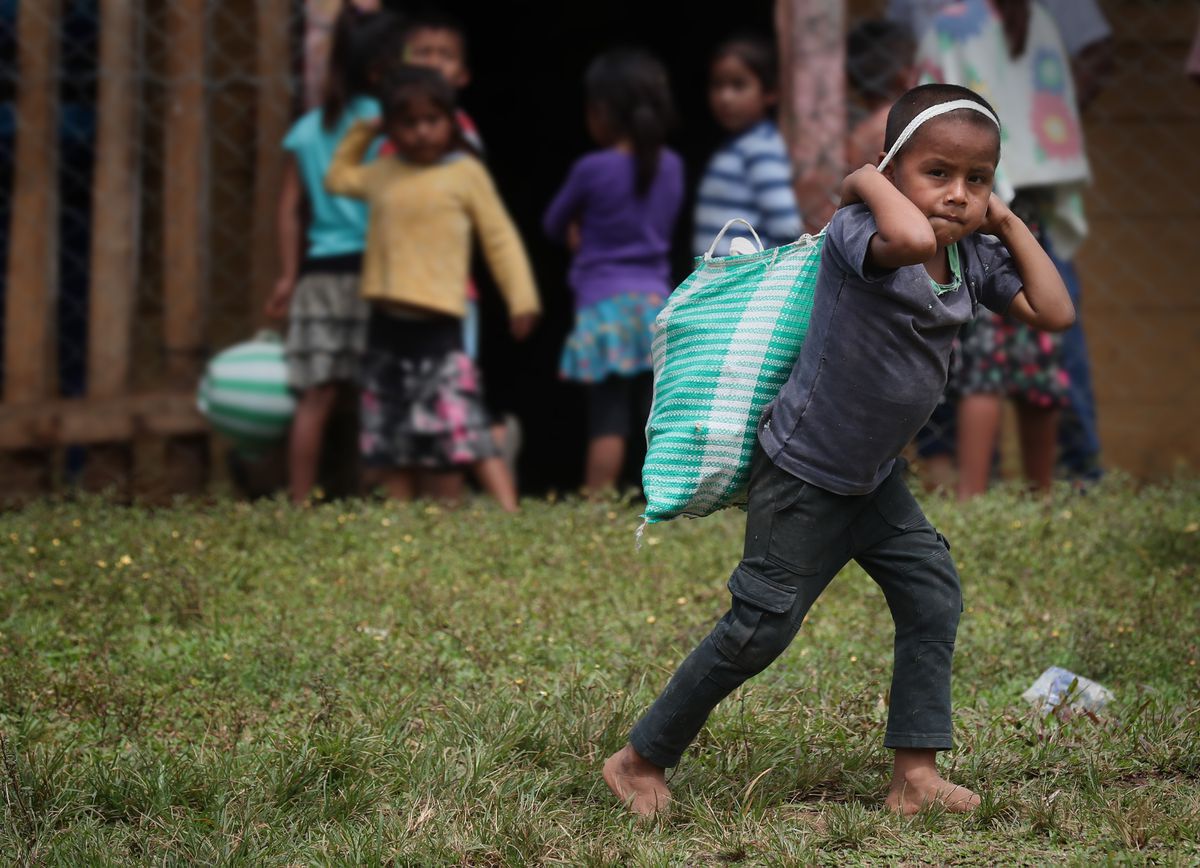 Rolin Cristiano Aarón Caal Batz is barely five years old but one thing very clear in life: he wants to be a drummer. He grabs any junk that his mother, Daysi Oralia Batz Lem, hides from him and shakes and beat them to make music. “And yes it sounds good, breast. Although it is not a very good battery ”, says the little one through a video call. For this humble Guatemalan family, which earns just over 40 euros a month, buying an instrument from Rolin only fits in the dreams of the child, who for a year has not even had time to improvise with the cauldrons. “It is better if I help my father,” the 24-year-old mother shyly explains.

PHOTO GALLERY | The life of an adult being just a child

By the time he was four, Rolin “could” carry firewood and go to the river for water. Sometimes alone and sometimes with his father, farmer and provider of the only salary that comes into the house. Between both men, they plant cardamom, milpa (corn) and beans. Part of the harvest is for own consumption and another to be sold in the market. “They buy it from me too, breast”, He says proudly. Besides being a drummer, he wants to be like his dad. A wish that the mother chokes on: “I would like him to study and get a degree. But you already have to learn. At 12 or 13 years old, he will have to really work. It is always necessary ”.

Rolin is one of the more than 160 million children forced to stop being one, according to the latest study by the International Labor Organization (ILO) and Unicef: Child labor: 2020 global estimates, trends and the way forward. Of these, half are between the ages of five and 11, the age range in which early entry into the labor market has increased the most. The pandemic threatens to include another nine million in this abyss by the end of 2022. “Although if urgent measures are not taken, it could be 46 million more,” warns Joaquín Nieto Sáinz, director of the ILO Office for Spain. So far, the figure affects one in ten boys in the world.

This global database, published every four years, reveals the first setback in the downward trend in this rate and in the fight to eradicate the dire fate of these little ones in the last 20 years. Since 2016, about 8.4 million children have been added to the list. “That there are 160 million children trapped in this, in the XXI century, when more wealth is created in the world, is unacceptable and a collective failure,” criticizes Nieto, who also regrets that goal 8.7 of the Development Goals Sustainable (ODS), for the eradication of child labor in 2025, “is unattainable”. “These are very negative figures in a year like this,” he adds, referring to 2021, declared the international year for the elimination of this systematic violation of the rights of minors by the United Nations.

The flowers we give away, the clothes we wear, the toys we buy and the jewelry we wear. It is very likely that if you pull the production line, there will be children’s hands involved

Joaquín Nieto Sáinz, Director of the ILO Office for Spain

“After almost a second year of lockdowns, school closings, economic crises and cuts in national budgets, families are being forced to make heartbreaking decisions,” said Henrietta Fore, UNICEF executive director, in a statement. Life was not easy for them before. But the pandemic has been a turning point. Something the Batz family knows well. “Sales weren’t even half. And we had to eat ”, explains the Guatemalan mother. “Here is what it takes. What do I do to him? ”He wonders.

“They are not miniature adults”

Weight overload, exposure to chemicals or carcinogens, and musculoskeletal damage are behind 79 of the 160 million child jobs. Hazardous jobs also increased by more than 6.5 million. “Children are not miniature adults. They are children. And the damage to health at this age is especially serious because it will compromise the development of this generation ”, criticizes Nieto.

80% of currently working children do not go to school

For Carmen Molina, director of child awareness and policies at Unicef ​​Spain, the key lies in a battery of complementary responses. On the one hand, promote economic measures so that families do not need to “throw away their children.” And, on the other hand, incentivize benefits per child in school so that enrollments do not drop. And it is that, according to the study, 80% of the children who work at the moment, do not go to school. “Education is the only answer. But it has to be quality training. And parents have to understand that it is a priority that they continue studying. That will only permeate low-income families with incentives so that they do not follow the same path as their parents, ”the expert clarifies.

Evelyn (Uganda) and Kofi (Ghana) have a lot in common even though they are separated by thousands of kilometers. They do not exceed 15 years, live in rural areas and have no choice but to work so that their families can get ahead. Evelyn’s day is no less than 11 hours a day. Dries sardines and loads stones near Lake Victoria for 1.5 euros a day. Kofi, 11, delivers vegetables from the market to customers’ homes, carrying up to 20 kilos per order. Everyone would rather be in school and be the caregiver, not provide it. But hunger, the closure of schools as a result of the covid and the pandemic itself has not given them a choice.

These testimonies, collected by Human Rights Watch (HRW) in the report I have to work to eat, published on May 26, respond to the profile of the working child. Also according to data collected by Unicef ​​and ILO, the face of the exploited minor is male –97 million boys compared to 63 million girls–; African, this is the continent with the highest number of cases and where the rate has grown the most since 2012; and it is dedicated to agriculture, since this sector absorbs 70% of these minors, followed by the services area, with 20% (31.4 million), and industry, with 10% (16.5 million).

The lowest common denominator is inequality. This is how Antonio Josué Díaz Rodríguez, Impact Technician at Ayuda en Acción considers it: “The greater the situation of social exclusion and poverty in the family and the less presence of the State and the weaker the public educational and social protection policies, the greater There is a risk of child labor and that it is more harmful and harmful to the health, development and well-being of the child ”.

Although the UNICEF and ILO study handle figures prior to covid-19, experts warn that the consequences of the pandemic “will be very serious.” Save the Children estimates that some 9.7 million children are at risk of never returning to the classroom. Michela Ranieri, an expert in foreign policy and humanitarian action at this NGO, regrets that this situation is not new: “During the Ebola outbreak in Sierra Leone, boys were employed in mining and retail trade, while girls were employed collecting firewood for sale. When the schools reopened, they were rarely encouraged by their families to return to the classroom. ” In the HRW report, the vast majority of the 81 children interviewed stated that they work because their families “did not have enough food” and that they continued to work “even after the situation improved relatively”.

For this reason, all the experts interviewed have the same effect: it is impossible to end child labor without promoting education and ending poverty. But how? Companies and their social responsibility are fundamental. Especially micro and small companies that operate at the lower levels of supply chains. “It is in them that the risks of child labor and the violation of other human rights are more pronounced”, dictates the report.

Thus, eradicating this “other pandemic” is also in the hands of the consumer. “The fact that the concept of child labor as such does not exist in Europe does not mean that we do not contribute,” explains Nieto. “The flowers we give away, the clothes we wear, the toys we buy and the jewelry we wear. It is very likely that, if you pull the production chain, there will be children’s hands involved ”.