Happy Sport the First watch .. Renewed version of the 1993 icon 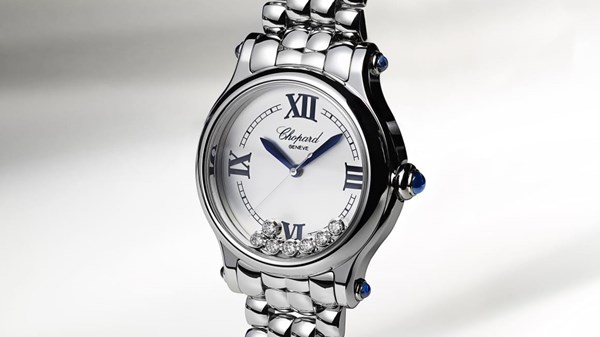 Happy Sport was created in 1993 to represent an innovative combination of steel and diamonds, and for nearly three decades, it has managed to fully preserve its modern character and captivating charm. Today, Chopard presents the watch (Happy Sport the First) in two limited editions, the first of which includes 1993 hours and the second includes 788 hours. With these two versions, Chopard reintroduces the first watch it created at the launch of this collection, to honor this authentic icon, with its legendary diamond stones and its “pebble link” bracelet. Chopard added important innovations to both of them, represented in the new Lucent Steel 223a watch case, which was redesigned to a diameter of 33 mm, based on the principles of the “golden ratio”. The watch was also equipped with a Chopard movement of caliber 09.01-C with automatic winding.

The pursuit of the concept of the golden ratio

A sense of proportion is crucial to Chopard, especially since it designed a Happy Sport watch to accompany women during all their daily activities. Therefore, women must first and foremost feel the pleasure of wearing it around her wrist in all situations and at all times. This is what Caroline Scheufele put it in 1993: “I wanted a watch that I could wear all day, whether I’m in the club, in the office, at a dinner party, or in town.” This pursuit has reached its goal of achieving perfection through the use of the golden ratio that determined the proportions appropriate for these new models within the group. This arithmetic balance has existed since ancient times in science, art and architecture in order to re-embody the harmony prevailing in nature.

By using the golden ratio in relation to the diameter of the movement designed by Chopard to power its range of women’s watches, Chopard has redesigned the Happy Sport watch case to a diameter of 33 mm, thus perfectly matching the size of a woman’s wrist. The final result was revealed in a watch of perfect proportions and proportions, accompanied by a bracelet of great beauty and delicacy.

A striking modern bracelet that beautifies a classic soul

Aesthetically speaking, the new Happy Sport the First is very similar to the original model introduced in 1993, as its round case is adorned with a muted silver dial featuring the Roman inscriptions for the hours in a shimmering blue color, echoing the inlays of the five sapphire stones on the cabochon pieces The vault, on the crown and the knobs of its bracelet.

In addition to all this, the charm of this watch lies in its bracelet with links consisting of four rows of pebbles, made in the watchmaking workshops of the House of Chopard. The bracelet is flexible in all its parts, just like the mesh design, to be able to embrace the delicate curve of a woman’s wrist. Thus, this watch re-embodies the concept of elegance and glamor through a creative masterpiece that is elegant and sporty at the same time. Each pebble of the bracelet was meticulously polished before being grouped together in seamless sequence, to make Happy Sport the First a masterpiece that radiates joy when worn or just seen.

Meditate on the dance of time

The five freedom-loving diamonds dance between the two layers of crystal glass on the dial of this classic-looking timepiece, representing the ancient legacy of casual elegance. Chopard invented the concept of dancing diamonds in 1976, and decorated with watches in the Happy Sport collection, which in turn changed the relationship of women with time. The woman no longer looked at the clock to not only know the time, but also to contemplate the diamond dance with its ever-changing movements as it floated over the dial. This dancing show of diamond stones is a technical achievement that few artisans can achieve, to ensure that each diamond in its moving capsule rotates and moves in such a way that its movement is never impeded.

Diamonds dance to the rhythm of the Happy Sport the First limited edition watch, which includes 1993 watches, and the number of which is determined to coincide with the year in which the first watch in this symbolic group was created as a kind of tribute. As for the second edition, it includes 788 hours as the lucky number of the co-president and artistic director of the House of Chopard, Caroline Scheufele. The second edition is decorated with a bezel set with diamonds and a dial made of mother-of-pearl inlaid. However, the general appearance of the two new models remains in line with the origins of the group, despite the addition of three new features by Chopard craftsmen that testify to their ancient expertise and creative brilliance.

The Happy Sport the First watch is a tangible testament to the rationality of the House of Chopard, whose vertical integrated approach allows it to equip the Happy Sport watch group with a Chopard 09.01-C movement consisting of 148 pieces. This movement is characterized by automatic winding and a reserve of Power for 42 hours, which has been completely designed, developed and produced within Chopard’s workshops. The diameter of this movement is 20.4 mm, and the measurement of its diameter was undoubtedly the main role in determining the measurements and proportions of the latest models of watches within the Happy Sport group.

An icon in the time of moral gold

Chopard is fully committed to the concept of sustainable luxury, and in this sense Chopard uses an innovative special steel to manufacture the cases of the two new versions of the Happy Sport the First watch, using Lucent Steel 223a, which has hypoallergenic properties, luster and durability superior to ordinary steel. Chopard has reached an alloy of this steel metal after four years of research and development, which has enabled it to place it today in the refineries of precious metals. Lucent Steel 223a is made with 70% recycled materials at a modern workshop in Austria, which reduces the carbon footprint of shipping materials to Chopard’s workshops in Switzerland.

In 1993, Caroline Scheufele picked up the spirit of her era by designing a sports watch that surprisingly and unprecedentedly combined steel and diamonds, creating a Happy Sport watch from this bold vision. Since then, this watch has celebrated the liberal approach and joy of life that women reinvent at the start of each new day to create the world they want to live in and the personality they want to be. Thanks to the dancing diamonds that “are happier when you are free” – as Caroline Scheufele’s mother described it when she saw the prototype of this new concept in 1976 – the Happy Sport watch offers a wonderful and ever-renewed display, in which the woman who wears the watch plays a role. Mainly; Especially since the movements of her wrist are what drives the rhythm of the diamond movement in the dance, whose movements are constantly rearranged. For its part, the Happy Sport collection is a strong analogy to the liberating momentum of women in the twentieth century. The group vividly reflects the strength of this lively life, as this group has presented itself from its beginnings to undergo a stream of transformations.

"Etihad Airways" begins operating on the "Iata Travel Pass" .. What is it?