Hamilton takes pole in the Sprint 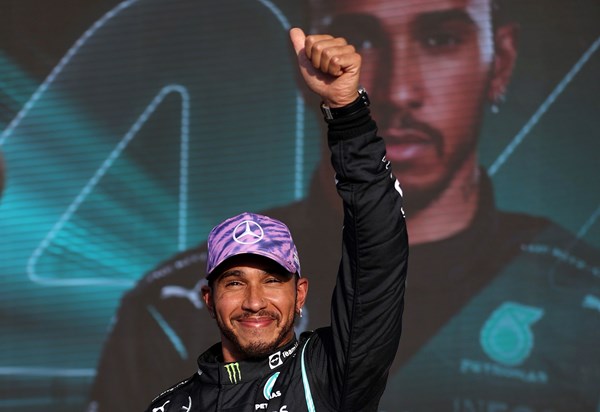 Mercedes world champion Lewis Hamilton will take pole position on Saturday in the sprint race for the British Formula One Grand Prix, after finishing qualifying with the lead on Friday at Silverstone.

It was customary to qualify for Saturday’s qualifying sessions, with Friday devoted to the two free practice rounds, but with the introduction of the “Sprint” race for the first time starting from the British race, which constitutes the tenth stage of this season, the drivers were satisfied with one free practice round on Friday, while the second round was replaced With the qualifying tests that determined the pole positions in the short “Sprint” race Saturday.

For the first time, the sprint race will be used instead of the regular official trials, as its points will be added to the 25 points awarded to the first place winner and a point for the fastest lap during the race.

The short race of 17 laps will be held on Saturday noon, similar to the traditional trials, with the final decision being the 52 laps starting line for Sunday’s race.

The step of the supervisors of the world championship to adopt the “Sprint” race, as part of an effort to increase the show and attract more young fans, will give the fastest three points, the second two points and the third one point.

The short race of 100 km without stopping will take about half an hour, and the starting positions were determined on Friday, through a qualifying period for an hour divided into three parts.

This means that the teams had only an hour of free practice on Friday, to find the best tuning parameters for the cars to suit the conditions of the track.

And after he finished the free practice round in third place, behind Red Bull’s Dutch driver Max Verstappen, his compatriot Lando Norris “McLaren”, and in front of Monaco’s son Charles Leclerc “Ferrari” and his Mercedes colleague Valtteri Bottas “Mercedes”, and the Spaniard Carlos Sainz ” Ferrari” respectively, Hamilton dominated the qualifying sessions and finished it in the lead against his Dutch rival, the winner of the past three races, to start from the front line for the 101st time in his legendary career crowned with seven titles so far.

The sprint will be repeated at the Italian Grand Prix, and a third, yet to be decided, later this year.

Hamilton wishes himself to emerge victorious from the “Sprint” race Saturday in front of his fans, who will be present with a number of up to 140,000 per day during the weekend, in order to obtain the three points allocated to the winner and enhance his chances of exiting victorious from his country’s race for the eighth time, by starting Sunday from first place, which will bring him back to the competition circle by reducing the 32-point difference that currently separates him from the brilliant Verstappen.

Hamilton and his Mercedes team, who have modified their car this week, especially on the floor, are hoping to regain their level after finding themselves far behind against Red Bull, who not only did Verstappen, but dominated the last five races after his new driver Perez won the Azerbaijan Grand Prix, and his teammate accepted him. The Dutchman in the Monaco Grand Prix.