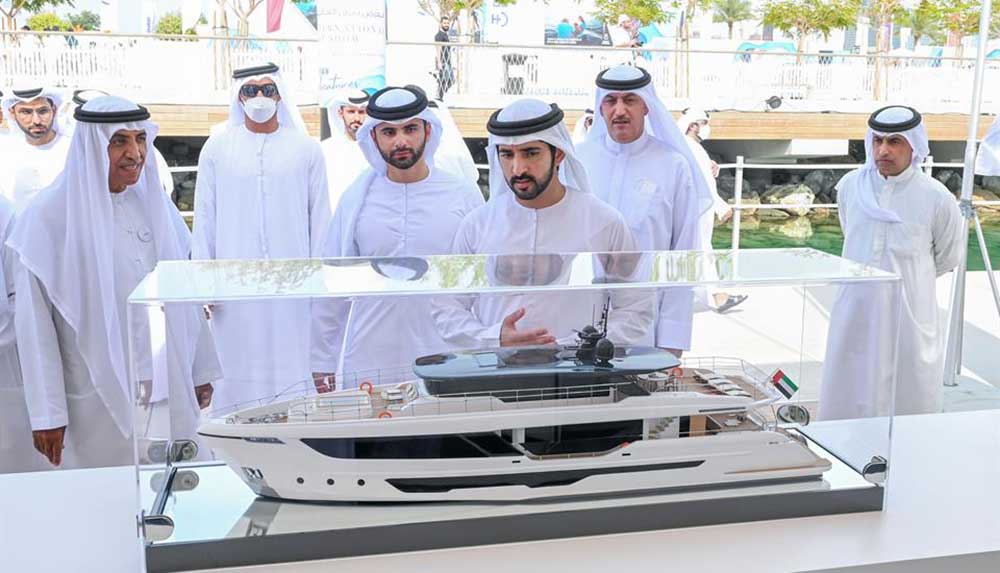 Under the patronage of His Highness Sheikh Mohammed bin Rashid Al Maktoum, Vice President and Prime Minister of the UAE and Ruler of Dubai, His Highness Sheikh Hamdan bin Mohammed bin Rashid Al Maktoum, Crown Prince of Dubai and Chairman of the Executive Council, inaugurated today (Wednesday) the Dubai International Boat Show, as part of its eighth session. The twenty, with the participation of 800 companies and brands from 54 countries, and in the presence of more than 450 boats and yachts of the most luxurious and prestigious yachts in the world.

His Highness the Crown Prince of Dubai stressed during the opening that the exhibition bears special importance as it is classified as one of the three most influential major events in the sector in the world, confirming Dubai’s distinction as a leading global marine destination, noting the great efforts behind Dubai’s achievement of this position, which resulted in the establishment of advanced infrastructure It takes into account the highest internationally approved specifications and standards in this field, just like in various other sectors in which Dubai has proven a qualitative superiority that earned it an advanced position as a model development reference on the global level.

His Highness the Crown Prince of Dubai toured the exhibition in its new headquarters in Dubai Harbor, accompanied by His Highness Sheikh Mansour bin Mohammed bin Rashid Al Maktoum, Chairman of the Dubai Sports Council, and Sheikh Saeed bin Ahmed bin Khalifa Al Maktoum, Executive Director of the Dubai Maritime City Authority. He was briefed on the highlights of the exhibition, as His Highness the Crown Prince of Dubai visited a number of pavilions of Emirati boat and yacht manufacturers, including Gulf Craft, which launched two new yachts on the first day of the exhibition. His Highness’ tour also included the platforms of a group of the largest participating international companies , such as “Ferretti”, “Lursen” and “San Lorenzo”.

His Highness Sheikh Hamdan bin Mohammed bin Rashid Al Maktoum stopped at the Dubai Maritime City Authority pavilion at the Ports, Customs and Free Zone Corporation, where he was briefed on the series of initiatives and services provided by the Maritime Authority to dealers in the maritime sector, and the interactive Dubai Maritime Map, which was launched for the first time at the exhibition. Through it, the definition of docking areas, recreational activities, tourist places, docking areas for commercial ships, in addition to prohibited areas.

His Highness was also briefed on the expanded diving area, which is hosted by the exhibition annually. This year, the area includes an experimental diving pool, along with a series of interactive talks about diving, sessions on underwater cinematography and exploring shipwrecks; Added to this is the Middle East and North Africa Diving Exhibition, which offers visitors the opportunity to purchase some of the most innovative products on the market.

His Highness the Crown Prince of Dubai was accompanied during the tour by H.E Helal Saeed Al Marri, Director General of the Dubai Department of Economy and Tourism and the Dubai World Trade Center Authority; and His Excellency Saeed Mohammed Hareb, Secretary General of the Dubai Sports Council, and a number of dignitaries and officials.

This year’s exhibition highlights the great potential of Dubai from a strong infrastructure that distinguishes it as a major maritime center in the region, and one of the most important global marine destinations.

The exhibition is scheduled to last five days until March 13, with a pre-registration requirement for all attendees. Boat owners, captains, divers and visitors from merchants have the opportunity to enter for free upon registration, while there is no possibility to register on the event website, and pre-registration is required through the following link: www.boatshowdubai.com.

The Dubai International Boat Show enjoys a leading position in the maritime sector in the Middle East, and represents a platform for displaying yachts, boats and the latest innovations in marine equipment and accessories, with the participation of exhibitors from the most prominent local and international manufacturers. The multi-award winning event showcases the latest recreational boats, equipment and services in the Middle East, in addition to the latest innovations in marine equipment and supplies.