Hamdan bin Mohammed: Dubai is expanding its partnerships within an ambitious vision 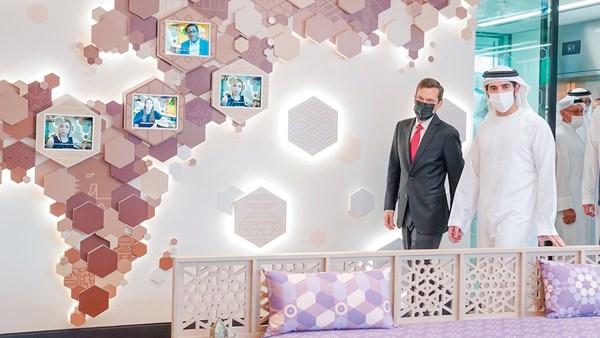 His Highness Sheikh Hamdan bin Mohammed bin Rashid Al Maktoum, Crown Prince of Dubai, confirmed that, thanks to the directives of His Highness Sheikh Mohammed bin Rashid Al Maktoum, Vice President and Prime Minister of the UAE and Ruler of Dubai “may God protect him”, Dubai continues to expand its partnerships with major global technology companies within An ambitious vision that aims to achieve leadership in creating the future, confirming its position as the headquarters of the most important technology makers in the world, with its advanced technical infrastructure, a supportive environment for business, attractive talent and encouraging investments.
This came during the inauguration of His Highness yesterday, the regional headquarters of the international company “Meta” in Dubai Internet City, in the presence of Sheryl Sandberg, Chief Operating Officer of Meta.
His Highness, the Crown Prince of Dubai, welcomed Meta International to join Dubai’s growing community of major institutions working in the fields of finance, business, technology and media, praising its choice of Dubai as its headquarters to serve millions of users of its platforms in the region. His Highness pointed out what Dubai provides to major international companies working in various fields of supportive climate for innovation and attracting the best talents and competencies, wishing the company success and affirming full support for its team in Dubai to enable it to achieve its goals and conduct its business in the best possible way. His Highness listened to an explanation from the leaders of Meta about the services it provides that constitute the next generation of social media images, which represent a real leap in this field. To consolidate its position regionally through its headquarters in Dubai Internet City. Meta’s regional headquarters serves the company’s clients in the Middle East and North Africa, and the new headquarters will allow the team of more than 100 employees to provide better services that meet the needs of hundreds of millions of users of the company’s platforms in the region.

His Highness was accompanied during the visit by His Excellency Mohammed bin Hadi Al Husseini, Minister of State for Financial Affairs, His Excellency Omar bin Sultan Al Olama, Minister of State for Artificial Intelligence, Digital Economy and Remote Work Applications, Hilal Saeed Al Marri, Director General of the Department of Economy and Tourism in Dubai, and Malik Sultan Al Malik, Director General of the Dubai Development Authority. and CEO of TECOM Group and Ahmed Abdullah Bin Byat, Vice Chairman of the Dubai Chamber of Digital Economy.
Malik Al Malik, Director-General of the Dubai Development Authority and CEO of TECOM Group, said: “Thanks to the vision and directives of the wise leadership, Dubai has been able to provide an attractive and competitive business environment that has attracted major international companies and provided them with opportunities for growth and expansion in the region and beyond,” explaining that “Dubai has laid foundations.” A well-established partnership with the most important technology makers for more than 20 years with the launch of Dubai Internet City, which has become today one of the most important technology centers in the region.” He added: “Dubai, through the business parks of the TECOM Group, including Dubai Internet City, and over the past twenty years, continued its efforts to build and consolidate a stimulating business environment that attracted more than 95,000 elite creative minds in the world, who played a key role in promoting The process of development and accelerating the pace of digital transformation locally and regionally .. We are keen to develop this environment and provide it with more elements of excellence in order to continue the path of success with our partners.” Meta works in the field of developing technologies that help people communicate and serve in business development. After Facebook, with its launch in 2004, contributed to changing the way people communicate, and then applications such as Messenger, Instagram and WhatsApp, Meta transcends the two dimensions. screens to new heights incorporating augmented and virtual reality to deliver the next generation of social networking technologies. Meta established its presence in the region 10 years ago, collaborating with various communities, creators, partners, media and government institutions, to enable the millions of people who use its platforms to create and thrive in the creative and expressive manner and methods they prefer. Meta platforms offer their services to different levels of users in the region, from individuals to major international brands, companies and entrepreneurs. For her part, Sheryl Sandberg said: “With our new regional headquarters, we affirm our commitment to the millions of people who use our platforms to express themselves, connect with loved ones and their communities, and launch and grow their businesses. The UAE community is characterized by a culture of innovation that is consistent with the spirit of our company. .. We share an interest in the economic and social opportunities that our interconnected and connected world can create.. Talented and creative people across the region will play a pivotal and essential role in helping to build the world of “Metaverse” that inaugurates a new chapter in our company’s journey.. We have chosen to be the opening of Our new headquarters will be on March 8, coinciding with the celebration of International Women’s Day, in a clear sign of our continued commitment to empowering women in Dubai and around the world.”

At the level of the Middle East and North Africa, Meta has strategic partnership relationships with many public and private sector institutions, which aim to make a significant positive impact on various sectors. The company has granted aid to more than 100 small and medium-sized companies based in Dubai, as part of its response to the consequences of the Corona pandemic. It also launched a center for training and providing business resources, to help businesses achieve growth through the “Meta Post” program.
On her part, Derya Matras, Vice President for the Middle East, Africa and Turkey at Meta, said: “At Meta, we are pleased with the work we have done and continue to do in the Middle East and North Africa… starting with the launch of the “Local Love” campaign. Our partnership to support small and medium businesses, as well as the SheCreates initiative, which provided a platform to highlight many wonderful female role models.. We will continue our work, which aims to make a large and broad positive impact.. and this would not have been achieved without the great support we received from our partners Which makes this day a special and important occasion for our history in the region.. It is very encouraging to see the commitment of the UAE to establishing solid foundations for this culture that stimulates innovation, creativity and prosperity.”
For his part, Faris Akkad, Regional Director for the Middle East and North Africa at Meta, said: “I would like to express my appreciation for the continuous support of the UAE, which has always emerged as a leader in innovation and an outstanding ability to achieve growth, despite the expansion it is witnessing. Our platforms, however, focus on the features and benefits that they provide to users, whose positive repercussions have helped many overcome the consequences of the pandemic, which posed unprecedented challenges. However, our platforms have succeeded in helping communities across the region express their synergy and cooperation with each other. Some, helping small and medium businesses reach their customers as widely as possible.. as well as helping newsrooms operate in a more digitized world and providing a platform where they can listen to people’s opinions.. these results continue to motivate us. Communities are an integral part of the Meta culture in the region, in light of the vision and common core values ​​that contribute to creating prosperous societies that help consolidate Meta’s presence in the Middle East and North Africa. Globally, today, there are more than 3 billion people actively using Facebook, Instagram, WhatsApp and Messenger platforms every month, of which, 2.91 billion people use the Facebook platform alone every month and more than 2.81 billion people on average use at least one of the Meta services every day.