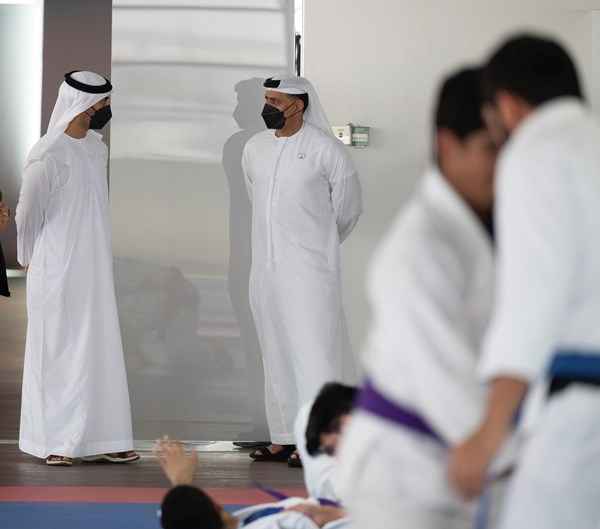 Abu Dhabi (Etihad)
H.H. Sheikh Hamdan bin Mohamed bin Zayed Al Nahyan inaugurated the largest gym in the capital Abu Dhabi in the Mubadala Sports Center in Al Bahia area, to be the second branch of the chain of gyms affiliated with the Federation, managed by a group of professional trainers.

Abdul Moneim Al Hashimi stressed that this important step aligns with the strategic vision of the Federation in promoting the spread of the sport of Jiu-Jitsu and its presence in society and in every home, to become a lifestyle that accompanies our generations, generation after generation.

He explained that the opening of such facilities with international standards paves the way to support and enhance the professional process for many talents who love sports in general and jiu-jitsu in particular.

Al-Hashemi extended his thanks and gratitude to His Highness Sheikh Hamdan bin Mohammed bin Zayed Al Nahyan for his generous sponsorship of the opening and his unlimited support for various sports projects, especially jiu-jitsu, which has become a title for the excellence of the people of the country and their ascension to the global podiums.

He added: The enlightened vision of the wise leadership and of His Highness Sheikh Mohamed bin Zayed Al Nahyan, Crown Prince of Abu Dhabi and Deputy Supreme Commander of the Armed Forces, the greatest supporter of the UAE sports march, represents a roadmap for sustainable excellence and brilliance for the sons and daughters of the Emirates. The new hall has great advantages as it is equipped with more than 200 sports equipment Cardio / resistance training; Which makes it a popular destination for everyone who wants to lose weight, strengthen the muscles of the body, as well as raise fitness rates. The two-storey hall offers a variety of group training classes, which include exercises on stationary bikes, in addition to yoga, Zumba, martial arts, and Jiu-Jitsu exercises, with a section for women to practice sports, including jiu-jitsu.

The President of the Federation indicated that the Mubadala Sports Center is equipped with a sauna room, a steam room, and changing rooms, and that new branches of this chain will soon be opened in the Emirate of Dubai and Al Ain.