Haaland is not for sale in the “Summer Mercato”! 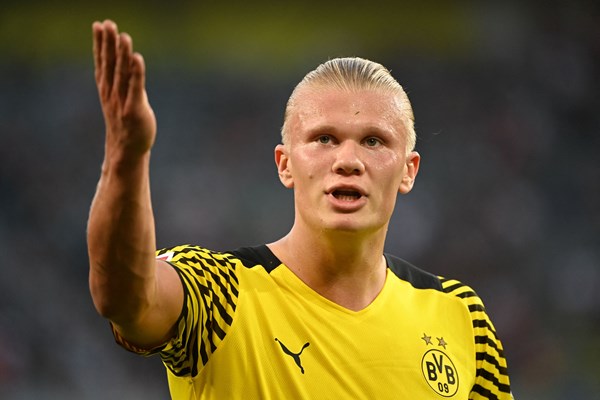 Anwar Ibrahim (Cairo)
Sebastian Kehl, the new sporting director of Borussia Dortmund, has stressed the fact that the big clubs in the German Bundesliga and Europe in general are now fully convinced that the team’s top scorer, Erling Haaland, will stay with the club at least this season.
Halland started the new season 2021-2022 with extraordinary brilliance, and scored two goals in his team’s last match against Eintracht Frankfurt 5-2, and Halland’s continuous brilliance attracted the attention of major European clubs, such as Bayern Munich, Manchester United and Real Madrid, but the Dortmund administration refused to change its initial position. Refusing to sell him this summer, and said: Haaland is not for sale during the current “summer Mercato”, whether the club received an offer for him or not.
Cahill confirmed that there is no chance of dispensing with his services this summer, despite the many rumors about him, and said: We were completely clear with Halland, his father and his agent Mino Raiola, and for this we are in a state of complete calm.

He added: Have you seen Haaland playing with the team?! He shines remarkably and is very enthusiastic to achieve victories and score goals, and does not preoccupy his mind with the idea of ​​leaving, and he wants to present an exceptional season in which he wins the “Bundesliga” championship.

Haaland has played 61 games with Dortmund, scoring 60 goals, since coming from Austrian Red Bull Salzburg in 2019.
It is noteworthy that Haaland, born on March 21, 2000 (21 years old), began his professional career in Bryan and from there to his Norwegian birth, then moved to Salzburg in 2019, and Dortmund succeeded in obtaining his signature for 4 and a half years, for 20 million euros obtained by his Austrian team. He starred from his first match in the “Bundesliga”, and scored 5 goals in his first two matches.

Haaland was eligible to play for the England national team, as he was born in the English city of Leeds, but he preferred to play for his native Norway, and starred in the FIFA U-20 World Cup in 2018. After scoring 9 goals in one match against Honduras, he was promoted in the same year to the Norwegian national team.