«Gulf» accuses a man of compromising its reputation and honor 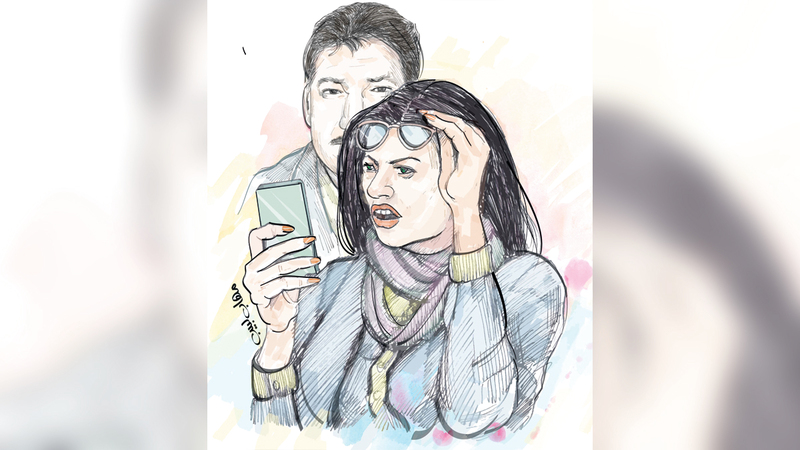 The Ras Al Khaimah Total Civil Court refused to compensate a (Gulf) woman financially and morally, who claimed that a (Gulf) man had harmed her reputation and honor and insulted her family, for the lack of a basis from reality and law, and obligated her to pay fees, expenses and attorney fees.

The plaintiff stated in the case file that the defendant filed a report against her stating that she had endangered his life while she was driving her vehicle on a road, and she denied what was attributed to her before the competent authorities, and a decision was issued by the Public Prosecution to cancel the penalty number for the case and save it after it was registered as a complaint.

She explained that the defendant tried to destroy her family, her husband and her son by accusing her that she was talking to him via “Snapchat”, and sending incriminating images to his phone, pointing out that her phone was seized by the competent authorities for a period of six months before the suspicion of the crime was excluded from her.

She added that he deliberately spoiled her life and her family and dismantled her family, as her husband suffered as a result of what the defendant had done by defaming her and attributing nude pictures to her, and that she was damaged in her reputation and honor.

She indicated that she was the victim of a malicious accusation and appeared before the police and the prosecution more than once until her innocence of the charges against her was proven, demanding compensation for all material and moral damages she sustained as a result of the defendant’s intentional accusation, which was represented by her losing her phone for six months and depriving her of using it and incurring it. Expenses of hiring a lawyer, and moral damages represented in accusing her of honor and consideration.

The defendant’s lawyer requested that the case be dismissed, explaining that the defendant had resorted to the police station to report a person sending obscene messages, insulting and cursing against him and his wife and family, and sent him indecent pictures.

The ruling stated that the plaintiff instituted her lawsuit by requesting the judiciary to oblige the defendant to pay her appropriate compensation to redress the material, moral and moral damages she had incurred as a result of his misuse of the right to litigation, as he accused her of endangering his life, and using one of the means of information technology to insult and slander him and assault his wife, And that he abused the right to sue by submitting a false report against her, which caused her damages as a result.

The court clarified that the Public Prosecution’s decision to file the investigations is in fact an order that there is no reason to file a criminal case, even if it is issued in the form of a filing order, pointing out that the order that there is no reason to file a case does not gain validity before the civil judiciary, as it is just a decision and not a judicial ruling, and the court has the power to re-examine What the order was issued in respect of it to determine whether there is what is described as a mistake or not on the side of the defendant.

She indicated that the evidence in the papers is that the defendant submitted a report without accusing anyone, but doubted the plaintiff that she had spoken to him on “Snapchat” on the grounds that she was his wife’s friend, and that she was not charged with committing any crimes since the beginning of the communication, and this is evidence of his good intention, and she was not It is established by a court ruling that the two notifications submitted by the defendant are false, and thus his civil liability is negated, and the plaintiff’s request to obligate the defendant to compensate for the damage has no basis in law and reality, and the court decides with him to reject it and oblige the plaintiff to pay expenses and attorneys’ fees.