Guardiola: I don’t regret Sancho’s departure because he asked to leave 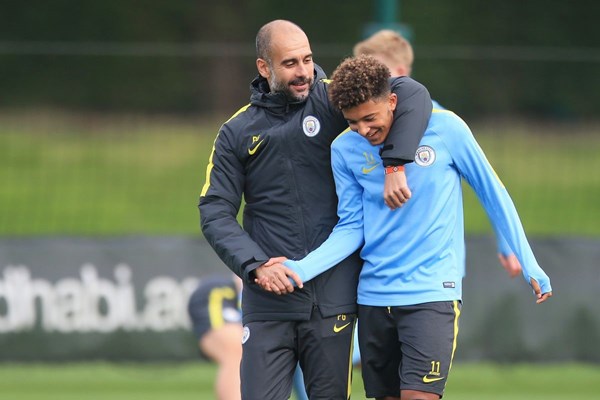 Although player Jadon Sancho has succeeded in becoming one of the leading football talents in Europe today, Spain’s Josep Guardiola has no regrets for letting the player leave Manchester City in 2017.
Guardiola expressed his happiness at the success of Sancho “20 years” with Borussia Dortmund.
The Champions League quarter-final draw was awarded to Manchester City’s English team against Dortmund, so the upcoming confrontation would be of a special nature for Sancho, who left Manchester City in 2017 for Dortmund.
Sancho left the English team to Germany when he was still seventeen years old, due to a lack of clarity for him regarding the promotion of players from the club’s academy to the first team.
The player’s decision to move to Dortmund came one season after Guardiola took over at Manchester City.
This was considered a courageous decision by the player, who played only 12 games for Dortmund in the Bundesliga during his first season with the team, during which he scored one goal.
However, Sancho’s star shone with Dortmund thanks to the promising talent of the player, whose features appeared clearly in the 2018/2019 season.
Now, Sancho has a chance to shine against his former club in the Champions League next month.
Guardiola said in a press conference: I said repeatedly that I do not regret it, he made the decision … He appeared in a great way with Dortmund, congratulations to him, he is an exceptional player, a player with great potential and performed well with Dortmund.
He added: We wanted to continue with our team, but he decided to leave, and when the player decides to leave, all we can do is let him go. I wish him all the luck except for his match in front of us. If he is happy, then I feel happy too.
Since the start of the 2018/2019 season, Sancho has scored 48 goals for his teammates in various tournaments, an increase of 22 goals from his colleague Marco Reus, who is ranked second among Dortmund players on the goal-making list during this period.
Dortmund won 72 of the 118 games that Sancho participated in.
During this period, Sancho scored 45 goals for Dortmund in various tournaments, to occupy the second place in the team’s top scorer list in that period, just two goals behind Erling Haaland.
However, Sancho beats Haaland and leads the team’s chances maker list with 251 chances, 101 ahead of second-placed Rafael Guerrero.
Among these opportunities, there were 56 opportunities that were classified as “big opportunities” according to “Opta”, given that the registration was expected to take place.
Sancho’s numbers also seem better than those of some Manchester City stars, and only Belgian Kevin De Bruyne is outperformed him at Manchester City, who created 343 chances during this period, including 87 great opportunities.
The number of goals De Bruyne created for his team-mates in the same period was 48, equivalent to Sancho’s number in this field.
De Bruyne ranks fourth among Manchester City players in the goal-making list, preceded by Raheem Sterling, who scored 69 goals, Argentine Sergio Aguero with 58 goals, and Brazilian Gabriel Jesus 56 goals.
Guardiola seems philosophical about Sancho; He said: No one knows, maybe he stayed with the team and we did not play well or better, every person decides his own life, and the others have to respect this decision … We wanted him to stay, but he decided to leave. We wish him all the best.
Seven of Sancho’s goals came through quick counterattacks, which underscores his importance for Dortmund when the team launches quick counterattacks.
Haaland is second behind Sancho in this perk, scoring five goals from quick counterattacks.
Guardiola is fully aware of the difficult task awaiting his team in front of this strong attack led by Sancho and Haaland.
Guardiola said of Haaland, son of former Manchester City player Alf Inge: We will face him and try to control him, we realize his potential, everyone knows.

Russia Expels 10 US Diplomats, Suggests Ambassador Return To Washington In Response To Sanctions