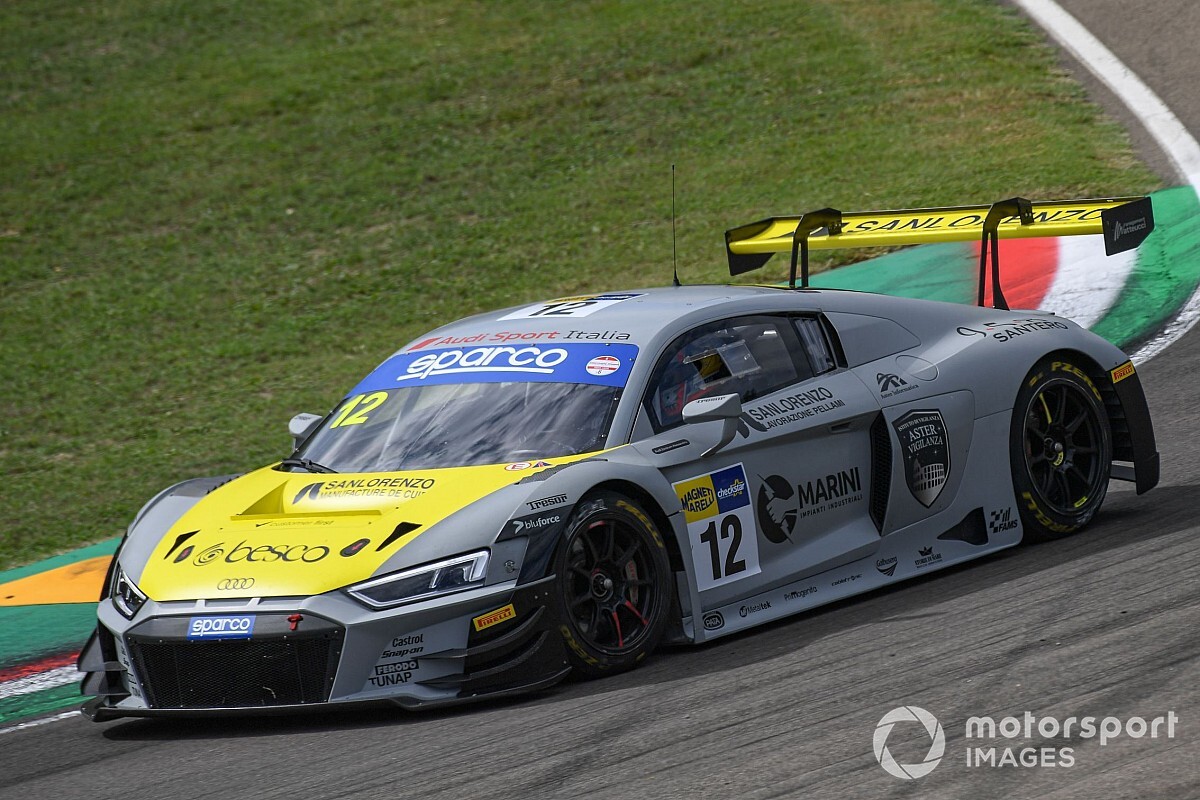 Free Practice 2 session of the Italian GT Sprint in Imola which opens with the absence of Nicolosi’s car, after the touchdown in the first session at the Piratella.

The asphalt this afternoon was decidedly warmer with 48th, first time for Earle-Schirò with 1’46 ”733 (Kessel Racing).

The two R8s immediately take the lead with Mancinelli-Postiglione and Ferrari-Agostini, third place for Crestani-Greco (Easy Race). Pegoraro-Mugelli (Best Lap) at the top of the Cups, but they are ousted by Risitano-De Marchi, but Cozzi-Sernagiotto fits between the two. Schirò-Earle improve and slip between the two Audi, Carboni-Romani take the lead in the GT4 with the Porsche of Ebimotors.

The leadership did not last long, thwarted by the best time of Di Giusto-Pera which dropped to 1’53 ”947. Di Amato fabled his Ferrari heads to the standings of the times with 1’42 ”339 ahead of the two Audi.

The first times begin to be canceled, Mann-Cressoni for cutting at T9. In Pro-Am Zampieri-Schreiner are leaders ahead of Guidetti-De Luca with the NSX (Nova Race) who shortly after overtake the Ferrari crew. Second part of the most eventful session, Di Amato in the lead ahead of Agostini-Ferrari and Crestani with the 488 GT3.

In the GT4 Di Giusto-Pera did not detach themselves from the leadership, second place for Carboni-Romani and Ghezzi-Cerati. Red flag at the end of the session, but just before the checkered flag Agostini-Ferrari jumped to the top of the overall and PRO rankings in front of Daniele Di Amato and the Greco-Crestani couple.

In GT4 everything crystallized with the “usual” Pera-Di Giusto ahead of Romani-Carboni and Cerati-Ghezzi. The day dedicated to free practice ends here, with the teams immediately working for tomorrow’s qualification.

As already mentioned, the GT3s will be on track exclusively with GT Cup and GT4 grouped in the next session. All this, due to the large line-up with 34 cars at the start.

Too bad for the weekend closed early for Nicolosi and La Mazza, which we hope to see again in the next appointment.

Santiago Giménez: the present and future of Cruz Azul