Growing at Orange, despite the fight against boredom in Zeist 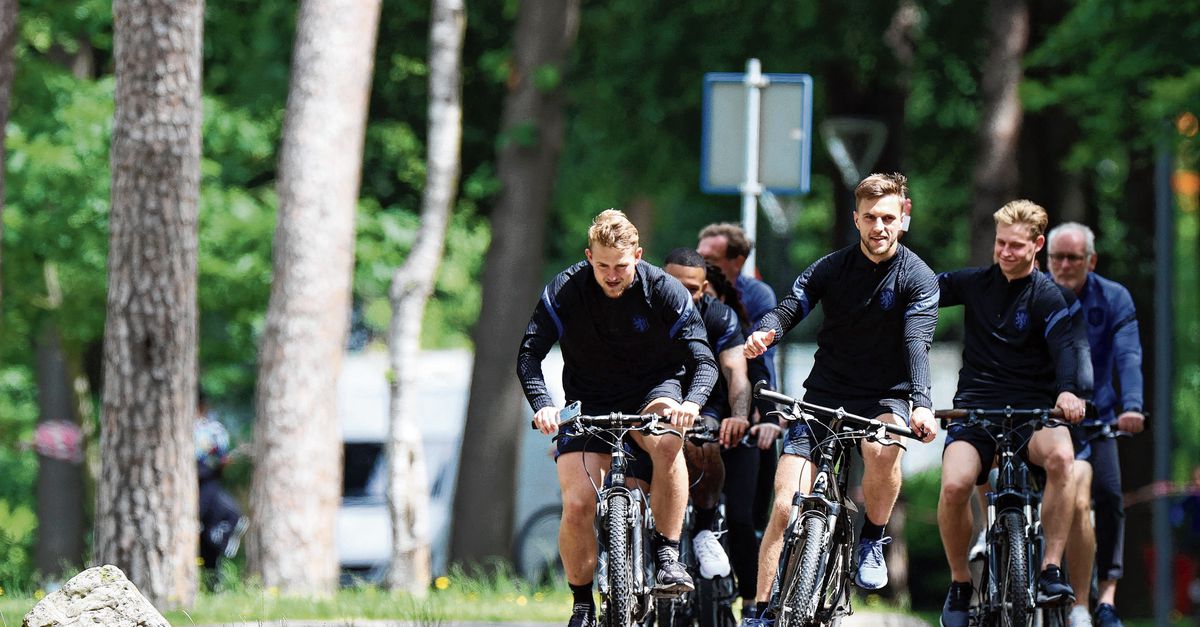 Marten de Roon’s parents and wife waved. He stood on the edge of the field in the Johan Cruijff Arena, together with the other Orange players, after the game against Austria (2-0). They waved back, gave kisses, held up their thumbs. More was not allowed.

No scenes like at the European Championship of 2008, when players with their children on their arms walked a lap of honor after winning matches. No family visiting the players’ hotel, like on the first day of the 2014 World Cup in Brazil, when Louis van Gaal had invited the loved ones of the players as a surprise. The Dutch national team is now locked in a bubble. In the woods of Zeist they are together with 25 players plus guidance – they see no one else. They regularly walk along the training field with their mobile phones. Only after a match can they look family and friends in the eye – from a distance.

“I found it quite difficult. You want to hug them, but you can’t. We know what we’re doing, we don’t want to run any risk, but maybe it’s easier to be far away at a time like this,” said De Roon. In the dressing room he had a chat with Patrick van Aanholt, De Roon said. He had seen his son in the stands and was having a hard time. De Roon: “Children do not understand anything about corona, of course, I notice that with my children myself. You want to grab them so badly, there is normally nothing wrong with that. That is difficult, but after that you have to move on.”

‘We can do much better’

Loss and boredom. That plays a role now that the Dutch national team has qualified as group head for the eighth finals of the European Championship, next Sunday in Budapest. Entertainment is scarce in Zeist, headquarters of Oranje. A game of padel (a kind of tennis, a hobby of the national coach), cards, table tennis, the board game Avalon, listening to music on orange headphones that Memphis Depay gave everyone as a gift, watching European Championship matches together, a game of FIFA on the game console, have a drink of water on the hotel terrace. The selection has already taken a boat trip on the Loosdrechtse Plassen – the guidance does everything to prevent boredom.

The match against North Macedonia, Monday evening in Amsterdam, can be seen as a training game. An important game, that is, because Frank de Boer’s 5-3-2 system – he prefers to talk about 3-5-2 himself – does not yet work perfectly. Against Austria, De Boer was busy coaching until the injury time. He pointed out how the team should be in the build-up, whistled again to direct a player to another position.

Afterwards, in addition to a cautiously blossoming Orange mood in the country, there was a lot of criticism. Former national coach Marco van Basten lashed out at Matthijs de Ligt, who in his eyes was badly positioned at times. “He has learned little in Italy,” said Van Basten at the NOS. De Ligt had seen that fragment, he said the following morning. He was actually quite proud that “Mr Van Basten” is engaged in his game. He is not concerned about the criticism, De Ligt said: “If it were only hosanna, it would not be good. Criticism keeps us sharp.”

It fits in with the story that surrounds Orange now. The team has to ‘grow’ – the most heard word in Zeist at the moment.

Frank de Boer, after the win against Austria: „The unity in the team is super important. That must be continuously radiated by everyone. Giving each other something, that’s how you grow together. That looks good at the moment.” Captain Georginio Wijnaldum: „I think we can do much better. We’ll see when we analyze the game. You always have to grow in a tournament.” De Ligt: “Every time we want to take a step.”

The options against North Macedonia: refine the 5-3-2 system or switch to 4-3-3 – a tactic De Boer thinks he will still need during the tournament. Most likely outcome: a combination. Plan first, then try.

Carrying players such as Wijnaldum, De Ligt and Denzel Dumfries have already said they would love to play, but De Boer has to deal with a large selection and does not want disappointed players who could negatively affect morale. Midfielder Ryan Gravenberch said this weekend that he hopes for “minutes”.

Steijn Spreij also plays an important role these days, who analyzes the physical data of the players and therefore knows how fit they are. Behind the scenes, that will help determine the changes in the team.

Also read: players with a lesser technique? Orange does not need eleven Messis.

Ruud van Nistelrooij reads names on the edge of the training field. His voice is deep, no one can be heard better in the stands. “Koopmeiners, Owen, Cody, Nathan and Donyell can wear a white vest,” he says. A party form on two small fields. Assignment: first pass six times, then score. Van Nistelrooij counts out loud, stirs up the rivalry a bit. When Quincy Promes scores a few times in a row, he looks on with satisfaction. Gravenberch yells: “Yes. Warrior!”

The morning after the victory over Austria, Van Nistelrooij had spoken to the players, Marten de Roon said during a press conference. Van Nistelrooij had talked about the European Championship in 2008. The Netherlands won spectacularly against Italy (3-0) and France (4-1) and was then qualified for the quarterfinals. In the last group match against Romania, almost the entire base team was rested. They sat – literally – with their legs up on the bench and saw the Orange win again (2-0). A few days later things went wrong against Russia – elimination.

Since then, the Dutch national team has been terrified of losing focus during a tournament. That word is a mantra of national coach Frank de Boer this European Championship. The fact that Van Nistelrooij had experienced the European Championship in 2008 was even one of the reasons that De Boer wanted him as an assistant. In addition, players look up to him. A “legendMemphis Depay called him last week.

Now was the time to share his story and that is what Van Nistelrooij did. This, he said at the end of a team meeting, is a moment when we can relax. We must not let that happen.

Frank de Boer looked on approvingly. During the press conference before the game against North Macedonia, he said: „You hope that Ruud van Nistelrooij will stand up at such moments and he has. It’s super important that they hear this from someone who has experienced it themselves and whom they look up to.” Marten de Roon had at least succinctly remembered the message. He said: “Right now we must persevere.”