Grandfather who murdered his grandson gives a cold statement: ‘I killed the scourge’ 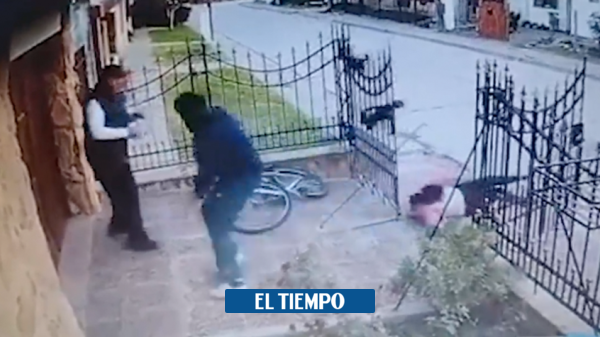 This is the case of Domingo Verna, the grandfather who killed his grandson with five shots during a violent argument. The story shocked Bahía Blanca, in Argentina, and is the subject of a judicial investigation in which the man is accused of having incurred in an excess of self-defense.

While the case progresses, the victim’s mother’s lawyer, Ignacio Jorge Yazyi, gave an interview in which he revealed the cold statements of the accused after gunning down his relative, Brian Verna. In this context, he assured that the ex-soldier’s attack was “premeditated” and said that he will request the change of cover to homicide aggravated by the link.

In dialogue with ‘La Brújula 24’, the lawyer maintained: “This event took place in a context in which there was violence between the two, and it was that way for a long time. Brian lived for years with the grandfather, who supplanted the role of his father. He was an authoritarian man and there was extortion, humiliation. He worked with him, who advanced him money and claimed it with interest. He rushed him, said that he was going to stay on the street and was constantly looking for him.

(Keep reading: Hunter of hundreds of wild animals shot in the head).

Pointing out what happened in mid-June, when Brian assaulted his grandfather and he entered his house, reached for a gun and then shot him, indicated: “Physical aggression is not justified, but on the day of the event, Brian did not get up wanting to attack him. At one point he crosses it and rebukes him. From what Brian’s partner said, he was demanding money back.”

“My parents never assumed that my son was mentally ill”

Brian Verna’s mother said the young man was on medication and said his father premeditated the attack.
A security camera recorded that the victim had previously hit the shooter. pic.twitter.com/rpN3Tez2n0

Later, Brian went to his grandfather’s house and attacked him first with a stick and then with his fists. “With the stick he never hits, he does it with his fist. The stick breaks on the ground and he doesn’t use it. I insist, it is not to justify it, but that has a motivation, where there is anger there is also pain”, Yazyi clarified and added: “The harassment came from a long time ago and that day also existed. We maintain that it was premeditated by the testimony of the couple, the grandfather yelled at him ‘I’m going to kill you’ at that moment”.

See also  Without shame: the kidnapper who sued his victims because they escaped

According to the lawyer’s account, after the threat Domingo went to look for the revolver and seeing Brian kick the door of his property, “Instead of having called the emergency services or a family member,” he shot him. “His physical integrity was not at risk at that time. She had been premeditating it and I think there was a weariness, ”she asserted.

“I killed the scourge”

The first person who is afraid is the daughter, Brian’s mother. He lives opposite, the defendant has cameras throughout the house that point to his daughter’s. He watched over the whole family.

Regarding the progress of the investigation, Yazyi reported that this week statements are being taken from relatives, neighbors and acquaintances and that once this stage is concluded, he will request the change of cover to “murder aggravated by the link.” In addition, he revealed that some of the witnesses are afraid of the reprisals with which the accused may respond.

See also  Pastor scammed a grandfather, took away his house and left him in debt

“The first person who is afraid is the daughter, Brian’s mother. He lives opposite, the defendant has cameras throughout the house that point to his daughter’s. He watched the whole family, he is an authoritarian man”, he expressed and added: “There have already been aggressions between them, threats. I don’t have the exact date. Keep in mind that he is an ex-military man, and that he knew how to handle weapons. His attitude was very cold, he did not come closer to see what he had done, a total disregard for the life of his own grandson”.

(Don’t stop reading: Lions in zoo would be eating themselves from hunger).

Along these lines, he recounted the alleged phrase that Domingo said after murdering his grandson: “The one who calls the ambulance is the girlfriend and declares at the police station that her grandfather himself had said: ‘I killed the scourge‘”.

Thus, he insisted that there was a preexisting desire of the grandfather to kill the young man. He considered that in the events there was “lack of sufficient motivation and there was no physical aggression, but there was against the property.” “Our hypothesis is that his life was not at risk, he could not have entered the Brian home. That is why the grandfather premeditated it, he waited for him to come back, ”he concluded.

– TikTok superstar accused of spying on and murdering his wife

– Julian Assange files an appeal against his extradition to the US.

Carrión adds another offensive and versatile piece with Borja Valle