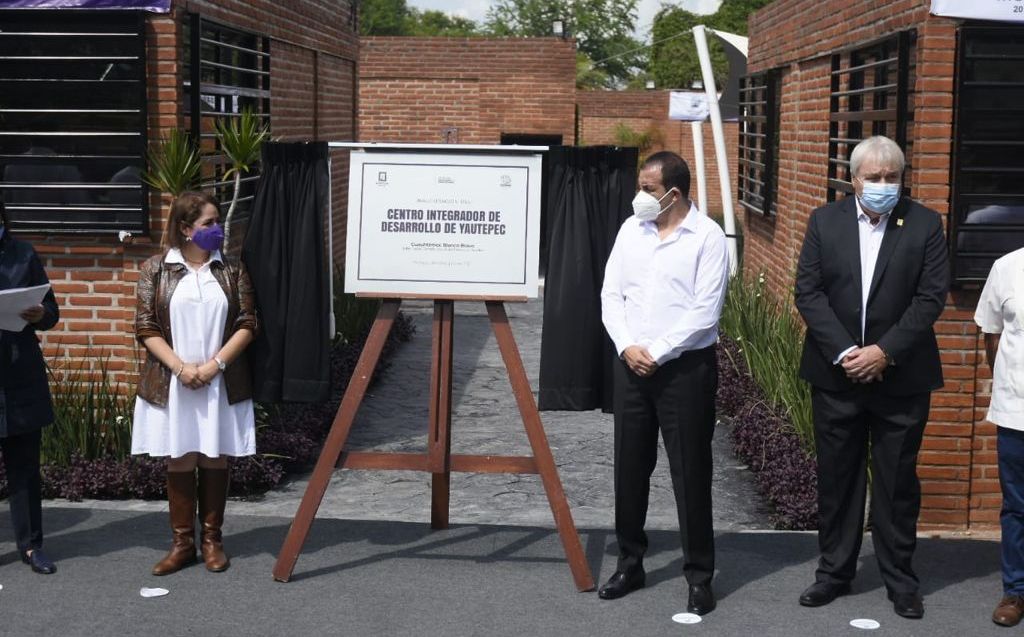 Governor Cuauhtémoc Blanco Bravo inaugurated an Integrative Development Center, in the municipality of Yautepec, Morelos, where he also witnessed the signing of the Collaboration Agreement for the Support and Strengthening of the Agricultural Sector, between the Secretariat of Agricultural Development (Sedagro) and the Roech Food Group.

The construction, equipping and operation of this space for coexistence and integration, located in the Barrio de San Juan, was achieved thanks to the coordinated work between Sedagro, the Secretariats of Social Development (Sedeso) and Public Works (SOP).

The Integration Center aims to create a development pole for livestock producers, and simultaneously contribute to the reconstruction of the social fabric, giving the general population the opportunity to learn a trade.

Likewise, Katia Isabel Herrera Quevedo, head of Sedagro, specified that timely attention is given to agricultural producers, by bringing the services of the dependency closer to the productive units, so that they are not forced to go from office to office.

He announced that in the place are the National System of Individual Identification of Livestock (Siniiga); the Regional Cattle Union of Morelos, and that they are requesting the installation to the Livestock Committee.

For his part, Jonathan Baltazar Mejía Alegría, general director of Social Infrastructure and Attention to Indigenous Affairs and Vulnerable Groups, of the Sedeso, explained that there will be multiple workshops for the generation of self-employment in the artisan, food, agricultural, artistic field and cultural.

He stated that “The most vulnerable groups will find an opportunity to learn trades and develop micro-entrepreneurial skills so that they can generate their own economic income.”

In addition, it will function as an exhibition and sales center for local community consumption and products may be offered to tourists arriving in Morelos.

In this event, Cuauhtémoc Blanco witnessed the signing of the Collaboration Agreement for the Accompaniment and Strengthening of the Agricultural Sector, which in this first stage benefits amaranth producers in the municipality of Temoac.

“Dignifying the countryside continues to be a priority for our administration, I celebrate the signing of this agreement in favor of the agricultural sector, it will be a very useful tool that comes to support the growth of our producers,” stressed the state president.

With this agreement, Grupo Alimenticio Roech will support amaranth farmers with technological packages, seeds and the commercialization of their product at favorable prices; the intention is to cover up to a thousand hectares with this benefit.

The governor assured that “this is proof of our commitment to you, we comply with actions and I thank the public and private sectors for teamwork, their confidence to invest in the Morelos field is important for the growth of the state.”

Similarly, he added that the inauguration and the signed agreement represent a step forward to meet the goals set in the State Development Plan 2018 – 2024.

José Manuel Sanz Rivera, head of the Office of the Governor; Samuel Sotelo Salgado, Legal Counsel of the Executive Branch, and José Luis Arizmendi Bahena, in charge of the office of the state representation of the Ministry of Agriculture and Rural Development (SADER).