Golf | There is a place in Vihti where the world stars of golf hit the balls along the woods: that is one of the reasons for the warm thanks Juha Ritvala received. 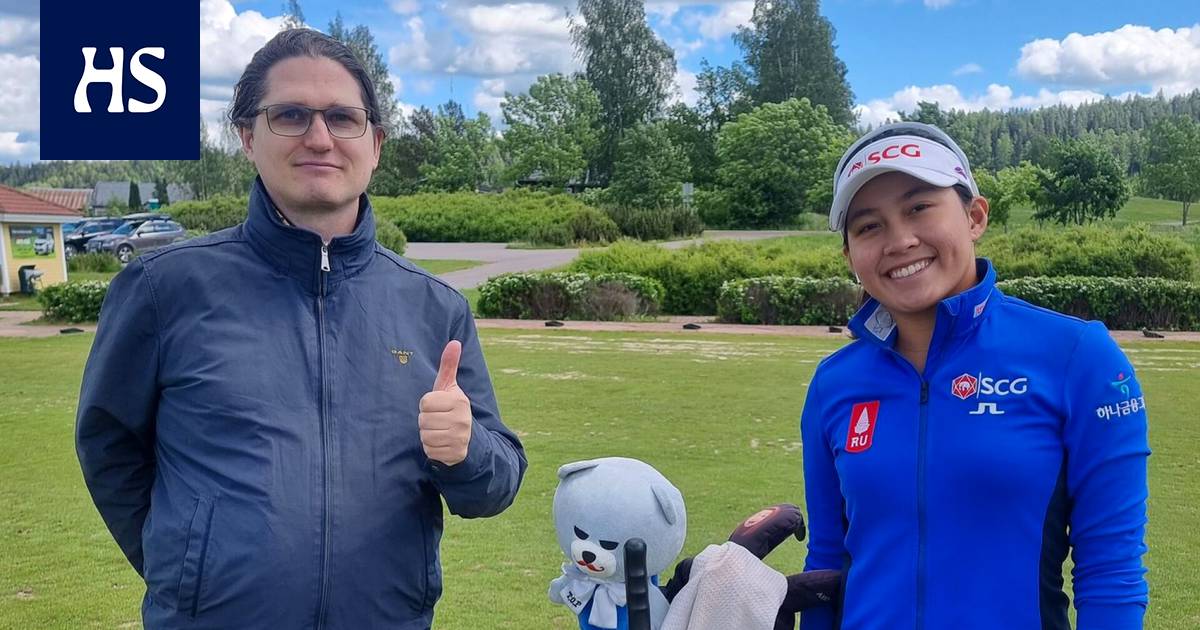 Atthaya Thitikul, a Thai who has become a world star in golf, practiced in Finland last summer. The success of Thitikul especially warms the opinion of Juha Ritvala from Vihti.

Special thanks To Finland.

Such were sent by an 18-year-old Thai Atthaya Thitikul at the end of last year, after winning by far the youngest ever in the European Women’s Golf Tournament (LET) season rankings, and immediately after earning second place in the qualifiers, he earned the right to play for the world’s toughest women’s professional tour, the American-led LPGA.

“Words are not enough to describe how grateful I am for the help I have received from Finnish people while I am in Finland. Specially Juha Ritvalan and the support given by his family was crucial. Without it, my team and I would not have achieved our goals, ”Thitikul said.

Juha Ritvala is an entrepreneur from Viht, who has lived in Asia for a long time, especially in Thailand. He was strongly influenced by the fact that Thitikul was a kind of summer Finn for part of last summer and got away without any problems to move from one competition to another during a corona pandemic in Europe.

Pandemian Thitikul, who played for LET, needed a base in Europe for the competition.

The initiative to practice in Finland came from Ritvala, which is known as a promoter of golf cooperation between Finland and Thailand.

Ritvala had known Thitikulin Manager for years Kanes Nitiwanakulin and assisted him in obtaining visas and other matters related to entering Finland.

Things went well, and Thitikul practiced on several occasions in the summer in several fields in Southern Finland and lived in the Helsinki region with his manager and professional staff.

“My visions were appreciated in Thailand right away, but I had to prove that I will be able to implement them several times before there is a sufficient level of confidence in the bigger things.”

Thitikul was only a 14-year-old amateur when he won the LET event in 2017 as the youngest player of all time.

As an amateur, he rose to number one on the world list, and his professional career, which began in 2020, has consistently progressed to the top.

On the world list, Thitikul has already risen to 14th place, and his career at LPGA has begun promisingly.

Last weekend, Thitikul finished fourth in the LPGA Tour competition in Singapore. It was his third race as a member of the LPGA.

Ritvala does not hide the fact that the success of Thitikul warms the mind.

“I am proud and happy for Atthaya and her team. For me, this is an important step forward in all work related to sports and golf, ”says Ritvala.

Ritvala says he has been working with the Thai Golf Association for seven years. Among other things, he has brought Thai players to the camp and the Erkko Trophy, the Finnish Open Amateur Championship, and has organized the unofficial Finland-Thailand amateur match, played twice, at home and away. Such events are by no means typical of golf.

“This has been a very significant thing for the Thai Golf Association and the current manager of Atthaya. It has built a really high level of understanding, competence and trust. ”

In the unofficial international match between Finland and Thailand in 2016, Pajaree Anannarukarn (second from left) played, who has now won the world’s number one tour with the LPGA. In the middle is the event organizer Juha Ritvala. Picture: Juha Ritvala’s home album

In 2016, a 22-year-old appeared in the international match played at the Hills side field in Vihti Pajaree Anannarukarnwho has already achieved one win on the LPGA tour.

The Finnish team included the country’s second player Sanna Nuutinenwhich, like Thitikul, acquired the right to play for the LPGA for that period.

More national matches are planned when the corona situation eases.

Oman Based on her experience, Ritvala says that building trust and cooperation with Asians takes time.

“Especially when I’ve come from outside of golf. My visions were immediately appreciated in Thailand, but I had to prove that I will be able to achieve them several times before there is a sufficient level of confidence in the bigger things. ”

Before arriving in Finland last summer, Ritvala assured the manager of Thitikul that everything was ready here.

“I said that we can get visas processed, we have training conditions, and the Embassy of Finland helps us get visas. While it is Corona time, we are taking care of things in order. They knew only someone incomprehensible force majeure would prevent that from happening. “

“A player needs to have the opportunity to be the number one visible in the world. That’s when these big companies are interested. ”

Ritvala states that Thitikul’s career would have been set back if, for example, visa matters had not been settled, because then the journey from one competition to another would not have been successful.

In Ritvala there is no actual golf background in itself.

“I’ve played about 100 rounds in my life. Instead, I played competitive tennis at a young age and coached a bit. ”

Nine years ago, Ritvala happened to meet his Finnish business partner at a golf networking event in Bangkok.

“He asked why Finns can’t do golf. I said that they are not developing internationalization enough. That’s when I went golfing. ”

Ritvala says that he initially started playing as a professional Janne Kasken as a supporter. Kaske now plays mainly on the Asian tour, and Ritvala is his manager.

“I learned to understand how Thai-Asian golf cooperation can be developed. I have seen golf for a long time as a networking and business tool for Finnish companies. ”

Ritvala is a humanist with a background in history, cultural anthropology and languages ​​in Germany.

“Learning the Thai language and culture went quickly. One needs to understand how that group dynamics and cultural learning work. They appreciate that the foreigner speaks their language. ”

According to Ritvala, Finland has had very little development of intercultural co-operation with Asia in world-important sports.

“Golf is one of the world’s major sports. In Thailand and Southeast Asia, it has broken into the top 3 species. As such, it is number one, especially in Thailand and a few other countries, ”says Ritvala, who has been doing sales in China for a long time in addition to Thailand.

According to Ritvala, for example, Thitikul’s sponsors are the largest companies in Thailand and Southeast Asia. These include the giant conglomerate SCG, which employs tens of thousands of people.

“A player needs to have the opportunity to be the number one visible in the world. That’s when these big companies are interested. ”

According to Ritvala, the popularity of golf is also growing strongly in Asia.

“That’s because Asian players, Koreans and Thais, are doing so well. Parents take their children to golf because it is a safe and healthy and also an educational sport. It also gives young people the skills to get along with people. ”

Ritvala says that her current main job is related to international consulting and the development of a work and learning center for Finnish companies in Thailand.

“Korona has sadly slowed its start, but hopefully it will be launched this year.”

Ritvalan Hospitality to Thai golfers has included inviting them to his home in Oravala, Vihti, where he says he has lived with his father’s family since the 16th century.

LPGA winner Pajaree Anannarukarn and Atthaya Thitikul have also been there. From the point of view of the top player, the visit has included a relaxed and exotic whimper.

Ritvala reveals that Oravala has a small private golf practice area, where the balls sink into the woods for shots longer than a hundred meters.

“Let’s get the players to hit the balls with my dad’s rackets in that forest. It’s been a lot of fun when the trees rattle. It’s kind of been a respite for players. We have then collected the balls out of the family in the autumn, ”says Ritvala, who says that in recent years he also took Thai junior players to pick blueberries.