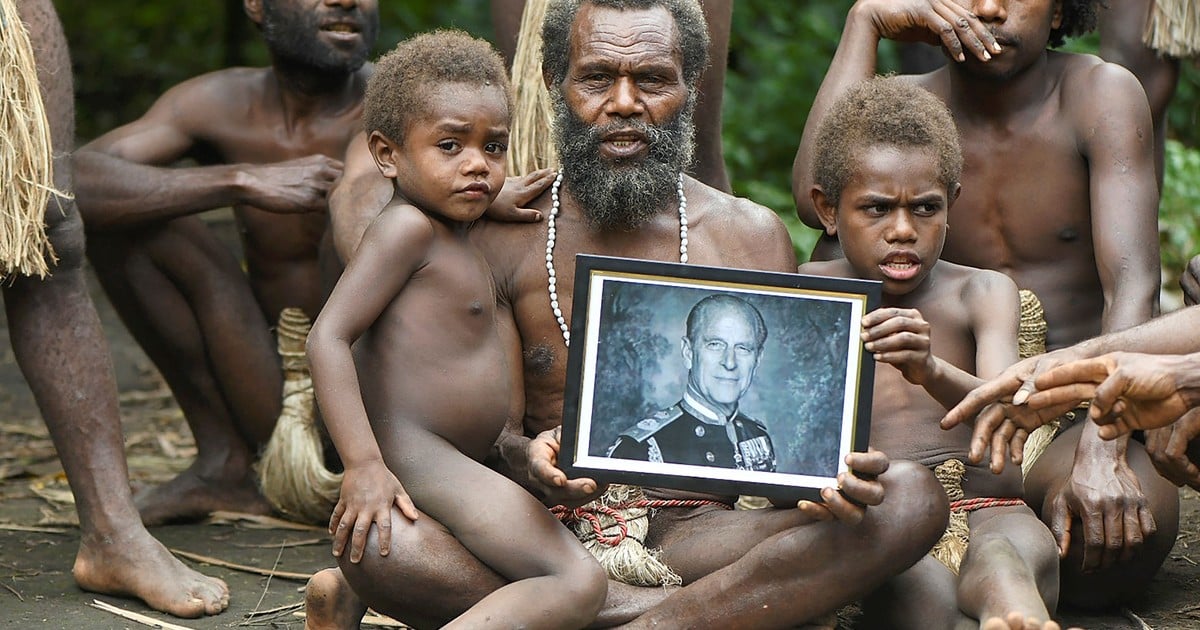 The prince’s funeral was held, he was buried, and it was over. Philip, Duke of Edinburgh, goes down in the history of kings and queens, English flags fly high again and his widow majesty’s subjects go on with their lives, until death do them part. On the island of Tanna, in the republic of Vanuatu, the mourning did not end, the rituals are just beginning. There in the South Pacific, 16,000 kilometers from Windsor Castle, the funeral festivities will last for a hundred days. That’s right. In Tanna, Prince Philip was not a mere royal consort, he was not just another European aristocrat. In Tanna Prince Philip was a god.

Immune to Christianity, Judaism, Buddhism, Islam or other worldly orthodoxies, the inhabitants of the tiny island praise the figure of the duke, whose photos adorn the walls of their houses like crucifixes in a convent. The Duke, understood as the reincarnation of an ancient spirit arisen from a volcano, it is the religion of the islanders, people whose lifestyle has barely changed in 3,000 years, whose lonely concession to modesty is that men wear a protective zucchini on their penis.

Commemorations for the duke’s death will include processions and dances accompanied by the mass consumption of a ceremonial drink made from the roots of kava kava, a tropical plant that induces relaxation and well-being. Herds of pigs, whose succulent meat is regarded by devotees as a divine blessing, will be slaughtered. That’s why when Prince Felipe found out about the cult of his person and sent them a signed photoThey responded by sending him a nal-nal, a traditional club to kill precisely the pigs.

Laugh, yes. Laugh. But not so much. Stop and reflect, dear readers. Stop and ponder those who believe, possibly with more religious fervor than the Tanna Islanders, in the divinity of a person who died two thousand years ago, whose story was written 100 years later. Those of Tanna do not maintain that Felipe turned water into wine, that he brought a dead man back to life or that he will walk the earth for 40 days before going up to heaven with his father.

Nor would they be convinced by the notion that a person with whom Philip spoke moved one night from Arabia to Jerusalem on a flying horse; or what Felipe will reappear on earth as a fly or a frog or a cow. They would find it especially curious that their god denied them the consumption of pork. And as for hell, the idea that for example the polygamists will burn forever in the fires of a dark underworld, they would say that Felipe is a generous god who would never think of such a cruel punishment.

But I want to think that they would not laugh, that they would say that other religions deserve the same respect as theirs, that each one is free to order their lives according to the rules they want and to seek consolation where they can in the face of the fearsome mystery of death. . No one should laugh at any religionFirst, because maybe one of them is right, and second, because as long as it is limited to the personal sphere, what is the problem? When compared, it could be proposed that the religion of the island of Tanna is kinder than others since it does not impose itself by force on those who do not share it.

In the half century that the cult of Philip has existed, its devotees have not launched into crusades, or jihads, or inquisitions. It could also be said that worshiping the figure of Philip is more dignified and honorable than worshiping those of Hitler or Stalin, the gods of the twentieth century religions, ideologies, those who believe that the goal of building paradise on earth justifies killing tens of millions of heretics.

Trump and López Obrador, two characters with fans who adore them. Photo: AP

Another reason not to scoff at Tanna’s is that they don’t do anything that everyone else doesn’t do, even those of us who don’t commune with any of the traditional religions or ideologies. Worshiping, reverence, paying homage is as human as eating or drinking. Look at the cases of Trump in the United States, or López Obrador in Mexico, or Maradona in Argentina. I do not absolve myself. I have as an idol a short man named Messi.

Laugh at me before the faithful Tannaenses. I have not stopped worshiping him despite the fact that the last time I was with him in the flesh he treated me with immeasurable disdain. But it didn’t make me question my faith. I understood that the right and proper thing was for the God of my particular religion to see me as an inferior way of life. I accept that the flea treats me like a rat because I understand that, to him, I am.

That neither I nor anyone else, then, throw the first stone or laugh against those who venerate Prince Philip. Analyzing the panorama in depth there is even reason to think that, of all the believers, they are the ones who have been correct, that they are the chosen ones of the Earth. God has freed them from the coronavirus, from Facebook and Twitter, from nationalism, communism, neoliberalism, fascism, Putin, Cristiano Ronaldo, and Cristina Kirchner. Something – a lot – they seem to have achieved with their hallucinogenic potions and their prayers to the Duke of Edinburgh.

They are not dogmatic either. One would think that Philip’s death would present them with a difficult theological problem to solve. That would be true if they responded like the Vatican to the question of homosexuals and their access to heaven, or that of women and their right to celebrate the sacrament of transubstantiation. But at Tanna they are flexible. God is dead. Long live God! There are already plans to replace Prince Philip with Prince Charles. Although the possibility of naming Prince William is also being considered. But let’s not worry. One hundred days giving nal-nal and kava kava will make the word of God flesh on the island of the South Pacific.

Covid-19, the week in America - PAHO warns of spikes in infections and deaths in South America