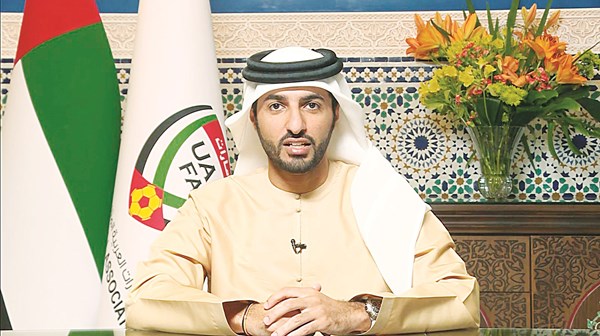 Abu Dhabi (Al Ittihad)
The work of the first day of the Global Sports Leaders Summit was launched today through visual communication technology, which is organized by the Abu Dhabi Sports Council over a period of two days as part of its agenda of global sporting events and initiatives that aspire to benefit from advanced global experiences and expertise, and to enrich the Emirati sports movement with more successes and stations of excellence.
The various sessions of the first day focused on discussing everything related to sporting events, during the pandemic, and many important issues at the local, regional and global levels.
In a recorded speech during the summit, Sheikh Rashid bin Humaid Al Nuaimi, President of the Football Association, expressed his happiness in reviewing the experiences and aspirations of the federation in front of a large number of global sport leaders, indicating that the federation, through the tournaments it organizes, was able to deal with the pandemic professionally, in accordance with the requirements of security and safety and the highest standards.
He also reviewed a number of strategic axes that will be fully launched during the coming period, which include major axes, starting with the national teams, the goal of climbing to the 2026 World Cup and winning the next Asian Championship, developing national centers for talent development, following up the state’s plans in the matter of naturalization, and increasing The number of registered players, professionalizing all clubs in cooperation with the Professional Clubs Association, developing commercial assets and the portfolio of partners for the federation in an attempt to achieve commercial sustainability in the federation, and communicating with more fans on a deeper level, which includes increasing interest in football among the younger generations, and enhancing Football relations with various countries, detailing strategic plans to develop women’s football, beach soccer and futsal football in the Emirates.
For his part, Aref Hamad Al-Awani, Secretary-General of the Abu Dhabi Sports Council, stressed during the opening dialogue session of the work of the Global Sport Leaders Summit that Abu Dhabi has dealt with the (Covid-19) pandemic by following the highest standards of precautionary and preventive measures, benefiting from the unlimited support of the wise leadership in this regard and its directions since the beginning.
Al-Awani said: “During our hosting of many international sporting events, we emphasized the necessity of having a negative test every 48 hours for all participants in these events, so we hosted the Indian Premier Cricket League for a period of more than 3 months, and we carried out examinations by 13,477 thousand PCR tests, as well as The Abu Dhabi HSBC Golf Championship was hosted, during which 2000 swabs were conducted, and recently we succeeded in organizing an impressive Emirates Tour from February 21 to 27, during which 2750 swabs were tested, and we also hosted the Abu Dhabi Tin Cricket Championship, and we performed 4,350 swabs. He added, “We have proven the UAE’s ability to deal with the pandemic, through many tournaments, most notably the Formula 1 Challenge and the USFS Championship, by following millions from different parts of the world, and by this we have sent a strong message to the whole world that we are able – despite the difficult circumstances – to move forward. On the road to development and prosperity ».
On the impact of community participation in the sporting events organized by the council, Al-Awani explained that many virtual community events were organized during the closure period, and then sports events were organized in limited numbers and in accordance with the safety requirements and measures in place at the highest level, and the focus was on community awareness, through Our various channels in social media, and we and our partners provided a model to be followed in light of difficult circumstances ».
During the work of the first day of the summit of global sport leaders, Lawrence Epstein, Chief Operating Officer at UFC, spoke about the future vision in the Middle East and North Africa, and Maiti Ventura, Managing Director of the Middle East and North Africa “LaLiga”, who talked about rights holders and how they exist in the East. Middle East and North Africa, Mauricio Suleiman, President of the World Boxing Council, and Amir Khan, a professional boxer, who talked about how to bring more events to the Middle East in the coming period, and Mike Raj, Managing Director of Asia Pacific and International Head of Strategic Consulting and Research at Nelson Sport, who reviewed the desire and aspiration of Fans to return again and safely to live and direct events, and Francesco Calvo, Chief Operating Officer of the Italian club Roma, who spoke about the risks and opportunities of private ownership in football, and what reform is needed to protect the game? Building a new stadium in the heart of Rome, opening new channels for revenue development, and Alex Brown, Vice President of Brand Management at ADNOC, who spoke at length about the types of attractive sporting partnerships for local brands, and the attitude of companies towards sporting events, especially during the pandemic, as I spoke during the day. The first, Dennis Barrett Baxendale, CEO of Everton Club, about working for a brighter future after (Covid-19), laying a roadmap to achieve long-term goals despite the pandemic and the latest developments of the club’s Bramley-Moore Dock Stadium and the Goodison Legacy project, and maintaining a strong relationship. With the local community, and excerpts from driving through a challenging year.

Editorial The risks and benefits of vaccines must be weighed, but the balance must be properly calibrated

4 controls for registering people of determination in public schools