Global health: 650,000 children are vaccinated against malaria in Africa 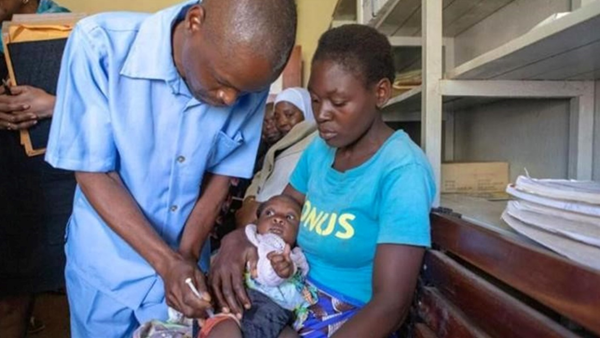 The World Health Organization announced Tuesday that two years after the launch of a malaria vaccine testing program, more than 650,000 children in Kenya, Ghana and Malawi have been vaccinated against the disease.
Specialized global advisory bodies are expected to meet in October to review data on the vaccine and consider whether it should be recommended for wider use.
The RTSS vaccine is the only one currently present that has been shown to reduce malaria in children, as it works against the plasmodium falciparum parasites that cause malaria, the most deadly in the world and the most widespread in Africa.
In recent years there has been a pause in any progress in the fight against malaria.
A World Health Organization report on malaria in 2020 said that progress against the mosquito-borne disease is stable, especially in African countries with the largest number of deaths.
The annual report published in November added that after the decline in deaths since 2000, when 736,000 deaths from malaria were recorded, the disease has returned and claimed about 411,000 lives in 2018 and 409,000 people in 2019.
In 2019, the number of malaria cases in the world was estimated at 229 million, a number that has remained at the same level over the past four years.
More than 90 percent of malaria deaths occur in Africa, most of them among young children.
The World Health Organization indicated that clinical tests over a period of four years showed that administering the “RTS” vaccine in four doses prevents 4 out of 10 cases of malaria, and 3 out of 10 cases of malignant, life-threatening malaria.

Out of the corona The government will announce in the morning how the interest rate restrictions will be lifted - Direct broadcast at 9 p.m.

Pakina | Anna-Maja is feeling bad, Mattia regrets and Sanna has been arguing with Petter – rebel Kuukautinen talks about the government’s May Day mood