Gibraltar, the oasis between Spain and Great Britain where it is no longer mandatory to wear a chinstrap 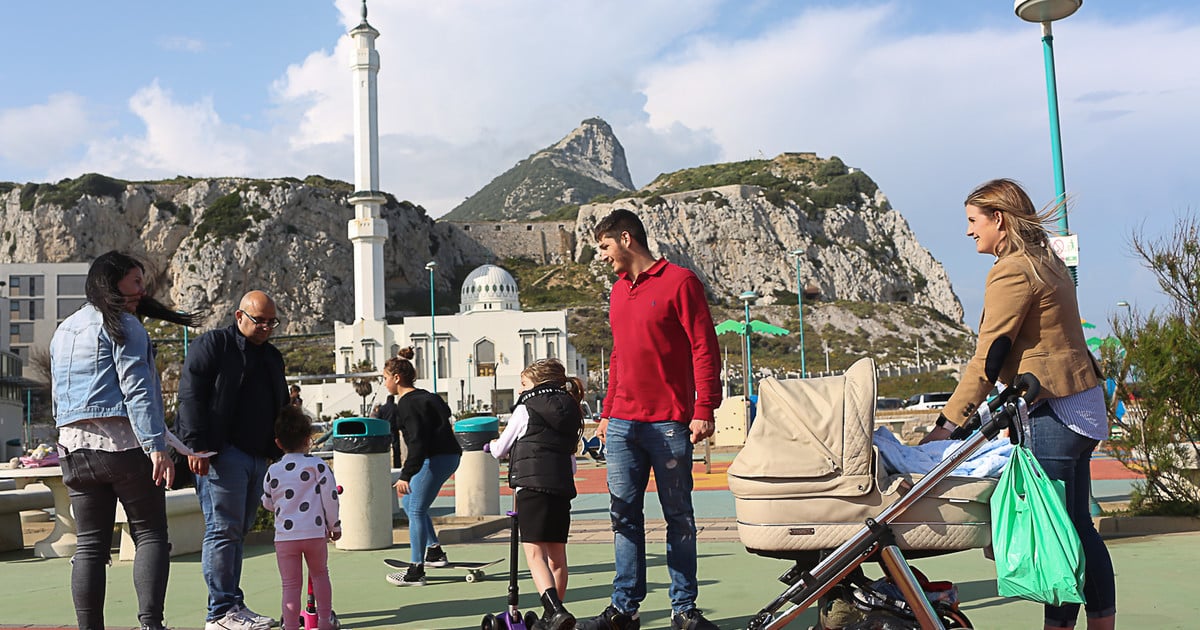 At the border post of La Línea de la Concepción, between the migration agents of Spain and their colleagues from Gibraltar there is little distance and a detail that, in the covid era that we live, impresses: those of Gibraltar they do not wear a chinstrap.

They converse, joke and encourage each other. days of little movement in the immense parking lot that surrounds them, desolate between the Spanish border and the almost 7 kilometers of British colony, closer to Africa than to the United Kingdom, which the English guard since the beginning of the 18th century.

Gibraltar recovered the smiles, the grimaces, the mouths of its people. With 85 percent of the population who agreed to be vaccinated Already immunized, in this slice of British territory in the southern tip of Spain, since the end of March it is not mandatory to wear a chinstrap on the street.

There is no curfew or limit of diners to gather around a table, restaurant or home.

“From the age of 16 we have vaccinated the entire population that agreed to be vaccinated. There are more vaccinated than population ”, he tells Clarion Lorena Soler, the 47-year-old Argentine doctor who moved with her family to Gibraltar in 2018, where she is a pediatrician at the only hospital for people on the rock, St Bernard’s Hospital.

“In the last two weeks we have not had any positive case or hospitalization,” adds Samantha Sacramento, Gibraltar’s Minister of Justice, Equality and Health, to this correspondent.

A street in the heart of Gibraltar, this weekend. Photo: Cezaro de Luca.

“We have a population of approximately 34,000 inhabitants. In addition to our residents, we have vaccinated 15,000 workers who live in Spain and come to work ”, details Sacramento.

“96 percent of people over the age of 60 got vaccinated. Which shows that the younger age group is where the population declined to be vaccinated ”, explains the minister.

“At the end of 2020 we started Operation Freedom, our vaccination program with the doses provided by the British government,” he clarifies. We have used the Pfizer, which is very delicate and its transportation process is complex. We also had access to some doses of AstraZeneca. Not as an option but we have offered it to those people who were clinically allergic to the Pfizer vaccine. “

It was the case of Lorena: “I am very allergic and that is why, along with some cancer patients, they vaccinated us with AstraZeneca a little later, but at the end of February we were all immunized,” says the Argentine pediatrician who was born in the Saavedra neighborhood. .

The Gibraltar government’s Facebook page updates the pandemic figures daily. “Stay two meters away from others, wash your hands for 20 seconds, call 111 if you have symptoms,” is the final recommendation of each official party.

The Rock of Gibraltar has already vaccinated 85% of its population against the coronavirus. Photo: Cezaro De Luca.

A card for the vaccinated

“We give the vaccinated a card, which is like a credit card granted by the government of Gibraltar, with the data that identifies the person and the dates on which they received the doses of the vaccine,” says the Minister of Health of the rock.

“The card does not grant permissions to the person because it is not mandatory and as the percentage of people vaccinated is so high, we do not deliver it as a health passport but so that the person has it as a record of when they were vaccinated,” says Sacramento.

“It is not a requirement for any social purpose but we had a boxing event in which 500 people participated who were able to access because they were vaccinated, as well as a soccer match for the World Cup qualification. But it was only a pilot project ”, clarifies the official. 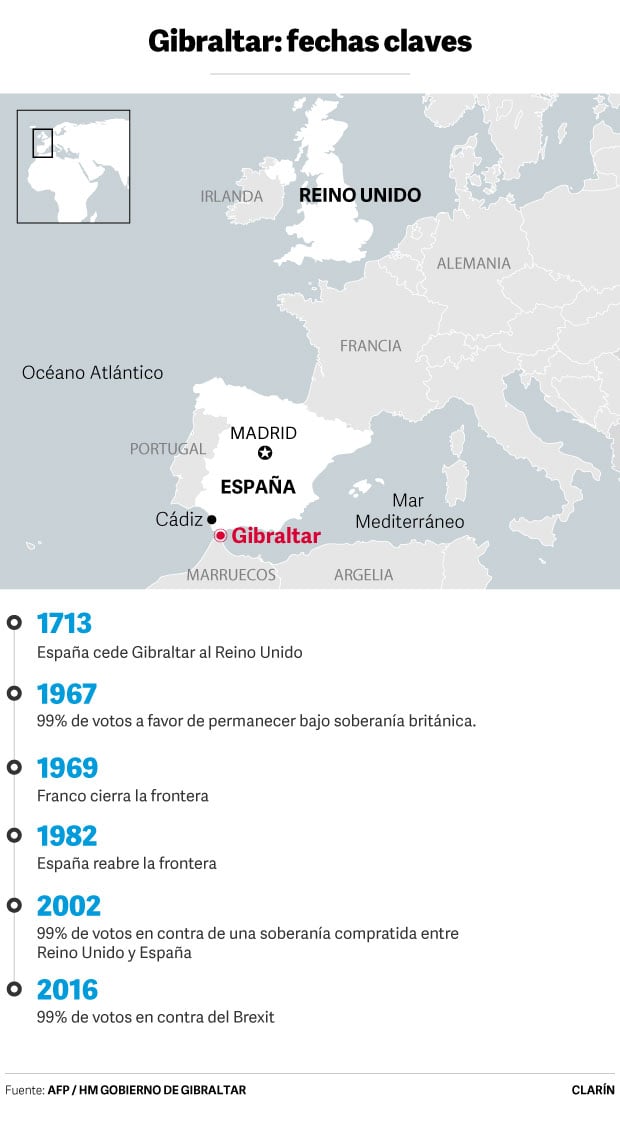 From tragedy to resurrection

“There is also a military hospital here. The first 500 vaccines were for the military who, during the first wave of the pandemic, set up a hospital in the Europa Stadium with 200 beds that were not occupied because we had no patients, ”Lorena recalls.

This Argentinian lives in Gibraltar with her husband, Mariano, her minor children, Emilia (11), and Pancho (10) and her nephew Iván, a River fanatic who circulates around the rock with the millionaires’ official diver and has just left the homeland to look for work in Gibraltar. Lorena’s eldest son, Manuel, studies music in Madrid.

“After summer came, we all went to the beach. Y in December, in the middle of the second wave, the whole world was infected says Lorena. We became first on the world mortality list per million inhabitants. The focus was on the nursing home, where the people who died were over 90 years old. We had 94 dead. A tragedy for Gibraltar ”.

In Gibraltar you pay in pounds, but euros are also accepted. Photo: Cezaro de Luca

Today, daily life on the rock seems to have overcome that heartbreaking postcard. Although it is difficult for an outsider to get used to the wind ruffling mercilessly and the dark blue waves crashing against the lighthouse as if it wanted to knock it down, the Europa Point park is overflowing with life, of which we once had: children at playgrounds and adults chatting, drinking beer, laughing.

Between Spain and Great Britain

In the last 50 years, Gibraltar was asked twice if it wanted to remain under British sovereignty or accept a joint guardianship between Spain and the United Kingdom.

There were two referendums in which the “no” won out of the protective English sky. Although they participated in the vote on Brexit and 95.9 percent of the people said they wanted not to leave the European Union.

By the so-called “New Year’s Eve Agreement” on Gibraltar, Madrid and London agreed at the end of last year that the British colony remain in the free movement zone known as the Schengen area.

What they still have not managed to reduce is the number of diplomatic complaints between the United Kingdom and Spain for incursions into territorial waters or in the airspace that is still disputed.

On a Sunday like this, the Plaza Grand Casemates on the rock, one of the most popular in Gibraltar and accessed through arches as if entering a closed enclosure, is pure hubbub.

A map of the center offers, for a euro or a pound, to take a plant of the pocket city and the fast food places invite, for 10 pounds, “fish and chips” (fried fish and chips).

In this square that twenty years ago was a large car park and which until 1864 was the scene of public executions, today there are Andalusians who cross the border from Spain and offer, for 20 euros, guided tours to the top of the rock to see the macaques, an attraction of the colony.

Gibraltar has about 300 Barbary monkeys, an endangered species, which represent the only colony of monkeys from Morocco and Algeria that still live in freedom in Europe. And that they tend to lose their shyness until they climb on the heads of visitors who dare to visit them, even if the recommendations indicate not to get too close to them.

Here where the currency is the pound -although euros are accepted-, taxes are lower and cars circulate as in the rest of Europe -not like in the United Kingdom, where the one-way hand travels on the left-, its population speaks “flat”, a mixture of English and Andalusian.

A tangle of 52 kilometers of tunnels Built during the Second World War to take refuge in the event of a German invasion, it runs through the subsoil of the rock that, according to mythology, guarded one of the two columns of Hercules, a landmark that marked the end of the world for the Greeks.

In Gibraltar, where John Lennon and Yoko Ono celebrated their express wedding in 1969 to avoid paparazzi and devotees, restrictions are almost gone with which we are overwhelmed by the pandemic. Its people are beginning to feel that that daily life that the coronavirus took away from them just over a year ago is possible again.

At more than 400 meters above sea level, the orange tones of sunset stain the rock until almost 9 at night. One more day without covid in “the rock at the end of the world”, as Lennon used to call this British rock on Spanish soil.