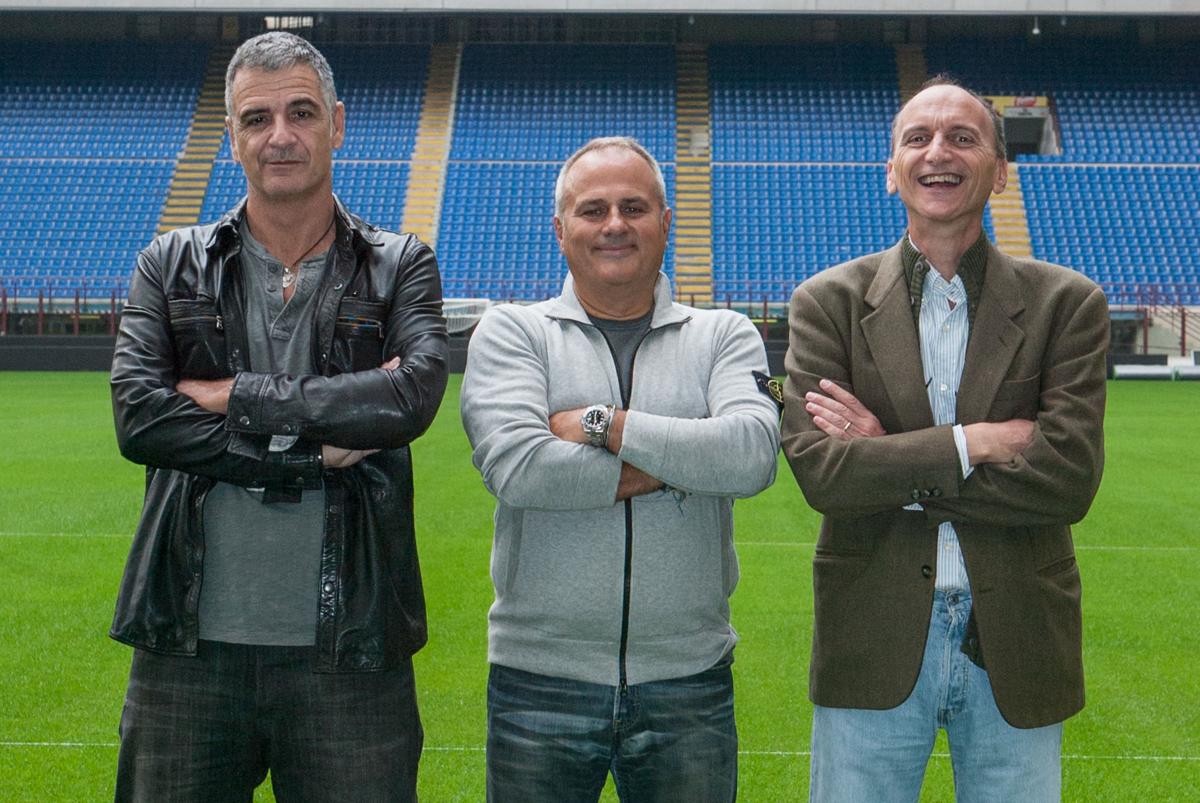 The very popular and historic trio (Milanese doc) of Gialappa’s Band celebrates 35 years of honorable career. It was the year 1986 when, in Mexican stadiums on the occasion of the 13th edition of the Soccer World Cup, Marco Santin, Giorgio Gherarducci is Carlo Taranto, surprised and delighted Italian radio viewers with their hilarious gags. After that, an unstoppable crescendo, from “A fantastic tragic Friday” (first appearance on the small screen) to all the unforgettable “Never say”: “Banzai”, “Gol”, “TV”, “Mundial”, “Big Brother” , “Maik”, “Monday”, Reality, “Candid” and so on and so forth. And again, Zelig, Le Iene, Fininvest which later became Mediaset, Rai (Quelli che il calcio ”,“ After the Festival ”etc.) and again the return to the Biscione networks. Always in step with the times, in 7 decades, the “Gialappi” have collaborated with all the main protagonists of the recent history of Italian television: from Aldo Giovanni and Giacomo to Antonio Albanese, from Claudio Bisio to Luciana Littizzetto, from Paola Cortellesi to Fabio De Luigi, from Maurizio Crozza to Nicola Savino, from Neri Marcorè to Alessia Marcuzzi (just to name a few).

But to tell us about part of their extraordinary adventure (since the beginning) is Marco Santin, today – together with Giorgio Gherarducci – grappling with a new and exciting experience: “Twitch say Europeans” (dedicated to Euro 2020), since, innate precursors, they have been able to wisely seize yet another opportunity through the potential of the emerging livestreaming platform, obtaining, in a few weeks, surprising results.

Marco Santin good morning. A 35-year partnership with Giorgio Gherarducci and Carto Taranto. Everything starts from …

From popular radio, where we made the “verse” to the very few football broadcasts of the time proposed by Rai, sifting through and making fun of the bias of the then sports reporters. But it is the “Mexico ’86” World Championship – won by Maradona’s Argentina – that marks our real professional start.

And then comes the TV.

Already, the first program was “Never say Banzai”, even if our television career both as authors and as conductors must be traced back more precisely to “That fantastic tragic Friday” with minute by milking soap operas. “Never say Banzai” was an extraordinary success, he introduced us to the general public, it went really well, even against some not too favorable predictions.

Yes, right. 30 years is a life, a painful transition, but at that moment it was right to do it. On “Le Iene” I can confirm that we feel it as our home, and with Davide Parenti there is a very strong bond. We started with him on “Mai dire tv” and then moved on to “Le Iene”, a cult program that, in various respects, made the history of television. We are proud to be part of it. Probably when we went to Rai it was for a reason of few spaces, but then we were called back for “The Big Brother”, the “Island of the Famous” etc. etc ..

Pandemic from Covid-19, how did you experience it?

The pandemic certainly did not help much, in every sense. Beyond the fears and the initial disorientation, the sector also suffered from the long lockdown. We stopped, “Le Iene” I mean, because one of the editors had tested positive. We have been stuck for several months. Practically, apart from an episode of the second series, the stop affected the period from March to September 2020. Now we hope that the vaccines run their course and the bad story will gradually improve until it finally comes out. We all hope so.

Marco, 35 years of unconditional love or were there also critical moments between you?

Even in the best marriages there are problems. There is no doubt about this. As far as the professional and working aspect is concerned, we have always found ourselves in agreement. Three minds one thought, perhaps this was our true wealth. Only Carlo, on some rare occasion, turned away a bit but only for personal reasons, not for other reasons. One year, at “Quelli che il calcio”, we did not have his presence, but otherwise the union has always prevailed, indeed, I would dare to say strength. But after three decades, a few small ones, let’s call it a “screzio”, can be there.

Only business relationships or even friendship? And… is there a leader within Gialappa’s?

A life together. We are friends of course, perhaps at the beginning there was more attendance even outside the “studios”, then, over time, even for a purely family discourse, the roads divided a bit. However, relations are excellent, we love each other. We have always given courage to each other, especially in the complicated periods of each of us. Mutual human support has never been lacking. As for the leader, absolutely not! No leader and / or doer. Between us there is the 2 to 1 rule, being in 3 the majority decides. It is the law of democracy.

D. Radio, TV, but on some occasions also screenwriters and / or authors

Yes, Giorgio – for example – worked in the films of Aldo Giovanni and Giacomo “Three men and one leg” and “This is life” and – again for them – we wrote a play. There has also been cinema in our careers. The 1999 feature film “All the moron men” was one of the most engaging experiences of my life. As they say: “Whoever stops is lost”. Always moving.

Well, without a doubt the Radio, I cannot fail to mention with Giorgio at R.101 and only three years at Radio 2 in a program called “Thank you for choosing us”. Among other things, it also won the award for the best radio program of 2010. Radio is the thing I do best ever. I succeed in a way that I consider optimal. Because it is a magic, a real magic. Secondly comes football, of which I have always been a great fan.

News on the “Hyenas” front?

What can I say, certainly sorry for the farewell of Alessia Marcuzzi, with whom we have a ten-year relationship. His choice, but I think dictated by the right reasons. It does not seem correct to say anything else at this juncture.

And now let’s go to the name. Gialappa’s, where does it come from?

Our name says it all. At Mediaset we did (as already mentioned) “A fantastic tragic Friday”, but four names (at the time we were 4) in the credits were too many. We were asked to coined a so-called “stage name” for the group. And here the 1986 World Cup in Mexico and Montezuma’s revenge return to the scene. Gialappa is a Mexican tuber, in those summer days it was often used by us during the commentary. There were shadows on the football fields, huge shadows from the stadium lights that stood out on the pitch. Ironically, we started calling them james. I remember that people did not know what they were, nor did they know this curious term and from there we started with “Gialappa’s band”. And to think that the producer told us it would never work. Instead, the idea soon hit the media and we won the “little challenge”. The rest is there for all to see.

“Twitch say Europeans”, how is this new adventure going?

Well, very well, beautiful adventure, born by chance 10 days earlier. In reality we had an agreement already last year with a national radio but the pandemic stopped everything. This year Carlo, due to various problems, was unable to join and the previous network took a step back. Until a few weeks before the kick-off, it was decided that for the first time, in thirty years, we would (finally) see a football competition from home and – like so many Italians – comfortable on the sofa. And yet this was not the case. A few days earlier a friend proposed us to land on Twitch, a new livestreaming platform unanimously considered the future. From a game to a success. Incredible.

Extraordinary. Very positive. The data of both ratings and contacts (interactions in primis) are considerable and, in this final phase of the Europeans, the increase – obviously – will be predictably exponential. I cannot hide the fact that we are enthusiastic because negotiations of great interest are emerging around this experiment. A youth channel that is gradually gaining more and more leadership at the expense of “classic” media, TV and more.

Great I’d say. Predictions for the next matches in the quarter-finals, semi-finals and final?

Daring, I usually never do them. Some favorites have skipped, see France and Germany. This has changed the scenario a bit and certainly the cards on the table. Obviously we are hopeful for the Italian national team which – I believe – an extremely competitive team. Roberto Mancini is also an excellent commander in chief, he knows how to do his job well. We will have high level guests (as has already happened with Alessia Marcuzzi, Forest, Collovati, Graziani), but the real news is the closure. We are concluding an agreement with a 2006 World Champion. But I can’t say who.

Projects for the future?

The hyenas will go on until December, as per contract. However, I do not hide from you that, in my opinion, there is a life beyond television. I believe in this new market of young and very young people who with smartphones will have communication just a click away. Like it or not, the social universe is the future. I conclude by saying that something big is boiling in the pot. It is premature to mention it because in these days we are probing a proposal of extraordinary importance.

I can only say that it is a different “world” from the television one, and that’s the beauty of it! If they are roses they will bloom and, I presume, even soon.

August 13 is the deadline for the salary agreement in Barcelona