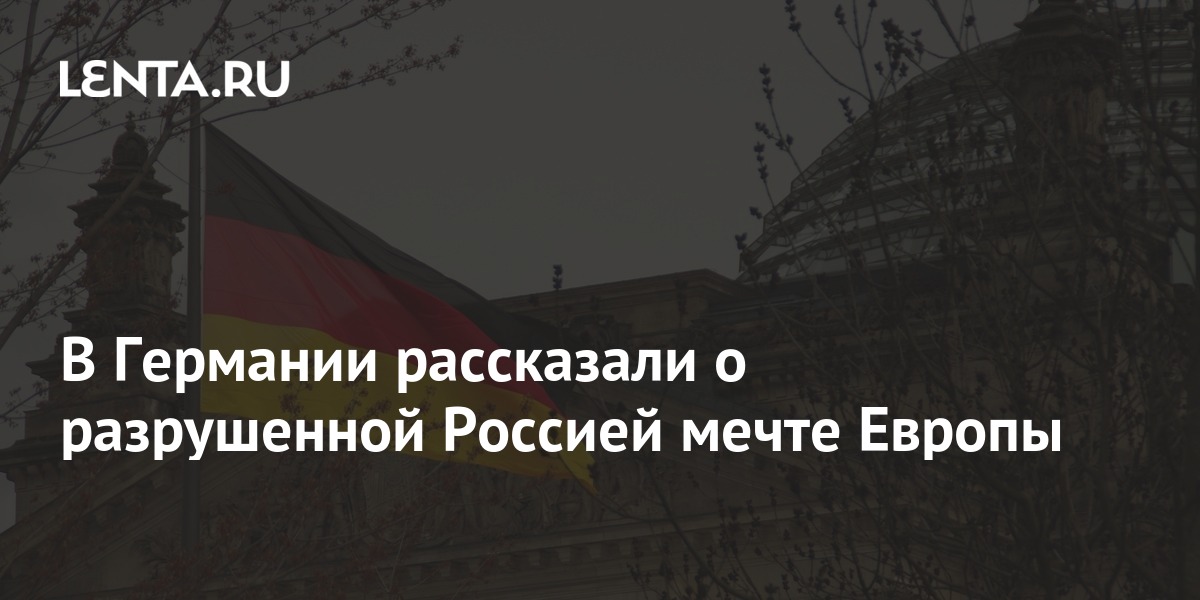 Reinhard Krumm, head of the Vienna office of the Friedrich Ebert Foundation, in an article published Frankfurter Allgemeine Zeitung talked about the European dream that Russia destroyed.

He stressed that the previous political ideas are now not true, therefore, to maintain security, the European Union will have to negotiate with Moscow.

The author noted that the EU and Germany have no alternative but to build relations “with the largest country on earth” – as partners, competitors or even as opponents. He outlined three key assumptions to consider given the current tensions and on which the previous policy was based: relations with Russia are stable, the state is in political and economic decline, and long-term security risks are low. All this is not true.

It is also doubtful whether and when the collapse of the Russian economy, which has often been predicted for years, will occur. This, in turn, casts doubt on the assumption that sanctions are an effective means of changing the Kremlin’s course. While the sanctions have increased pressure on the Russian economy, it is actually quite stable, accompanied by rising oil prices and strong macroeconomic policies.

Krumm noted that Russia is ready to challenge the West and take risks, including out of a sense of justice. He added that such a development of events is not in the interests of Germany and the European Union. As a first step, the author of the article outlined the formulation by Europe of its own security interests.

The dream that Russia, due to political and economic difficulties, will back down and turn its gaze back to the West will not come true. The internal development of Russia, as well as the development of its foreign policy, causing such an emotional rejection in the EU and the United States – this development amazed both the East and the West. It led us to paralysis of thinking, no one knows what to do next

First of all, the observer pointed to the negotiations on nuclear disarmament. As a tool, he proposed exclusively negotiations and recalled that the presidents of Russia and the United States, Vladimir Putin and Joe Biden, had a dialogue about this, while this did not happen in the EU.

In July, the Russian Embassy in the United States warned the American authorities about the possible consequences of the deployment of hypersonic missiles in Europe. The diplomatic mission warned that this decision could destabilize the current state of affairs and increase the likelihood of unintended conflict.

Krumm also noted that threats to European security have increased recently in connection with the situation in Ukraine. He stressed that only after solving this range of issues can we move on to those that the European Union defined in its latest declaration – health, climate, environment and the role of civil society.

The time has come for Germany and the EU to finally become active again in the foreign policy arena, and not just react to what is happening. The Kremlin’s passivity in seeking out solutions must be contrasted with a common policy based on interests and strength. It’s difficult? Yes. Impossible? Not

Earlier, Washington called on the leaders of the member states of the European Union to work together to combat Russia’s malicious actions. This statement was made at a meeting of the Eurogroup by US Treasury Secretary Janet Yellen. She stressed that the United States and Europe must jointly confront the challenges to the principles of openness, fair competition, transparency and accountability.