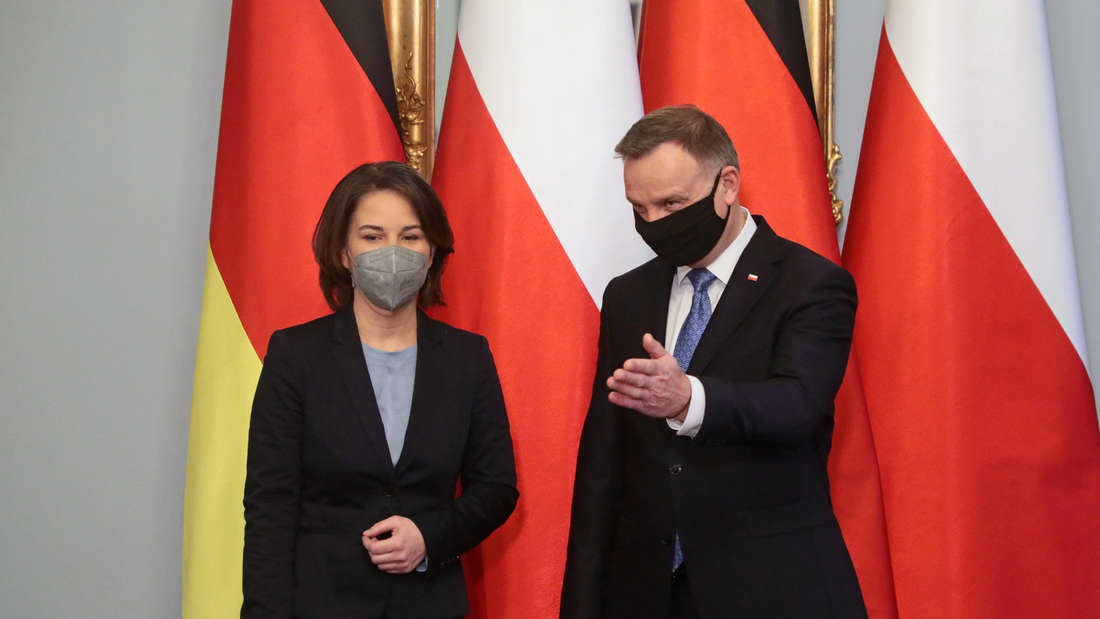 Once more critical tones from Poland: It’s about Scholz’ tank ring exchange. Baerbock has to defend the traffic light directly in a press conference.

Berlin – The traffic light coalition praised the so-called ring exchange for arms deliveries to Ukraine as the preferred solution. The idea: Other countries deliver suitable material to the war zone, Germany fills in the gaps in helpers. But there is a problem. Now criticism is coming from Poland, from the highest political level.

Because before the meeting between Foreign Minister Annalena Baerbock (Greens) and her Polish colleague Zbigniew Rau, the federal government had to listen to harsh statements. Poland’s President Andrzej Duda accused her of breaking a promise to deliver tanks to his country. In an interview with the TV channel Welt on the fringes of the World Economic Forum in Davos, the head of state of the NATO partner referred to a commitment from Berlin to deliver tanks to replace tanks handed over to Ukraine by Poland. “You have not fulfilled this promise,” added Duda, referring to the federal government. “And frankly, we’re very disappointed about it.”

And that’s not all: Poland also uses an argument frequently used against arms deliveries in Germany as a reproach. “We have provided Ukraine with a large number of tanks,” said the Polish President. “By doing so, we have weakened our own military potential and we have depleted our own military stocks.”

“So if we had been supported by Germany, if we had gotten a replacement in the form of a ring exchange, then we would have been very happy,” said Duda. “In fact, we received such a promise and Germany promised to supply us with these tanks.” In general, the federal government is doing too little to help Kyiv in the Ukraine war, said Duda. Also because of the lack of German commitment, Poland stepped in with tank deliveries.

Ukraine news from Germany: Baerbock is trying to calm the waves after Poland’s criticism of weapons

So Baerbock had to try to smooth things over quickly. After a meeting on Tuesday (May 24) in Berlin, the Greens politician said she had spoken to Rau about how existing “ambiguities” could be cleared up together.

It is therefore important to be in constant communication with each other so that no misunderstandings arise.

Germany cannot deliver heavy military equipment to Ukraine “at the push of a button or with a snap of the fingers”, especially not from German stocks, Baerbock asked for understanding. The material must be “available, repaired or reordered accordingly”. The minister wanted to make it clear: “It is therefore important that we are in constant contact with each other so that no misunderstandings arise.”

Rau initially responded cautiously from Poland, saying he had “taken note of the German statement”. Baerbock gave him “a number of reasons” why the required ring exchange had not yet taken place. In Berlin, however, there is apparently a will to “solve the problem”.

You can read more about the military events in the Ukraine war in our news ticker.

A situation that the opposition naturally does not let slip. It didn’t take long for the Union’s leaders to position themselves. “Obviously, the German government made promises to exchange rings with the Polish government, which are not being kept,” said CDU leader Friedrich Merz on Tuesday evening on TV station Welt. “The federal government must now quickly clarify why it is not fulfilling the commitments it has made.”

The CDU defense expert Roderich Kiesewetter called for clarity about the agreements within NATO on arms deliveries to Ukraine. So far, he only knows that within NATO, the arms deliveries should be deliberately national decisions, he said daily mirror. (dpa/cibo/AFP)

In Serie A they have not liked Mbappé's contract either, they classify it as "absolute evil"