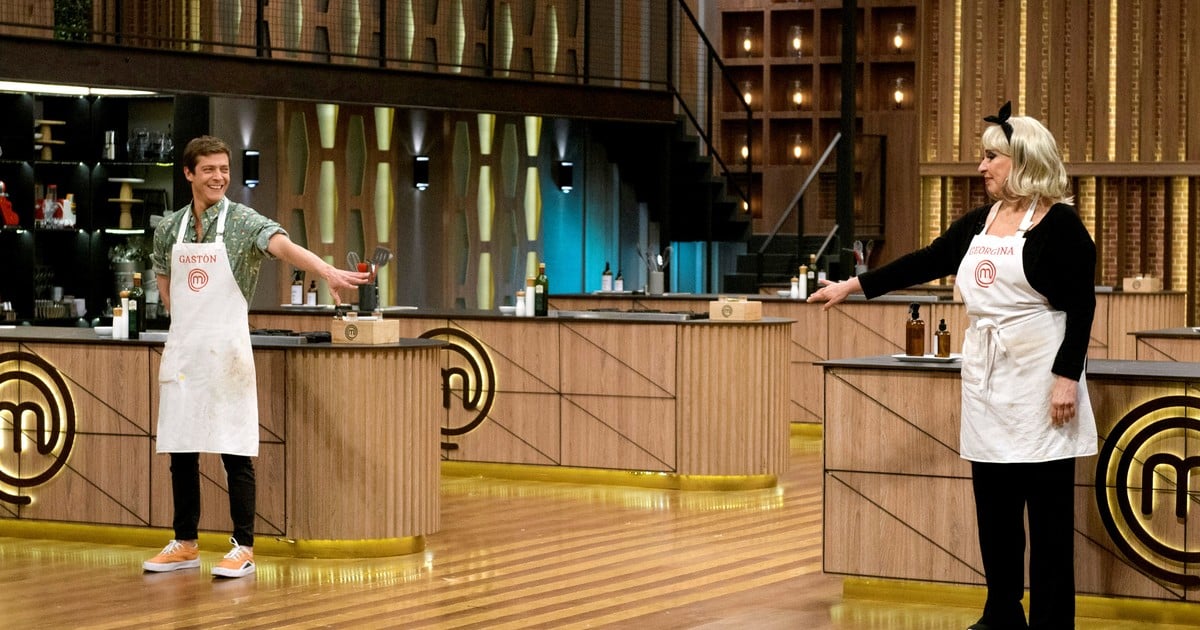 According to Telefe, two endings were recorded: in a win Georgina Barbarossa; in the other it is imposed Gaston Dalmau. The two actors turned into cooks assure that the channel keeps the secret under seven keys: just this Thursday they will find out, at the same time as the public, who of them won MasterChef Celebrity 2.

The second edition of the gastronomic reality show that became the pandemic television phenomenon – with rating numbers from another era – comes to an end. After the elimination of Sol Pérez on Tuesday, it is intuited that this Wednesday the battle will take place in the kitchens.

And on Thursday at 22, in a kind of special of half an hour before the debut of The Argentine Voice, only the winner will be announced.

“I’m beating the final because I don’t know if I won or not. For me, it’s waiting for the day the program airs and seeing if I raise my glass and celebrate at home. It’s weird, “Dalmau tells Clarion.

Between Dalmau and Barbarossa is the winner of MasterChef Celebrity, second edition.

Barbarossa, who won the affection of the public with her wigs and tributes to popular figures, assures that she lives these days with great emotion. “I already won. I never dreamed of reaching this stage. Having come this far is warriors“, adds Georgina from the route.

Hours before the last challenge and knowing who will take the one million two hundred thousand pesos, the actor who has lived in Los Angeles for years and the host and actress who continues to reinvent herself, they review their passage through reality.

-How would you summarize your time at “MasterChef”?

-Dalmau: Intense. I have not been on Argentine television since 2012. So it was to return to the public eye in a field that is not mine. What I didn’t want to go first. And as I stayed I began to study: I would come home and look at recipes, new techniques, to understand what a dish is. And the last month was more intense, I didn’t see friends, I was locked up cooking. But it was very nice, an incredible experience.

-Barbarossa: Me too. An obsession with making recipes and waking up … even today I wake up and think I have to cook. The same thing happened to all of us. What’s more, I got cooking teachers who helped me; I got into Youtube to see recipes, on Instagram and Pinterest to see dish presentations. I became sick.

Gastón Dalmau feels that reality allowed him to show himself in his “intense” version.

-Who did you see as the winner when you started?

-Dalmau: I had a lot of faith in Cande (Vetrano). I saw her in the final. I think for some time I saw her María O’Donnell, very neat and always stable, neither too high nor too low.

-Barbarossa: I imagined that La Gunda (the actress Claudia Fontan), who is the best cook. And as time went by, I realized that María, Sol, Gastón and Cande were the candidates. They were the most obsessive.

-What was the most difficult dish to prepare?

-What was the dish that made you most proud?

-Dalmau: Mmm … I think the semolina gnocchi that I made in honor of my mother. It was a dish with a lot of love, and I had her recipe. It was one of my first good returns.

-Barbarossa: The salmorejo, with that I won a medal. Because it has to do with my DNA, my story. It is similar to gazpacho, those dishes that were made in wars, using what was available. From that I learned that less is more, as I always tell my theater students.

For her companions, Georgina was “the aunt” of the group.

-What habits or culinary knowledge did you incorporate from “MasterChef”?

-Dalmau: I put on quite a ball breaker with the condiments. I was to put salt and pepper. I started adding coriander, parsley, fennel, watercress … things that add flavor and add, of course. And to understand that a dish has to have a bit of acidity and sweetness; different temperatures and textures. I think that the palate sharpened a little. I always liked going out to eat and trying new things. And the show exacerbated that.

-Barbarossa: Me I gained eight kilos, because I started doing delicious things: homemade pasta that Donato (De Santis) taught us; Cake doughs that (Damián) Betular showed us. In addition, now I encourage myself to mix flavors that never occurred to me in my life, such as adding orange or lemon peel to salty things. Everything sweet and sour with honey and ginger. It was like making a loon, but from the kitchen.

-Which jury did you get along better, from which did you learn the most and who of the three was the most demanding?

-Dalmau: The ones I got along best with was Donato and Betular. The one who demanded the most of me was (Germán) Martitegui. And it was also the one that taught me the most: with him I learned to overcome frustration in the kitchen.

-Barbarossa: Martitegui is the most demanding. He looks bad, but he has great tenderness. I have learned from all three. I love them, I miss them, I feel like when an addict is in abstinence. Y Santiago (Del Moro) is like a kind of therapist.

Neither Dalmau nor Georgina know who won, but the two celebrate this heads up. although his initial candidates were others.

-How did you experience the Fontán episode, when you picked up food from the floor? Did they agree with the jury’s decision?

-Barbarossa: I think La Gunda did not notice, whoever is free from sin, cast the first stone. It was like a girl’s snot. In due course, she apologized and took over. It was already known that after that it was difficult for La Gunda to win. But for her it was terrible, because cooking is her life.

-Dalmau: I was one of those who saw her on the floor. Y I saw that she was alienated, out of her mind, it wasn’t her. The problem, and what caused anger, was the subsequent lie. It was an attitude of a boy because denied it and denied it and there were cameras. If I had said: ‘I sent it to me, don’t eat it.’.. I don’t know, you have to be in her place. It was an ugly situation for everyone. The program was good for it. We will not be hypocrites either. It is a reality show.

-What does it mean to face each other in the final?

-Barbarossa: It’s like I adopted them all. I was the mother hen, did you see that they called me “the aunt”? Who would have thought of this final with my Gastoncito. I am glad I arrived with him, because he broke his soul. Of course I would love to win, but if he wins everything is fine. I never felt the age difference with the boys, because I was just another girl playing.

“I never felt the age difference with the boys, because I was just another kid playing,” says Barbarossa.

-Dalmau: “Auntie” broke it in every way: in the kitchen and with that character and his set of wigs. Besides, her love. It is a mine that I really want, everyone wants it. Always happy, and we all know that he has not had such a simple life, many things have happened to him. She thought that we would go to record ten hours every day, and then she would go to the theater. I admire her deeply. It is a pleasure and an honor to have arrived with her.

-Do you think that the perception that people had of you changed after the program?

-Dalmau: Let’s see … Yes, in the sense that people were left with the image of the Teen angel. Here I was seen as I am, let’s say. The day I made sushi, I completely forgot that there were cameras. And it’s good for people to see that you get angry, laugh, whore, cry. I am like this in my life: intense. I live everything to the surface. I also feel a lot of affection and love from people. And not only of the adolescent public of that time, but they send me videos of little ones cooking; or grandmothers who see you as a grandchild. I love that. It’s like reaching people’s hearts.

-Barbarossa: I do not know. But people discover me who didn’t know me before. I think people saw me just the way I am, happy Georgina. Many things have happened to me in life, but the murder of my husband changed me 180 degrees. That joy had lost it, and had regained it a long time ago, but could not show it on screen. Now I recovered an audience of children that fills my soul. Because you don’t cheat on boys, you can’t lie to them. That strikes me as moving.

Two actors reinventing themselves: MasterChef “was the labor raft in a pandemic. Without fiction and with glory.

-Do you think that “MasterChef” is going to change the profile of your careers?

-Dalmau: I do not know. It does open doors for me to encourage myself to do other things. Not to pigeonhole myself into just fiction. As I look more versatile. It’s good not to pigeonhole you. I’ve been through everything. In the United States I worked both in front of and behind the camera: I worked four years in visual effects for Marvel. People a lot do not know. I still live there, I have my house in Los Angeles. I will be coming and going this time, depending on what opportunities appear. I’m missing a little bit.

-Barbarossa: I continue to teach theater classes for Instagram and by Zoom. Federal and international classes for all ages, from 12-year-old boys to 90-year-old ladies. And when the pandemic is released, the idea is to continue with the theater and with a lot of projects that have emerged.