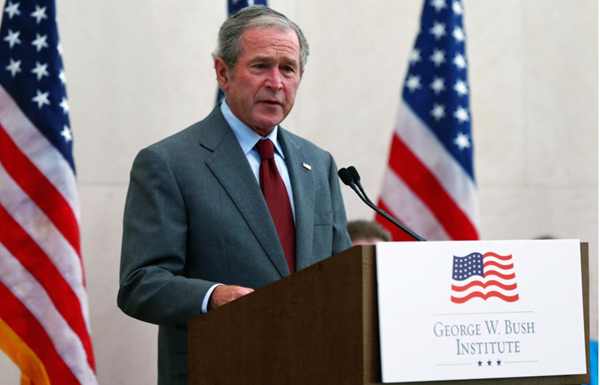 Former US President George W. Bush joined the sharp debate about immigration by asserting in an article published in the “Washington Post” that “new Americans” play a “positive role”, calling for a progressive system to settle the status of illegal immigrants.
The former governor of Texas, a border state that borders Mexico largely affected by immigration, published this column before releasing on April 20 his new book, which collects pictures of self-made portraits of immigrants.
George Bush’s book is entitled “One of the Many: Portraits of America’s Immigrants” (Out of Mini-One: Portraits of America Emigrants).
George W. Bush, 74, wrote with humor that he knows that his paintings “may not shake the art world,” but he hopes, by spreading the “distinct” stories of immigrants, to “humanize the debate about immigration and reforming” the system.

From Captain Florent Grobier, a soldier of French origin, who received the highest American military honor for his services in Afghanistan, to the two important figures in American politics, Madeleine Albright and Henry Kissinger, his photos reflect the immense diversity of immigrants’ career paths.
“The positive role of the new Americans continues today with their energy, idealism and love for the country that they always feel,” Bush wrote.
The release of Bush’s book comes as the administration of President Joe Biden, who has promised to pursue a “more humane” immigration policy, faces the biggest increase in 15 years in the number of immigrants arriving at the country’s southern border.

Bush does not offer a specific proposal, but he listed a number of points related to the path to citizenship for those who arrived in the United States in childhood and are called “dreamers,” and to strengthen procedures on the borders with Mexico and put in place a “modern system” to receive asylum seekers, and increase legal immigration to allow Talented people to bring their ideas and hopes “to the United States.
As for the millions of illegal immigrants currently living in the United States, Bush said that he believed a general amnesty would be “absolutely unfair” to those trying to reach legally. However, he believed that “a gradual process must be started to grant residency permits and then citizenship to those who deserve them.”
In doing so, applicants will have to pay fines and arrears of their taxes, provide evidence of their years of work in the United States, good knowledge of English and American history, and no criminal record.

"We do not consider more contributions to the pension money box"