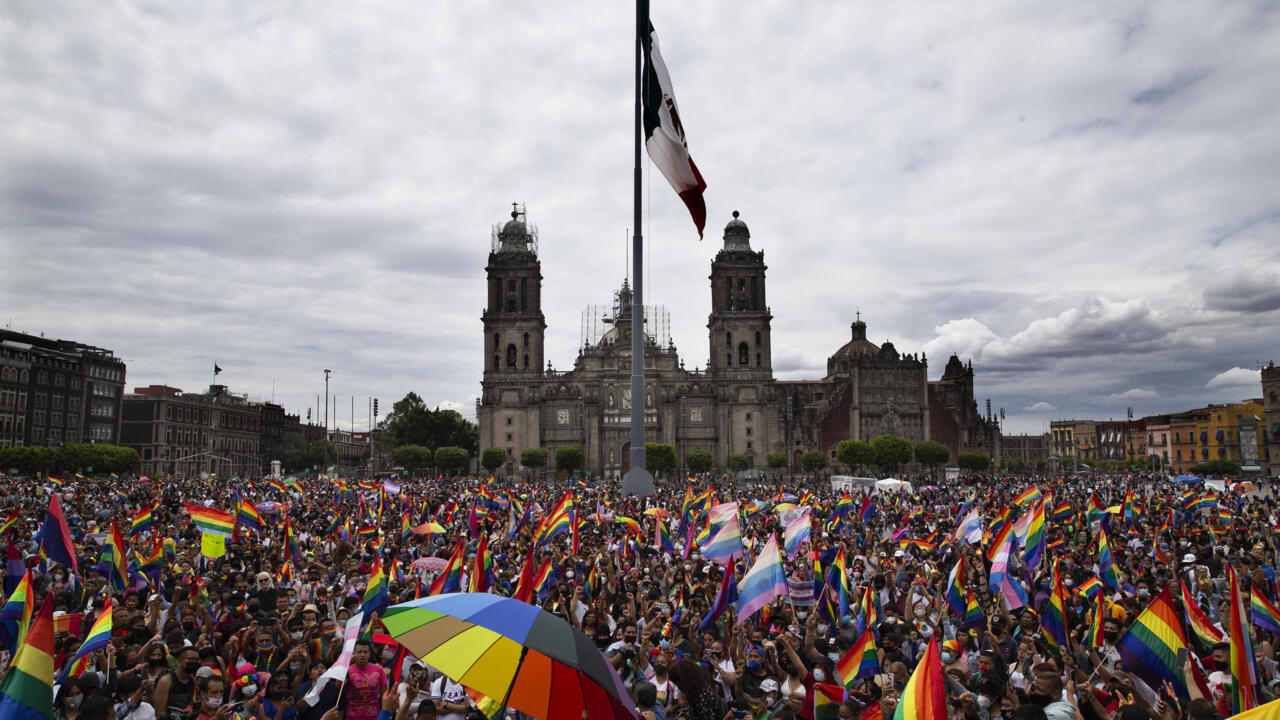 The rebound in Covid-19 cases in the Latin American region did not prevent people belonging to the LGTBIQ community from taking to the streets and raising their voices for their rights that are still strongly violated in the region. After a year of pandemic, many of the advances in the matter regressed considerably.

Despite the serious health situation in Latin America, several of its main cities were dyed in the colors of the rainbow to commemorate Gay Pride day.

Many of the Latin American governments urged people to stay at home and commemorate virtually. However, multiple LGTBIQ groups invited citizens to claim their rights in the streets, which are still violated in much of Latin America.

This was the case in Mexico, where thousands of people joined the XLIII edition of the Lesbian, Gay, Bisexual and Transsexual (LGBT) Pride march on June 26. In the country, there is already a recognition of marriage between same-sex couples in more than 20 of the 32 states. However, the murders and abuses towards the people of the LGTBIQ Community continue to be present.

“We did not want to ‘sell’ the movement because it belongs to everyone and we are all the march. Some made it virtual to have sponsorships, but we simply took to the streets, like every year,” Scarlett Giselle Reyes, of the National Agenda collective, told EFE. Trans Policy.

However, not only Mexico joined the commemoration, they also did so in countries such as El Salvador, Panama, Colombia and Ecuador.

The mobilizations amid a rebound in Covid-19 cases show that there is still a long way to go to ensure the rights of the community in Latin American countries where, according to the report State homophobia 2020, nine of them still consider it illegal to have sex with people of the same sex.

The classification by some nations of sexual relations between persons of the same sex as “sodomy”, “gross indecency” or “act against nature”, is just one more example of violence that gay, lesbian, bisexual, transsexuals, queers, intersex and other groups with diverse sexual orientations and gender identities in the region.

According to a statement from Amnesty International entitled “When being yourself pays off with life”: “Threats to the lives of LGTBIQ people are especially worrying in Mesoamerica.”

The violence in the countries of the northern triangleGuatemala, El Salvador and Honduras), where there is an inability of governments to protect their integrity and their lives.

In Honduras, as reported by the Lesbian Network Cattrachas, between 2009 and 2017 there were

264 murders of LGBTIQ people. While in El Salvador, the NGO COMCAVIS-TRANS reported 28 serious attacks against people belonging to the community in a period between January and September 2017.

In fact, according to the report “Prejudice knows no borders”, by the organization LGBIQ SympathyHonduras is the country with the most violent deaths of LGTBIQ people in the region, followed by Colombia and El Salvador.

The figures for Latin American countries are not very encouraging in terms of homicides. Between January 2014 and June 2019, 1,292 LGTBIQ people were murdered only in the nine countries with the most homicidal violence towards people in the community.

What about legalizing same-sex marriage?

In 2020, Costa Rica became the most recent country in the region to legalize same-sex marriage.

With these advances, in South America same-sex marriage is legal in Argentina, Brazil, Colombia, Ecuador and Uruguay. It should be remembered that in Chile and Bolivia civil or “de facto” unions are accepted throughout the nation.

In Central America, the data is even less favorable. There, only Mexico, Costa Rica and Puerto Rico have taken the step.

The situation of the Trans community

Several of the Latin American countries occupy the first positions of that list. In Brazil, more than 1,500 trans people were murdered in that period, 528 in Mexico, 180 in Colombia, 126 in Venezuela and 107 in Honduras.

Transphobia remains a serious problem in almost all countries. For example, only in 2020 in Mexico there were 43 transfeminicides and in Argentina in 2018 it was reported that 43 trans women died due to absence or abandonment of the state.

The setbacks the pandemic led to

After more than a year of pandemic, multiple organizations protecting DD. H H. show the decline in various issues related to the LGTBIQ community in Latin America.

The document published by Human Rights Watch, “I live every day in fear” shows the worsening of acts of violence and discrimination against people from the LGTBIQ community in El Salvador, Guatemala and Honduras.

According to the report, “LGBT people were fleeing contexts with high levels of generalized violence. However, many were also fleeing persecution based on sexual orientation or gender identity ”.

As the southern border of the United States was closed for the pretext of the pandemic, these people had to remain in Mexico or return to their countries of origin.

On the other hand, the IACHR highlighted Peru’s Supreme Decree 057-2020-PCM, which was taken as a measure to contain the pandemic, but which led to an increase in discrimination against trans people by establishing the “circulation of women and males ”on specific days.

As the Commission showed, this resulted in “physical and verbal abuse by law enforcement officers; they were even forced to repeat phrases that deny their self-perceived gender identity ”.

Finally, in Colombia, the Caribbean Affirmative organization found that “the pandemic has been a pretext for the denial of rights and evidence of historical inequalities and systematic exclusions suffered by LGBT people. “

2020 will go down in history in the world, due to the social, economic and political consequences generated by the COVID-19 pandemic.#AfirmativeCaribbean with the support of @NorwayenCOL will present: Confined lives, Human Rights Report of LGBT people in the Colombian Caribbean, 2020. pic.twitter.com/6kZMd2b2z1


The organization showed that the sanitary measures led the people of the community to live in their homes with people who discriminate and violate them. Thus, the pandemic constitutes one more challenge that Latin American nations have to face to ensure the protection of the rights of the LGTBIQ community that asks for them in the streets.