Gave Tsitsipas: how the tournament in Monaco became a record for Rublev 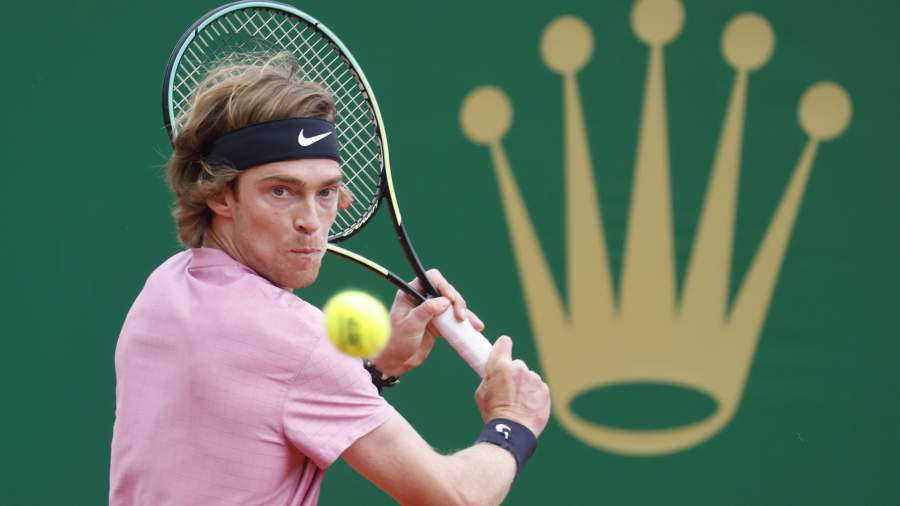 Russian tennis player Andrei Rublev failed to win his debut Masters final in Monte Carlo. In two sets, he lost to Stefanos Tsitsipas (3: 6, 3: 6), who reached the final spending much less energy. In the first four matches, the Greek faced only one seeded player (Christian Garin) and did not lose a single set. Rublev beat the third racket of the world, the great Rafael Nadal and the powerful Spaniard Roberto Bautista Agut, in exhausting fights. Thanks to reaching the final, Andrey will update his rating record, moving up from eighth to seventh in the ATP ranking.

Victory over the king

“Andrei simply did not have time to recover by the final,” President of the Russian Tennis Federation Shamil Tarpishchev told Izvestia. – His calendar for the final part was much more difficult and the volume of workload was completely different. Tsitsipas looked fresher today and served better. Almost always the first ball. These two factors influenced the result of the match. However, in any case, our tennis player can bring this Masters into his asset. He played great on clay.

Russian tennis leaders Daniil Medvedev and Andrei Rublev started the Masters in Monte Carlo from the second round. However, Medvedev tested positive for coronavirus and was forced to withdraw from the tournament (he was replaced by the “lucky loser” Juan Ignacio Lawndero from Argentina). Rublev, who feared for his health (he was in contact with Medvedev in April), the infection was over. Therefore, Andrei went to the match with Salvatore Caruso and easily beat the experienced Italian.

In the 1/8 finals, the Russian faced serious problems. He was opposed by the powerful Spaniard Roberto Bautista Agut, who had already beaten Rublev this season at the tournament in Qatar. Then Bautista confidently won the match in two sets (6: 3, 6: 3), and this time a real struggle ensued. The fight lasted 2 hours and 45 minutes. In the first set, everything was decided in a tie-break in favor of the Spaniard. Rublev won the second game in a bitter struggle (7: 5), and in the third he turned out to be a fresh opponent (6: 3), having equalized the score in personal meetings (3: 3). The lion’s share of the points in this match was played out on long rallies, so the success of Rublev in the fight against the genius of tactical struggle caused extremely positive emotions among the fans. Thanks to this, the second racket of Russia for the first time reached the quarterfinals of the clay “Masters”.

Before the next game against Rafael Nadal Rublev said that he had already completed the minimum task, so he would play against the “king of the ground” without pressure. Still, Nadal won the Monte Carlo tournament 11 times, and lost here only four players. Rublev became the fifth tennis player to beat Rafa in the principality. True, this was done with a rather mediocre game of the famous Spaniard. Nadal made 36 unforced mistakes. But this would not have happened if it were not for the overdiscipline of Andrei, who patiently waited for a chance in long rallies and reduced the number of mistakes to a minimum. Plus, the Russian showed an excellent reception of the opponent’s serve, and when he lost the second set (4: 6), he was not embarrassed, but continued to bend his line in the decisive game (6: 2).

For reaching the final, Andrei played with the Norwegian Kasper Ruud and this meeting turned out to be not easy.

– He started with a break, and I realized that I needed to raise my level, accelerate and hit harder. Otherwise, I wouldn’t have had a chance. I did so and then started playing better, and he began to make more mistakes. I think this has become a key factor, – Rublev explained to reporters.

Thus, the native of Moscow reached the largest final of his career, where the Greek Stefanos Tsitsipas was waiting for him. The sixth racket of the world playfully passed all his opponents in Monte Carlo and had much more strength than Rublev.

Indeed, on the way to the final, no one could create any problems for Tsitsipas. Stefanos easily defeated Aslan Karatsev, Christian Garin, Alejandro Davidovich-Fokina (the Spaniard generally starred after the first game) and Daniel Evans. For example, in the semifinals, the Greek lost only three games to the British. So Tsitsipas went to the decisive match not only confident in his abilities, but also rested.

Rublev, as expected, looked haggard. The Russian lost the first game on his serve, and after a little over ten minutes after the start of the game he was already losing with a score of 0: 3. Moreover, in the break game Rublev lost points three times in a row, without having given the first ball before. His usual sweeping play with powerful forehands appeared only in glimpses. As a result, he lost in all respects. Alas, at the beginning of the second game the opponent of our tennis player made a break again.

Rublev had chances to level the game, but could not use them in any way. For example, in the sixth game, when the opponent was serving at 30:30, he made two mistakes in not the most difficult situations. As a result, Andrey was unable to earn a single break point during the match, let alone realize it. The logical victory of Tsitsipas, which allowed him to lead the ATP championship race.

“Rublev played excellently against Nadal in the quarterfinals, proving that he is an extra-class player,” Andrei Chesnokov, winner of two Masters series tournaments, said in an interview with Izvestia. – Who would have thought that Andrey could beat Rafa on clay? This is truly a super achievement. Losing the finals is not terrible. Tsitsipas is now in good shape, and tactically he was at his best today. Firstly, he played very cleverly at the reception, and secondly, he deliberately made long rallies. Realizing that the opponent has much less strength.

In the future, both Rublev and Tsitsipas can become the leaders of world tennis, the source of Izvestia is sure.

– Tsitsipas and Rublev are incredibly stable players, very physically gifted, who are constantly improving, the expert continued. – In my opinion, it is one of them who will win the Grand Slam tournament from the younger generation. It is quite possible that this year.

As a result of the tournament, Andrei Rublev climbed to seventh place in the ATP ranking, updating his record.