Full presence returns to secondary school: how it will be implemented and what they say in schools 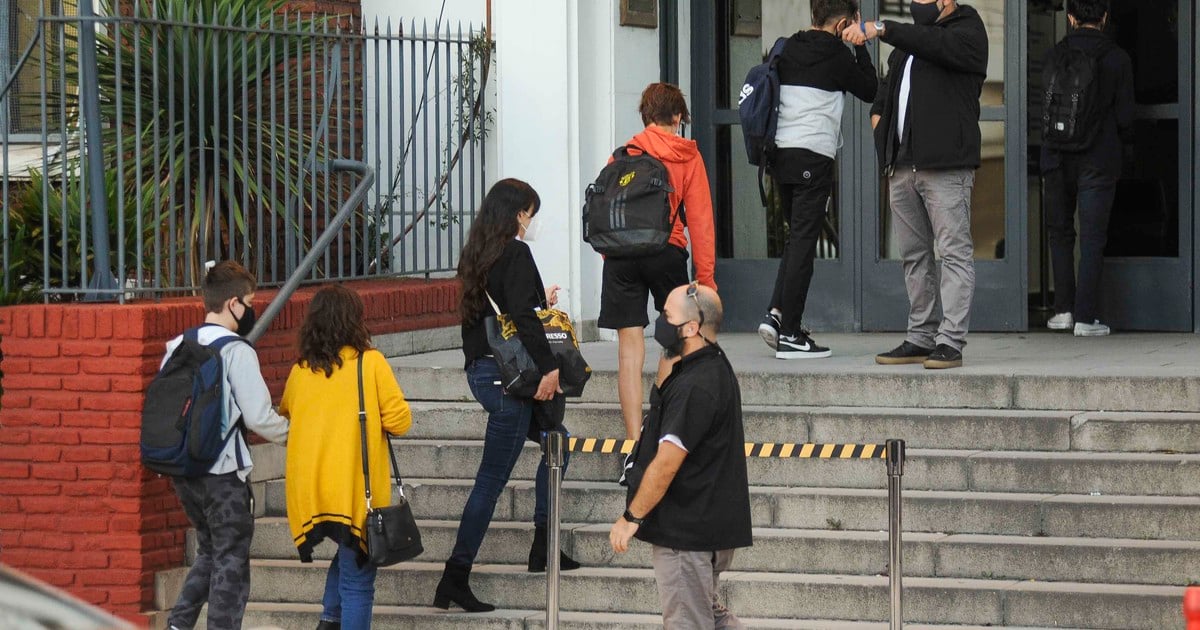 Students from secondary schools in the City of Buenos Aires they will regain presence two weeks before winter break. Will be from Monday, July 5. And in these days ahead, schools will have to reorganize infrastructure and schedules; just like families, who will return to a certain normality with boys and girls again in the classrooms.

But no matter how much they are enabled, not all secondary schools will be able to implement full presence. It will depend on the conditions of each one. Fundamentally, the square meters of their classrooms and ventilation.

On Thursday, the head of the Buenos Aires government, Horacio Rodríguez Larreta, announced easing of the restrictions. On the one hand, the presence of the entire secondary level is turned around. And on the other, the 30% capacity is allowed inside bars and restaurants, party rooms (only for gastronomy service) and in gyms. Meanwhile, theaters can occupy up to 50% of their capacity, among other opening measures.

Both at the level of education, as in the rest of commercial and cultural activities, these measures take place in an epidemiological framework of contagions “stabilized and down”, as described by the Buenos Aires authorities.

“The average number of new cases per day decreased in the last 4 weeks from 2,700 to 1,200. And the contagion rate (R) remains below one, at 0.90. The decrease begins to impact on the lower occupation of intensive care beds, “they explained from the Ministry of Health.

The return to full face-to-face classes for high school will be from Monday, July 5. Photo Federico Lopez Claro

With these numbers in favor, this new scenario was raised where now yes all levels of education (maternal, initial, primary and secondary) they return to the presence. While adult education and teacher, higher technical and professional training, you will be able to carry out face-to-face practices.

According to the Buenos Aires Ministry of Education, this the circulation of people will increase by 16%. “The current scenario shows us 596,218 people moving exclusively for school subjects. Now there will be 692,260”, they evaluated.

The Winter Break are maintained: they will be between July 19 and 30. In Education they understand that these two weeks before the break “will be essential for boys and girls to reinforce their learning prior to the end of the semester,” they explained.

The director of the secondary school of a traditional Recoleta school, with more than 100 years of history, tells Clarion on the total return to face-to-face: “For us it was great news because this stage is very demanding, in view of the upcoming evaluations. And we need the students to be in the classrooms to reinforce everything we have been seeing. These ages the boys are very autonomous, and we have not had major difficulties with the content, but without a doubt they need to be in their place of belonging, which is school“.

This school in particular will be able to receive all students, every day. It has small groups in number of students (an average of 16 per division) and spacious and well-ventilated classrooms.

“These conditions have facilitated face-to-face teaching, also in primary school. On the other hand, it has been decades that secondary and primary students have not crossed paths in the corridors, or during recesses, not in the dining room and at the exits. we trust that we can organize ourselves“, they explain.

Of course, not all schools are in the same condition. Which implies that each community will have to adapt the schedules and the bubbles in order to guarantee the largest number of face-to-face classes.

Since the pandemic classes began, each school had to adapt to ensure distance and good ventilation. Photo Germán García Adrasti

“Fourth and fifth are the years when they spend the most time together, due to the autonomy they have: they study, go out, have fun, sleepovers. I have a daughter in 5th year and I never thought I could see her so happy to go back to school“, says Sandra and lets out a laugh.

“They had started this year thinking that they could leave all this behind – he continues -. They were almost organizing the trip for graduates and suddenly the confinement came. They live this return with joy. Honestly, we also because we need them to resume their face-to-face life at school“Said Sandra, also the mother of two other children, both in elementary school.

During the first week of June, after a strict 9-day confinement due to the rise in coronavirus infections, the 55,000 students in grades 3, 4, 5 and 6 went to full virtual mode. And on June 14 it was decided to expand towards a bimodality.

Rodolfo de Vincenzi, vice president of the Confederation of Associations of Private Education Institutes and rector of the UAI, assures that schools are prepared to retake presence.

“In March the full school year began, afterwards modifications had to be implemented. Always focusing on the protocols, the establishments were adapting the classes based on an equation that affects the infrastructure. Because let us remember that the number of students in bubbles have to do with the square meters available in the classrooms and the ventilation“, points out De Vincenzi.

The truth is each school had to adapt the teaching modality depending on what the protocol and building conditions indicate.

“There are isolated teachers who end up teaching classes from home and with students taking them from the classroom. Or an isolated student accessing the classes via streaming from home. The protocols pose general situations, but reality forced schools to adapt and many things had to be resolved at the time, “says De Vicenzi.

And he thinks: “I understand that perhaps many schools cannot return 100% to face-to-face, because especially in secondary school there has been a good adaptation to bimodality or virtuality. But I believe that presence guarantees the universality of knowledge. And, especially in secondary school, school trains you for civic and social life. And at this point also presence is key“.

According to the Ministry of Education of the City, since February there were 15,856 confirmed cases of coronavirus among the more than 700 thousand people involved in the school universe (teachers, non-teachers and students). At this time 0.14% of the total educational population is under protocol, which has generated the isolation of 502 bubbles (1.11%).

Regarding testing and vaccination, and according to official information, 100% of registered teaching and non-teaching staff were vaccinated. And 153,646 tests were carried out. Of the tests, 5,765 antigen positives and 1,658 were positive in the PCR evaluation.