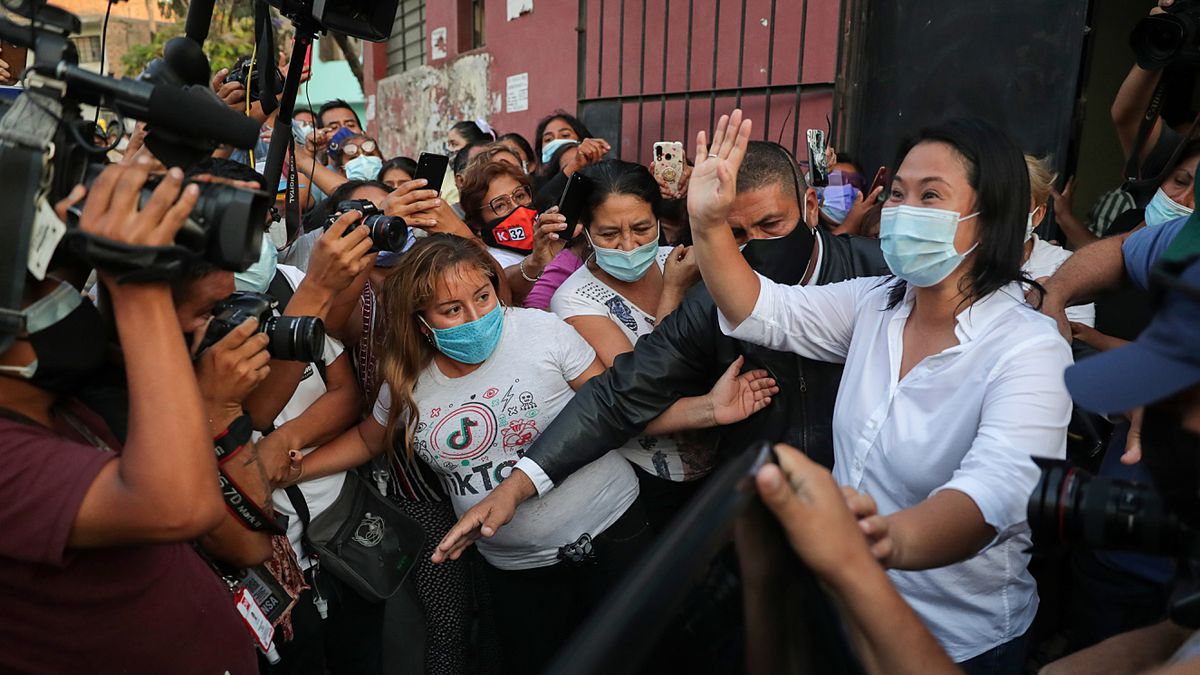 The far-left professor Pedro Castillo and the conservative Keiko Fujimori have gone on to vote for the presidential elections in Peru, in an election marked by the most critical moment of the second wave of covid-19. Castillo has quickly resumed proselytizing trips in her region, Cajamarca, one of the poorest in the country, while the candidate accused of money laundering – and with 55% social rejection – awaits the permission of a judge to campaign outside of Lima . Both face obstacles for the next six weeks, until June 6, the day of the second round elections.

“Fujimori has a specific limitation, which is the impossibility of leaving Lima due to a court order,” says anthropologist Javier Torres about the probation under which the leader of the Fuerza Popular party is found. The Prosecutor’s Office accused the candidate in March of money laundering, criminal organization and obstruction of justice for having received millionaire contributions that she did not declare to the electoral authority in her 2011 and 2016 campaigns. According to tax investigations, the money would come from the Brazilian construction company Odebrecht and the owner of the main Peruvian financial group. The daughter of the autocrat Alberto Fujimori, the former president imprisoned for corruption and crimes against humanity, has received early support from the 2010 Nobel Prize in Literature, Mario Vargas Llosa, who considers her “the lesser evil.” Vargas Llosa believes that with Castillo “there will no longer be clean elections in Peru.”

The former presidential candidate of the Catholic far right, Rafael López Aliaga, has also given his public support to Fujimori. “I’m going to vote for Keiko: it’s hard for me, but I don’t want something worse than Venezuela,” he said Sunday. His political group, Popular Renovation, represents Opus Dei and the anti-abortion movement With my children, don’t get involved, which also opposes gender equality in education. The most voted congressman of Renovación Popular is a retired military man and longtime defender of members of the Armed Forces who committed human rights violations in the fight against subversion in the Andean country. Jorge Montoya points out that they will vote for Fujimori because he defends “the right to life, the social market economy and freedom of the press.”

The results of the valid votes of the first round, discounting the null and white votes, gave 19% in favor of Castillo and 13% in favor of Fujimori. An Ipsos Peru poll released on Sunday indicated that, one week before the elections, the union leader has 42% of the votes, against 31% of his rival. 55% of those surveyed say they will not vote for Keiko, against 31% who reject Castillo.

With a focus on education

The rural teacher at each rally reiterates his motto: “No more poor in a rich country.” He holds up a pencil-shaped cloth figure and points out that because he knows poverty closely, from his years as a teacher and a farmer, he knows how to solve the problem. Over the weekend, after spending five days in his community in Cajamarca, Puña, Castillo resumed the rallies and visited four towns in his region. “Our main tool will be the education of our people,” he said in the Plaza de Jaén on Sunday, before returning to Lima. The government plan of his party, Peru Libre, proposes that the investment of GDP in education goes from the current 3% to 10%.

“One of Castillo’s main problems is his lack of concrete plans to face the pandemic and the recession. This is going to be used by Fujimori and its allied media to question him as an improvised candidate ”, points out the anthropologist Torres. While Fujimori awaits the judge’s permission to travel, Castillo has already scheduled his tours: from Thursday he will be in the north of the country and the first days of May he will move to the northern Amazon.

The leader investigated for money laundering has recognized in an interview with the newspaper Trade that his father has recommended that he campaign remembering the social programs of his Government, which were the basis of his clientelist policy in the 1990s. However, Fujimorism also faces criticism, since these days the accusation against the autocrat and his former health ministers continues for the deaths and serious injuries to thousands of women who were sterilized without their consent, as part of the policy of “family planning ”Of his second Government.

Historian José Carlos Agüero considers that “the main weakness for Castillo’s campaign is his own identity. Formed under the idea of ​​a saving party, which is going to rescue the country from the terminal crisis from a brutal sincereness of what it considers its unjust class structure, it offers itself as an alternative of all or nothing. An absolute and blind bet on a self-described avant-garde as popular ”, he explains. “This has generated in the first round an adhesion by identity, by harmony of experiences with some popular and progressive sectors, which differentiated it from the frivolity of the other electoral options,” adds Aguero.

The historian believes that by representing Castillo “a survival response, he will grant positive properties to his rival, the undemocratic and corrupt Fujimori, which may assume the role of defender of democracy, the economic model and even the homeland itself.”

Former moderate leftist presidential candidate Verónika Mendoza, who last week said that “with Keiko Fujimori, not around the corner,” told EL PAÍS this Tuesday that on the part of her group, Together for Peru, there is a total predisposition to dialogue with Castillo. “Whatever the result of this, we will be very active as always in difficult times for the country, to stop the authoritarian and mafia threat posed by Fujimori,” he said. .

The former left-wing candidate has not planned to ask Castillo for “guarantees” to endorse votes. “Citizens and democratic forces must ensure that the changes that the country needs are made. With such a precarious institutional framework and such weak legitimacy of political actors, citizen mobilization is going to be key in the coming years, ”says Mendoza.

The National Society of Industries, the union of medium-sized businessmen, reported last week that it agreed to meet with the representatives of Peru Libre, from Castillo, an atypical reaction given that the business community has usually supported Fujimori, especially the employers of the great company, Confiep.

'Marilyn Manson' accuses production of I am: "They rejected my proposals"