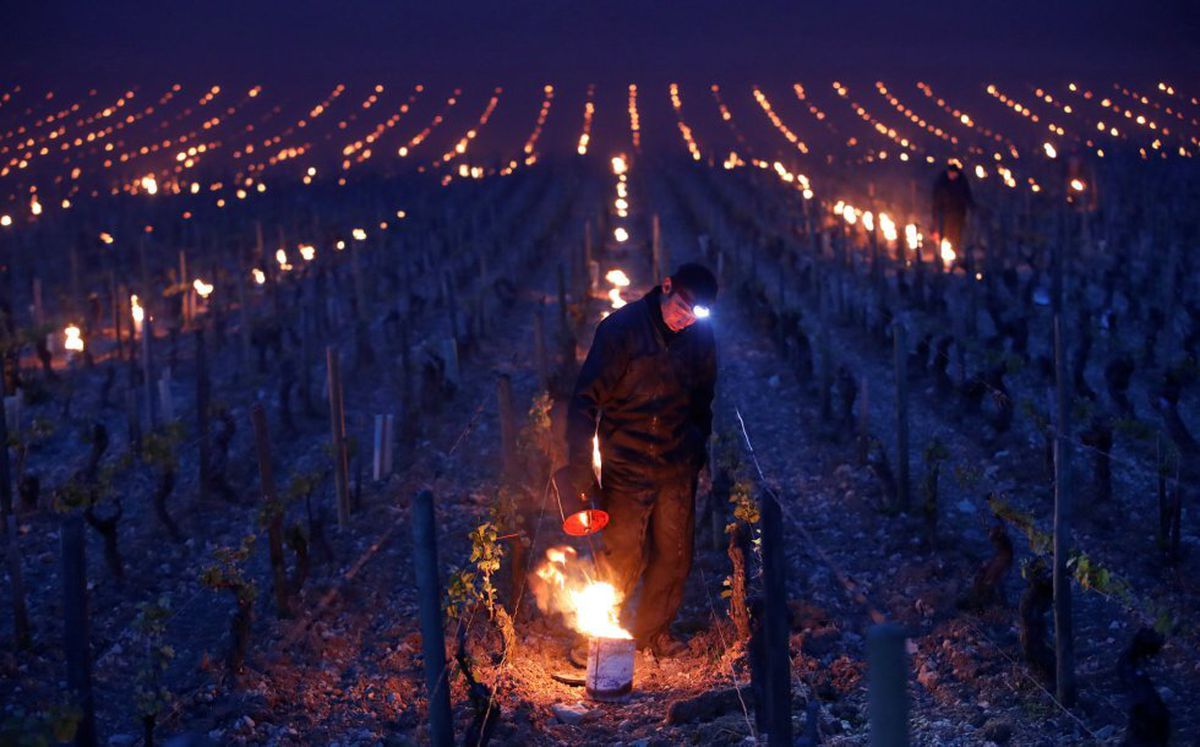 Ludovic Barat has already lost count of the nights he has not slept since, almost two weeks ago, the frosts began that have destroyed much of the crops throughout France. Too many, says this winegrower from Chablis, the town that gives its name to white wines of great international reputation. Images of vineyards like yours lit up at night with braziers throughout the Burgundy region went around the world. A “beautiful, but terrifying” scene, says Barat who, like a good part of the farmers in this area and many others in France, fears that despite his efforts, he will lose practically all his harvest due to a natural disaster that has affected almost the entire country and that the Government estimates will cause multimillion-dollar losses, beyond seriously disturbing the market.

After visiting farmers in the Hérault department this Saturday, also very affected after suffering an unprecedented drop in temperatures in this area of ​​southeastern France, Prime Minister Jean Castex announced the creation of an “exceptional solidarity fund” of 1,000 million euros for those affected by the frosts, which will be added to other aid and tax measures to be specified as the damage is confirmed, which has not yet been fully accounted for. “The State must be at the height of this catastrophe. The situation justifies it ”, he declared.

Nobody disputes it. “We are probably facing the biggest agricultural catastrophe of the 21st century,” French Agriculture Minister Julien Denormandie said this week. Although in recent years there have been several hard frosts, the last in 2017, to find one of this intensity and impact, in almost the entire country and at a time when many of the crops were flowering, especially after a week prior to the frosts. of great heat throughout France, we must go back to April 1991. “We are talking about several hundred thousand hectares, I said well, hundreds of thousands of hectares affected (…) in terms of money it will be very significant,” Denormandie warned before to announce the first aid. These, although welcome, will probably be “like throwing a bottle of water into the sea”, says arboriculturist Alain Duruz, who has lost practically 100% of his fruit trees in Jussy, also in Burgundy, and is waiting for them Authorities estimate their losses to know how much aid they will be able to aspire to now that “no money is going to come in” for what normally represents a substantial part of their income, which is completed with a small cereal farm, less affected.

The frosts are not over yet and a full damage estimate cannot be made for a few weeks or months. Even so, the first figures are already dizzying: in the wine sector alone, 80% of the country’s vineyards have been affected in different ways. At least a third of the annual wine production in France has been lost, some 2 billion euros in sales, according to Jérôme Despey, secretary general of the union FNSEA farmer and viticulturist of Hérault.

Ten of the 13 regions of mainland France have suffered from frost. In addition to vineyards, they have damaged beet crops – before the second wave of frosts this week, the union of growers of this key product for the sugar industry, which also trembles with this catastrophe, already estimated to have lost more than 10% of their harvest – rapeseed or fruit trees. “The consumer will have much less access this year to apricots, cherries (…) and prices will probably suffer,” Denormandie warned.

In the Yonne department where the famous Chablis wines come from, but which also boasts the fame of its cherries, the year is already lost.

“The frosts have affected almost 100% of the cherry trees, our beautiful landscape has gone from the white of the flowers to the brown in a single night,” laments the president of the Yonne Chamber of Agriculture, Arnaud Delestre. In addition, 70% of the apple trees, another source of local pride, have suffered irreparable damage from the frosts, which have also destroyed practically 100% of the plum, peach or nectarine harvest, he lists by consulting some figures that grow every day.

Alain Duruz doesn’t need statistics. It is enough for him to walk through his lands, a dozen hectares of fruit trees that just a few days ago were in full bloom and today look withered. Some cherry blossoms seem to have resisted. But they cheat. Duruz plucks one of the few still-white flowers, which almost melts between his fingers. “The interior is black. She is dead ”, he confirms. The year is lost, because these crops bear fruit only once a year. Duruz planned some investments in his land, but after the shock of these frosts, the hardest — and especially the longest — that he remembers in his two decades as an arborist, everything has been put on hold. “Morale is on the rocks,” acknowledges this 42-year-old farmer and about to have a second child.

Ludovic Barat’s spirits are not much better. Despite the white nights to combat the frosts – the thermometers have dropped to -8 degrees in Chablis – the damage to the land in the hands of his family for six generations is immense. Of the 6,000 hectares of vineyards that are cultivated in this town, only about 600 have been protected from the cold. Barat shows the brown buds – dead – of the vines that he also showed this week to a group of local politicians who visited him to inspect the damage. Give up at least 80-90% of this year’s harvest. “And we already know that 2022 will also be affected,” he says about the magnitude of a damage that joins an especially hard year for viticulture due to the closure of the hotel industry due to the pandemic and the sanctions that Donald Trump ordered to French came in retaliation for the Google tax imposed by France. “It’s as if the vines have gotten sick with covid.” What are you waiting for now? Solidarity, he says. “French agriculture must receive the same support that is given to humans with the pandemic.”

The complicated path of agricultural aid

The distribution of compensation to French farmers affected by the frost is looming complicated. For starters, because times are different: while arboriculturists practically already know whether they have lost the harvest or not, winegrowers will still have to wait at least a few weeks or even months – even until harvest in late summer – before confirming the magnitude. of the damages. To this is added that the agricultural sectors are governed by differentiated rules that also diversify aid. Thus, arboriculturists will be able to benefit from the so-called agricultural calamities fund, which compensates for losses in harvesting and income for those crops such as fruit trees that cannot be insured.
Winegrowers, on the other hand, are excluded, since officially they can – and should – take out insurance to protect their crops against catastrophes such as a frost. Except that most of them do not – only a third have insurance – because the price does not compensate, as the Government itself recognizes. Hence, he has promised that the 1,000 million euros of exceptional aid announced yesterday can also benefit the wine sector, although the Minister of Agriculture, Julien Denormandie, has already advanced that the agricultural insurance system will also have to be rethought. “Are we willing for national solidarity to come in support of farmers to finance climate risks? We have to rethink the whole system! ”He claimed these days.
The Government also wants to “double” the funds provided in the multimillion-dollar economic recovery plan for the pandemic to “adapt agriculture to the effects of climate change in the long term,” according to Prime Minister Jean Castex.

Russians, the Sovereign 02 vaccine and sun and beach to reactivate Cuban tourism