From sacred waters to macabre scenery: the Ganges river, in India, overflows with deaths from coronavirus 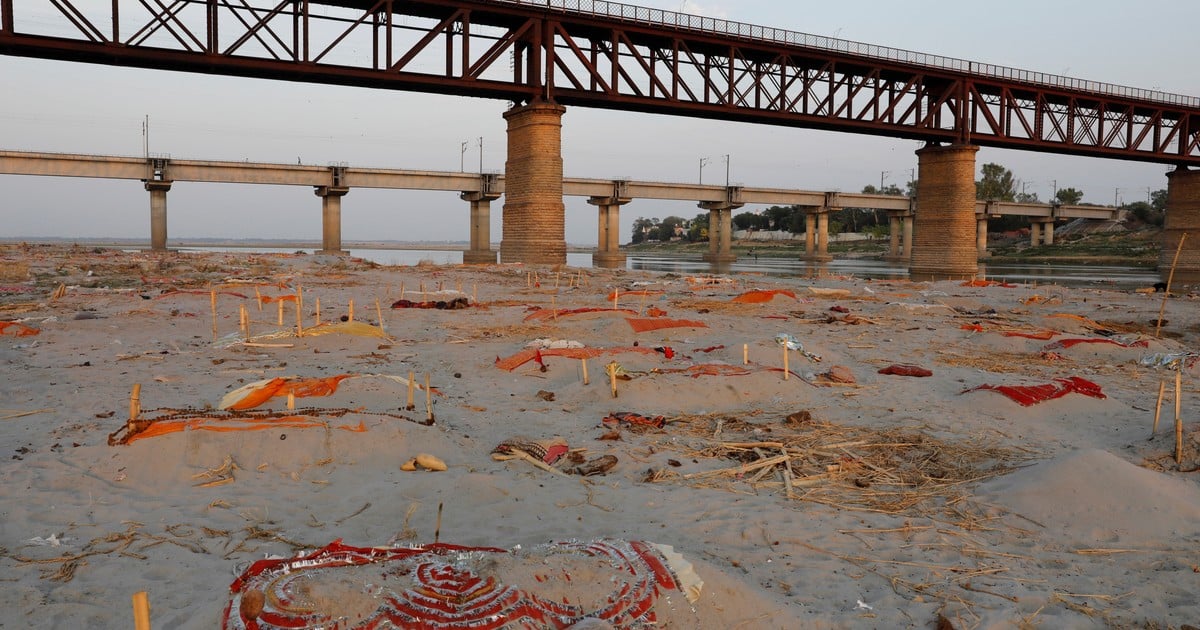 Among brown reeds, bodies wrapped in saffron cloth float in the sacred waters of the Ganges, a sad reminder of the ferocity of the coronavirus in India, which took tens of thousands of lives in a few weeks.

During the months of April and May, cemeteries and crematoriums were overwhelmed by the extraordinary daily influx of deaths from covid-19.

Due to lack of space or resources, many families in northern and eastern India were forced to throwing the bodies of their loved ones into the waters of the Ganges, sacred to Hindus.

Others chose to bury them in graves, just dug into the sandy banks of the great river, epithet of the mother goddess Ganga Ma, who gives and takes life.

But the arrival of the monsoon, accompanied by its torrential rains, caused flooding and dislodged the dead buried on its banks.

Funerary pyres on the banks of the river

About 150 bodies that turned up in the last three weeks were cremated, authorities in Allahabad, a major Hindu pilgrimage site in the northern state of Uttar Pradesh, told AFP.

Now the funeral pyres multiply on the banks of the river, where they pile up piles of firewood in anticipation of more bodies turning up to incinerate.

Relatives of a person killed by coronavirus cremated his body, near the bank of the holy river Ganges, in India. Photo: AFP

Dozens of partially submerged bodies were still lying in the river, AFP found.

At the height of the second wave of the epidemic, up to 600 bodies were summarily buried on the banks of the Ganges, according to city authorities.

But some residents believe that figure is underestimated and they fear new bodies will appear during the next floods.

Millions of Hindus traditionally flock to the Ganges to bathe and wash their sins or to perform funeral rites, which result in the cremation of the dead on its shores and then their ashes are scattered in the waters.

Sonu Chandel, a boatman who works in a crematorium on the banks of the Ganges, remembers the scenes from a few months ago of summary burials that shocked him and he is worried about rising waters.

“It was very sad to see these poor people bury their loved ones in such an unworthy way, and the rising waters only make the situation worse,” he told AFP.

“I am always afraid that a body will hit my paddle or that my boat will pass over a corpse when the water rises,” he added, traumatized.

The Kumbh Mela is held every 12 years and the venue is chosen from four cities, Allahabad, Haridwar, Nasik and Ujjain.

This situation “runs the risk of causing dangerous diseases. The government must investigate it,” Dipin Kumar, who lives near the Ganges in Allahabad, told AFP.

The inhabitants of other important religious sites in northern India, located downstream, they fear that the prolonged presence of corpses will further infect the river, one of the most polluted in the world.

Police and state rescue teams are patrolling the river for bodies.

The authorities mobilized two boats for this task on the shores and sometimes resort to local fishermen.

“The flow is very fast,” a police officer told AFP. “Right now it is a challenge to get the bodies out,” he said.