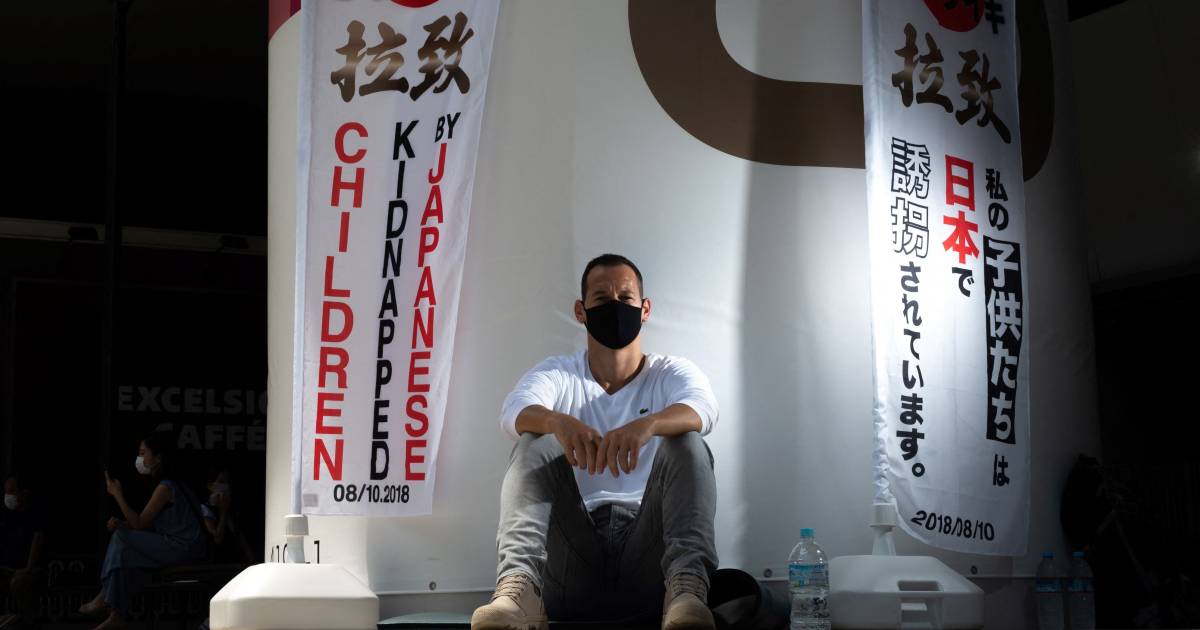 A Frenchman living in Japan has gone on hunger strike after being banned from seeing his children for three years. His now 6-year-old son and daughter two years younger, according to him, were kidnapped by their Japanese mother. The expat chose a train station near the new Olympic stadium in Tokyo as the setting for his remarkable protest.

Vincent Fichot (39) started his hunger strike today, two weeks before the start of the Olympic Games in Tokyo on July 23. Not by chance according to him. French President Emmanuel Macron will attend the opening ceremony of the sporting event. On his last visit to Japan, in 2019, the head of state promised to stand up for French parents in the country who are not allowed to see their children, citing “emergencies that are absolutely unacceptable.”

Vincent Fichot (39) says he finds himself in such an emergency. “I gave it my all, lost my job, my house and my savings in the past three years. I have 80 kilos left and will give my weight to the last gram,” he told AFP news agency on Saturday, sitting on a mat at the entrance of a station not far from the new Olympic stadium in Tokyo.

The Frenchman, who has lived in Japan for fifteen years, assures that he will not stop his protest until he has his son (6) and daughter (4) back. He wants the French authorities to show him that they “really” want to defend his children and “impose sanctions on Japan” for failing to fulfill international obligations.

According to him, his former wife kidnapped the children in 2018. She stated in court that she did so because of ‘domestic violence’ by her French ex, but after some time the Japanese withdrew her complaint. “The Japanese justice can no longer blame me,” Fichot declares. Shared custody of children in divorce does not legally exist in Japan, making parent abduction a common practice and tolerated by local authorities. There are no official figures, but interest groups estimate that 150,000 minors are the victims of such kidnappings every year.

Fichot’s French lawyer Jessica Finelle speaks of a ‘desperation cry from a father who has tried everything for three years to find his children’. According to her, he is part of a group of ten fathers and mothers of four different nationalities who filed a complaint with the United Nations Human Rights Council in 2019. At the end of 2020, a preliminary judicial investigation was opened in France against Fichot’s ex for kidnapping minors.

“We now need important diplomatic acts, such as the recall of the French ambassador to Japan or the suspension of the strategic partnership agreement between Japan and the European Union recently ratified by France,” the lawyer emphasized. “Only concrete actions can compel the Japanese authorities to respond.”

Vincent Fichot meanwhile takes into account that the police will chase him away, but says he will continue his hunger strike at another location. He can shower at a nearby gym for the time being, and members of a support committee, including other foreign parents in the same situation, regularly bring him water and clean clothes. They also charge his electronic equipment with which he wants to record and publish a short video daily on his Facebook page. In the videos, he provides updates on his physical condition and explains ‘the problem in Japan’.