Freed after pardons, separatists claim the independence of Catalonia 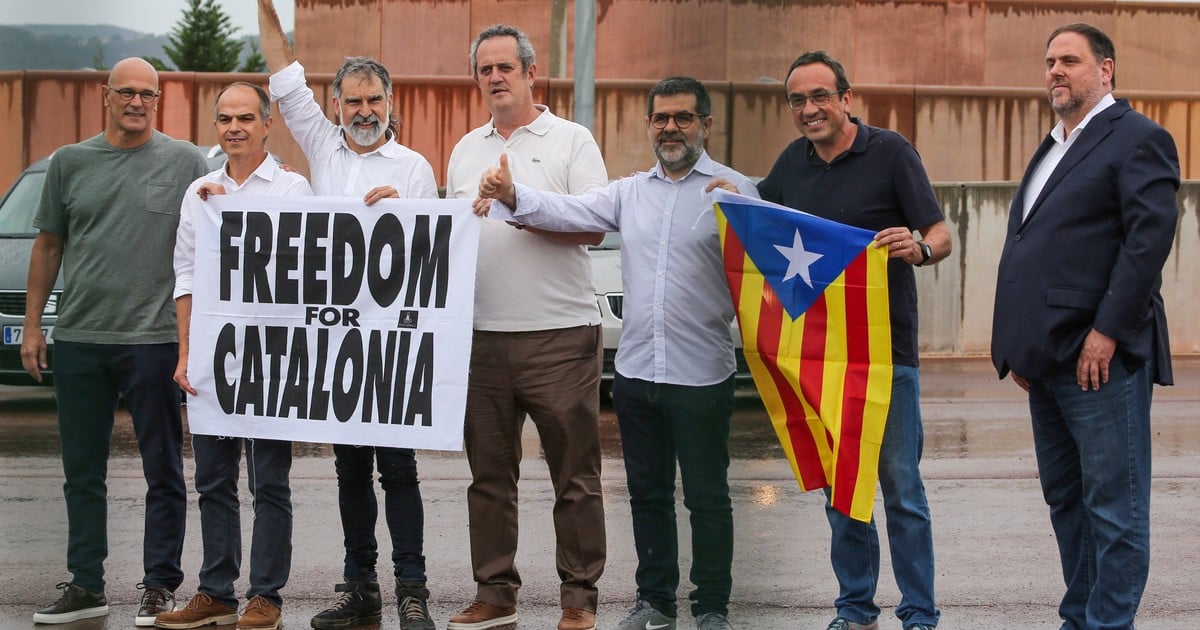 To the cry of “Long live Catalonia free! ”, the nine Catalan independence leaders who were serving their sentences for having participated in 2017 in the attempt to separate this autonomous region from Spain were released this Wednesday thanks to the pardons granted by the Pedro Sánchez government.

Dispersed in three Catalan prisons at whose doors relatives and militants waited for them with umbrellas, banners and chants in favor of separatism, the former vice president Oriol Junqueras; its former ministers Raül Romeva, Jordi Turull, Josep Rull, Dolors Bassa and Joaquim Forn; the former president of the Catalan Parliament, Carme Forcadell, and the social leaders Jordi Sànchez and Jordi Cuixart they regained freedom at noon.

They had been in jail for three and a half years for organizing the illegal self-determination referendum on October 1, 2017, which led to the frustrated unilateral declaration of independence.

And despite the fact that in 2019 the Supreme Court sentenced them to sentences of between 9 and 13 years for sedition, embezzlement and disobedience, this Wednesday they left their cells.

The pardons, approved on Tuesday by the Council of Ministers chaired by Sánchez, signed by King Felipe VI and already published in the Official State Gazette, exempt them from serving the remainder of their prison but It maintains the penalties of disqualification from holding public office.

The release granted is also conditional on the pardoned not repeating the crimes committed or others, at least in the next 3 and 6 years.

At the prison gates, between hugs and tears, the nine leaders delivered messages in which they did not give up an iota in their intention to vindicate the independence of Catalonia and amnesty.

“We are aware that today, when we get out of jail, nothing ends, everything continues. Today we are nine more people who join the effort, who continue working for amnesty, for the freedom of this country and independence is the freedom of this country, “said Junqueras from the stage that was waiting for him at the exit of the prison in Lledoners, where he was received by the Catalan president, Pere Aragonès.

“Prison does not bend us to anything,” said Junqueras. On the contrary, it reinforces our convictions. “

For the former president of Parliament, her release along with her colleagues “is a step on this path. It is not a great victory but it is a victory ”.

“What we want is amnesty. Do not suffer that we will achieve an end to the repression ”, added Carme Forcadell.

“If they believe that locking us up in prison will take away our desire, they are in the wrong town,” said Raül Romeva, a former foreign minister.

Romeva was fired in 2017, after the attempted unilateral declaration of independence, when the national government of Mariano Rajoy intervened in Catalonia.

“They have given us a partial, conditional and reviewable pardon, but our commitment is neither partial, nor reviewable, nor conditional,” added Jordi Turull, former counselor of the Presidency.

The pardons tightened the parliamentary interventions in the control session to the government this Wednesday.

“It has gone to the edge of the nationalism that Spain abhors. If you have any dignity left, you should resign today and submit that decision to the judgment of the Spanish, Mr. Sánchez ”, the leader of the opposition and president of the Popular Party, Pablo Casado, threw at the head of the Spanish government.

“Answer the Nation why you have betrayed your oath to defend national unity and the equality of all Spaniards,” Casado asked him.

Pedro Sánchez defended himself: “This measure is a courageous measure, it is a restorative measure in favor of coexistence and harmony. It is a measure that will reduce political and territorial discord, “he said.

He was heard by the deputies of the Republican Esquerra of Catalonia (ERC) whose leader, Oriol Junqueras, is one of the politicians pardoned.

“I personally thank you for your courage in the face of the pack,” the spokesman in the Esquerra Congress, Gabriel Rufián, told Sánchez. But the question is whether it is courage or necessity. “

The head of the government of Spain, Pedro Sánchez, criticized for the pardons to the Catalan separatists. Photo: AP

The opposition to the PSOE-Podemos coalition government that has governed Spain for a year and a half insists that Sánchez pardons the convicted Catalan independentists to continue counting on the parliamentary support of the nationalist parties, necessary to guarantee their governability.

Questions that, in reality, are circulating with more and more uncertainty in Catalonia.

Because the independence movement, which did not win the February elections in terms of the number of votes but did achieve the parliamentary majority by uniting the votes of the three nationalist parties, had a hard time agreeing to form the government that today is chaired by Pere Aragonès, from Equerra .

Esquerra, the most moderate separatist force is betting on achieving a self-determination referendum agreed with the government by Pedro Sánchez.

But its partners in the Palacio de la Generalitat, Junts per Catalunya, are more supporters of returning to shock and one-sidedness, as they claim, in a more radical way, the anti-establishment of the CUP, who gave Aragonès a deadline with a countdown to achieve the independence of Catalonia.

“Everyone can defend the ideas they consider. The only thing that I am going to ask you and those who are currently governing the Generalitat of Catalonia, is to defend the constitutional pact, democratic legality and the autonomy statute of Catalonia, “said the head of government this Wednesday in Congress .

Sanchez hastened the pardons before his long-awaited appointment with Pere Aragonès to reactivate the dialogue table between the Catalan government and Moncloa: it will be on June 29. By then, the pardons will be about to serve their first week of freedom.