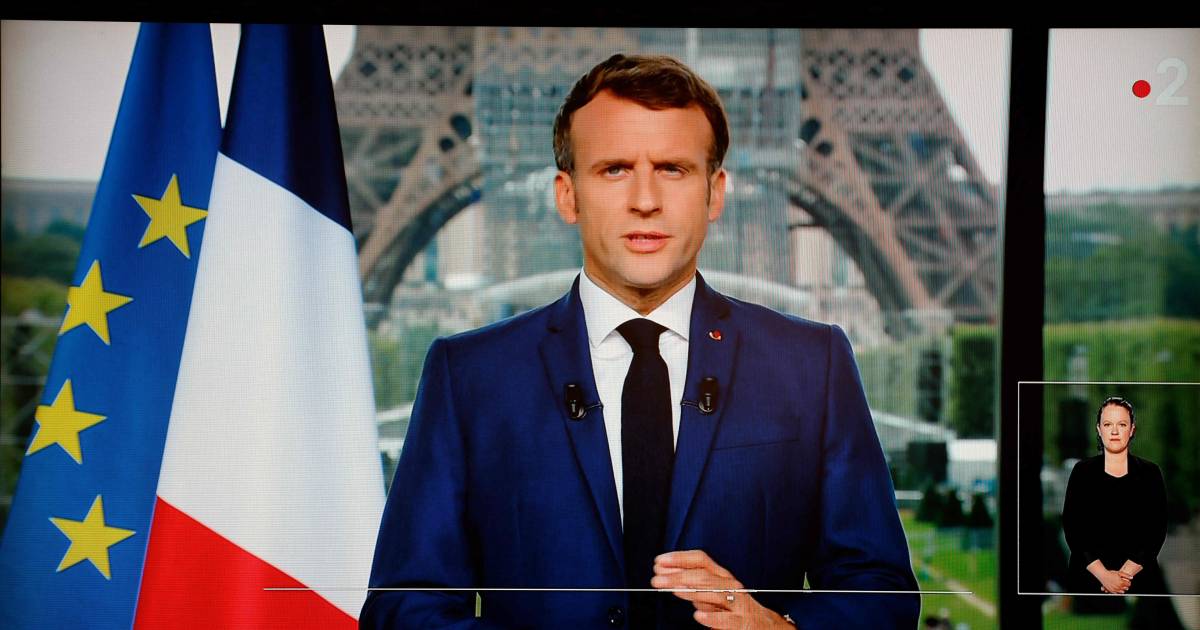 France is going to tighten border controls, especially for travelers from risk countries. In addition, the health pass will be mandatory from August in the catering industry, shopping centers and when traveling by train, plane or long-distance bus. French President Emmanuel Macron announced these and other new corona measures during a televised speech this evening.

Macron also announced that PCR tests are no longer free for foreign tourists, as French people abroad must also pay for these tests. The new measures are intended to slow down the spreading wave of the delta variant. “This variant is three times more contagious than the original virus, spreading rapidly in areas not covered by vaccination,” the president said. He therefore called on the population to be vaccinated, especially people over 60 and people with poor health. “We must work towards the vaccination of all French people,” Macron said.

He summarized the general idea as follows: “imposing restrictions on the unvaccinated instead of everyone”, before announcing the generalization of the health card to check whether a person has been vaccinated or not infected.

“The health pass will be mandatory from August in cafes, restaurants and shopping centers, but also in hospitals, retirement homes and medical-social institutions. Again, only people who have been vaccinated or tested negative will have access to these places,” the president said, adding that the health pass is also mandatory within ten days “in places of leisure and culture, such as cinemas and theaters.”

Since June 9, all residents of the European Union can travel through France if they can demonstrate their full vaccination status. This has been possible since 1 July with the help of the European corona certificate. If travelers (over 11 years old) do not have such a corona certificate, they must be able to present a negative PCR test or antigen test (not older than 72 hours), even if they are transiting.

The French police are already strictly checking whether tourists meet the necessary entry conditions to enter the country. Even when traveling through, travelers must meet all the conditions, according to a report by the Flemish VTM News last week.

The French president also announced that corona vaccination will be mandatory for healthcare workers and people who come into contact with risk groups through their work. From September 15, the measure will be monitored and people who do not comply with it can be punished. Healthcare personnel who have not been vaccinated after that are no longer allowed to work and are no longer paid, clarified health minister Olivier Veran.

Veran called on health care providers to get vaccinated immediately, even if they have two months. Employers are authorized to carry out checks such as those that already exist for other diseases, such as hepatitis B. This concerns a total of approximately 1.5 million employees in the healthcare sector.

With the mandatory vaccination, the government is following the advice of the French High Authority of Health (HAS). The HAS had recommended Saturday to introduce the obligation as soon as possible. During his speech, Macron also openly questioned whether not all residents of France should receive a mandatory corona vaccination.

The French online platform where people can make a vaccination appointment ran aground shortly after Macron’s speech when up to 17,000 people per minute wanted to book a time slot. The Doctolib site had a six-minute wait to access until about 8:40 PM. That waiting time had already increased to nine minutes at 8.48 pm, Franceinfo reported.

France had registered 4256 new infections on Sunday evening. More than one in two cases involves the delta variant. The increase in the number of infections is not yet visible in French hospitals. There were 7,137 corona patients there today, 46 fewer than a day earlier. 957 patients are in intensive care as a result of an infection with Covid-19 (+10). A week ago, there were still more than 1000. In the past 24 hours, 28 corona deaths were registered.

The number of new corona infections in the Netherlands is also rising so quickly that it is not a question of whether the Netherlands will be a risk country, but when. Due to the more contagious delta variant and the abandonment of many measures, the infection figures are growing so fast that the Netherlands is heading for a red or dark red coding in the categorization of ECDC, the European RIVM. The carefree, southern European summer vacation that many Dutch people eagerly look forward to after a year and a half of corona misery is therefore coming under pressure.

The National Institute for Public Health and the Environment (RIVM) recorded 8522 positive corona tests last 24 hours. That is less than the past two days, but more than five times as many as the 1,521 cases from Monday a week ago. On Sunday, the number of official corona infections ended at 9,369, while RIVM recorded no fewer than 10,281 new cases on Saturday. That was the highest number since December 25. The National Coordination Center for Patients Spreading (LCPS) expects greater occupancy in the intensive care units and nursing wards from this week.

Not only the Netherlands and France, but also tourist attractions such as Portugal and Spain are struggling with rising infection rates.

Watch our videos about the corona crisis below.