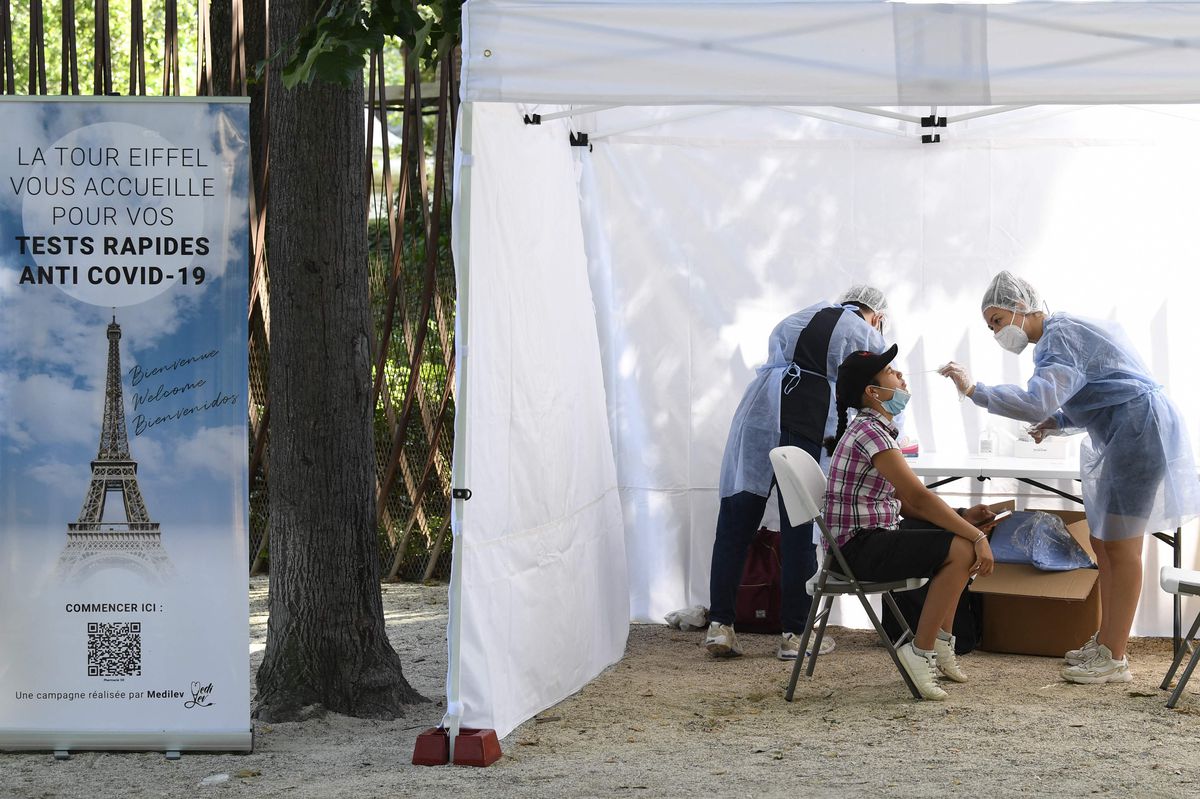 France has begun to deploy a complex regulatory arsenal to incite the population to be vaccinated and to veto a large part of social life to those who refuse to be immunized. Since Wednesday, it is forbidden to enter without the health certificate in any cultural and sporting event where more than 50 people gather, including tourist attractions. The covid certificate certifies the complete vaccination of the holder or the negative result in a test carried out in the previous 48 hours. The protests, at the moment minority, of anti-vaccines and other critics of the measures of President Emmanuel Macron have rekindled the fear that a social protest such as that of the movement of the yellow vests, that two and a half years ago put the French Government in trouble.

In the cinemas of Paris it was necessary to show the certificate and an identity document. At the doors of the Louvre museum, in the French capital, you had to show the certificate and the ticket reserved in advance. At the foot of the Eiffel Tower, some tents had been set up where, for 25 euros, tourists without a certificate could be tested for antigens. Five minutes later, the result arrived and, document in hand, they could go up to the legendary building. “It’s very good, it’s safer,” she said while waiting for the test Elaine Heredia, a 42-year-old woman who lives in Toledo and visits a friend in the city. “You have to go up, of course!”

The extension of the requirement of the covid certificate – until now it was only requested in events of more than a thousand people – is the prologue to the broader measure that must come into force in August and that Parliament must adopt this week. From then on, without the certificate, they will not be able to travel by train or plane, nor will they be able to access restaurants and cafes, or their terraces. At the same time, Macron has decided that health personnel must be vaccinated between now and mid-September under the threat of sanctions that can lead to job loss.

The application of the first measures on Wednesday coincides with the beginning, on the same day, of a tense parliamentary debate, while the Government already speaks of a fourth wave driven by the delta variant and an explosion of infections, and is closely observing the outbreaks of popular discontent. On Saturday 114,000 people demonstrated across France against the measures – 18,000 of them in Paris – a modest figure compared to some social mobilizations, but higher than what the authorities expected.

“It is necessary to avoid that an excess of zeal in the application of the measures puts to the people of the nerves and creates new ones yellow vests ”, said the president of the National Assembly, Richard Ferrand, according to the satirical and investigative weekly Le Canard Enchaîné. A report from the internal intelligence service, quoted this Monday by the newspaper Le Parisien, analyzes: “As happened during the crisis of the yellow vests, the longer the conflict lasts, the greater the risk that the most determined and the most radicalized will succeed in taking command ”.

Resistance to the plan announced by Macron on July 12 moves on several planes. There is a philosophical criticism, formulated among others by François-Xavier Bellamy, MEP of Los Republicanos (LR), the party of the traditional right, and professor of Philosophy by profession. Bellamy writes in Le Figaro: “For the first time in our history, it will be necessary to present a health document to carry out the simplest acts of daily life: go by train, enter a shop, go to the theater”.

There is another criticism, of a political nature, which points to the procedure by which Macron wants to impose his measures: some – those that came into force on Wednesday – without going through Parliament; others with express legislation and with a debate limited to a few days in which the organization of French society is at stake in the coming months.

There is a third criticism that is extra-parliamentary and that brings together a heterogeneous coalition that includes subscribers to conspiracy theories, anti-vaccines, people who declare themselves in favor of vaccines, but reluctant to that of covid-19, citizens convinced that Macron takes advantage of the pandemic to impose a dictatorship, others who display Stars of David as if they were Jews during Nazism and even some who have threatened politicians favorable to Macron’s plan …

“Freedom, freedom!” Cried those attending one of the demonstrations that took place on Saturday in Paris, one of the first of its kind in France since the start of the pandemic a year and a half ago. One of the attendees declared: “I don’t feel like entering a new type of society with total control and with prohibitions of all kinds. I want to continue living as before ”. The man, who said he is a 29-year-old school teacher, did not want to reveal his identity: “It is not known how this could end, it could end in a dictatorship. It is already beginning ”.

At the demonstration there were health workers who resist the vaccine and who, when the law is approved, must put it on out of obligation. “We respect those who get vaccinated,” said Emily Desserre, 38, an educator specializing in child psychiatry at a public hospital. “But we reject that they impose it on us and put social pressure on us, that they give us moral lessons and that they threaten us, that they prevent us from going to work and that we can be left without employment or remuneration.”

For now, however, Macron’s announcement has resulted in a flood of vaccinations. In the last week, 3.7 million French people have made an appointment to get vaccinated on the popular Doctolib website.

At the foot of the Eiffel Tower, on Wednesday, the vast majority of the 200 people who had taken the test by mid-afternoon were tourists who had not been fully vaccinated or had tests that were too old. “Since this morning we have not had any positives,” said Matteo Edjeou, a 19-year-old medical student who was in charge, along with other colleagues, of conducting the tests. “Let’s touch wood.”

Restrictions in Italy to the unvaccinated

The Italian Executive, chaired by Mario Draghi, plans to approve this Thursday the implementation of the green certificate (the safe-conduct that accredits vaccination) to progressively access public spaces. The idea of ​​the coalition government is similar to the French one and basically constitutes a technical-political formula to force the entire population to be vaccinated, unless they prefer to stay indoors. In addition, Draghi is also preparing the extension of the state of emergency (it ended on July 31) until the end of the year.

The data on infections are beginning to worsen in Italy and the Government wants to accelerate the vaccination campaign in the youngest bands. But, above all, also among those who have doubts about the advisability of doing so (in Italy the anti-vaccine movement is very strong). Most sectors agree to implement the certificate for the main public activities. Also the employers’ association, which has proposed that it be mandatory to go to work. Something that has drawn criticism from the unions.

The implementation of the certificate will be carried out in three phases. In August it will be mandatory to have at least one of the doses of the vaccine to attend cultural and sporting events. Also, surely, to eat or drink in closed spaces of restaurants and bars. In September the two doses will be ordered for the same activities and, from the 15th of the same month, it will also be required to enter public transport.