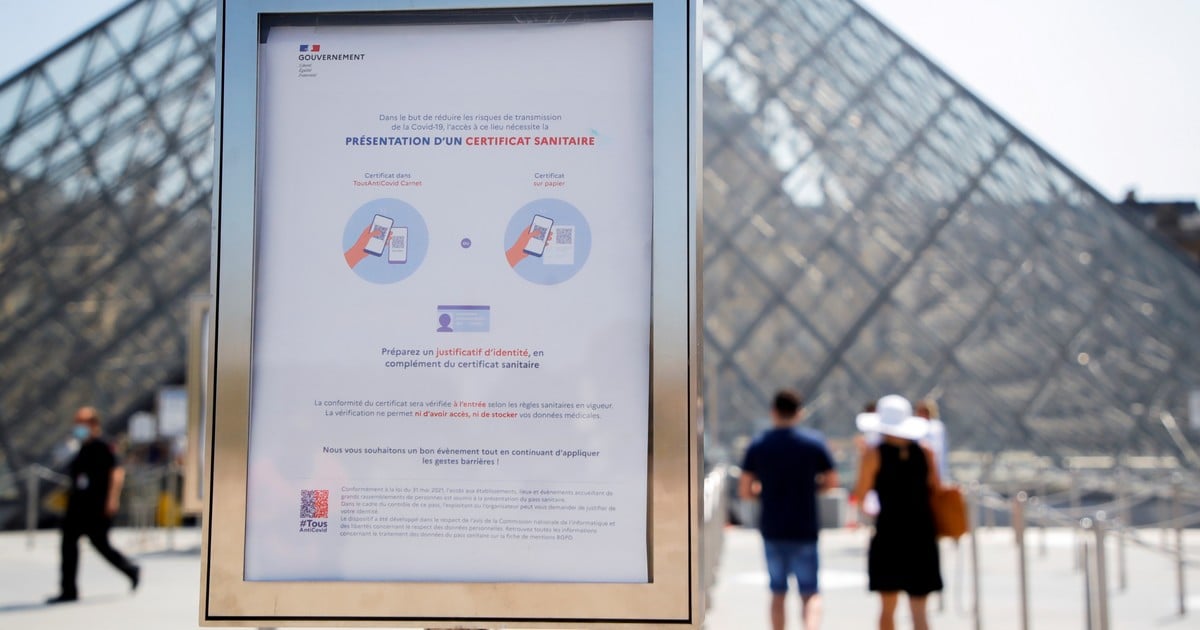 The fourth wave of coronavirus in France it is already official, this Wednesday, the day that the controversial health passport comes into force, which is carried on the phone and it is mandatory to be able to enter a museum, go to the cinema or climb the Eiffel Tower, in addition to new restriction measures in a climate of high tension that some call “health dictatorship.”

The authorities imposed new restrictions in cinemas, theaters, museums and events of more than 50 people, where it can only be accessed by presenting a negative covid test or vaccination certificates.

The restrictions imposed on certain sporting events and fairs also came into force, according to information from the newspaper ‘Le Figaro’.

Queues to enter the Louvre with a health pass. Photo: Reuters

Since the beginning of August, these measures will spread to long distance trains, bars, restaurants, shopping centers and hospitals.

The president, Emmanuel Macron, has convened this Wednesday a new defense council to address the advance of the Delta variant at a time when the country is facing the fourth wave of infections, with a “high risk”. Government spokesman Gabriel Attal has indicated that more than half of the population has received at least one dose of the vaccine.

Climb to the eiffel tower

The new passport necessary in France is already necessary to climb the Eiffel Tower, enter museums or cinemas, the first step in a new campaign against what the government describes as “Stratospheric” increase in infections.

Visitors fill in their personal details in order to enter the Puy du Fou park in Les Epesses. Photo: AFP

To obtain the pass, those interested must show that they are fully vaccinated, present a negative test for the virus or a test of having recently passed COVID-19. This requirement came into force this Wednesday after a decree approved by the government. Now the National Assembly analyzes since Wednesday to approve it through a law, in a climate of high tension.

Macron promotes the law that requires the use of this type of pass in restaurants and in many other spaces of public life, and requires vaccination of all medical professionals.

This has generated resistance in some sectors, and anti-vaccine protesters are planning to mobilize Wednesday, arguing a “health dictatorship.”

During the weekend thousands of people have taken to the streets to protest against the new government measures, while several vaccination centers have been subjected to vandalism.

The daily number of infections in France fell drastically in spring, But in the last two weeks it has picked up again and some regions are imposing restrictions again to slow the spread of the virus.

The government is concerned that this may translate into higher hospital occupancy In the next weeks.

This Wednesday they registered 18,181 new cases, when a week before they were less than 7,000. It is a level that has not been reached since mid-May.

However, in cultural events and shows in which the health certificate is required, it will no longer be essential to wear a chinstrap. even if they take place in a closed space.

The Minister of Health, Olivier Véran, announced this Tuesday the end of that obligation that clashes with recommendations of some of the scientists who advise the Executive and that surprises at a time when the number of infections is skyrocketing in France.