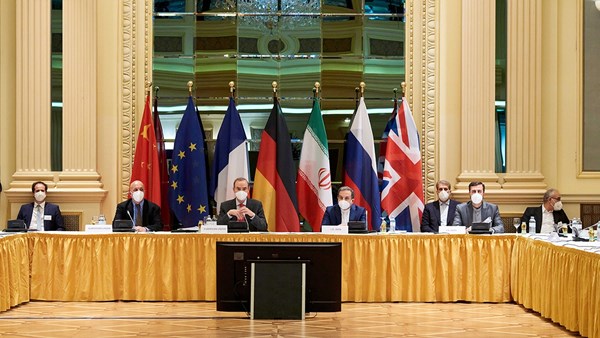 France considered yesterday that time is not on anyone’s side in talks aimed at bringing the United States back into the framework of the 2015 nuclear agreement between Tehran and major powers, two days before the Iranian presidential elections.
And the French Foreign Ministry announced that major differences still existed, while representatives from Britain, China, France, Germany, Russia and Iran sought to achieve a breakthrough in the ongoing negotiations in Vienna.
“Negotiations may become more difficult when the discussion focuses on more difficult issues, great differences still exist,” the French Foreign Ministry said in a statement. “This means that there is a need for courageous decisions that must be taken quickly, because we all believe that time is not on anyone’s side,” the ministry added.
The French Foreign Ministry’s statement came in response to statements by the Director of the International Atomic Energy Agency, Rafael Grossi, reported by an Italian newspaper, in which he indicated that any agreement will not be adhered to before the new Iranian government takes office, which could take about two months.
Rafael Grossi, Director-General of the International Atomic Energy Agency, said in statements published yesterday that efforts to revive the nuclear agreement with Iran must wait for the formation of a new Iranian government, adding that the agreement requires political will from all parties.
“Everyone knows that, at this point, it will be necessary to wait for the new Iranian government,” Grossi said in an interview with the newspaper “La Repubblica” in response to a question about the stage of the talks on reviving the agreement.
Grossi was apparently referring to the Iranian presidential elections scheduled for Friday.
The sixth round of talks to revive the nuclear deal resumed in Vienna last Saturday between Iran and world powers.
The UN agency is not directly involved in the negotiations but was called in to verify any steps agreed in the talks and to continue inspections in the country.
“The discussions that have been going on for weeks have dealt with very complex and sensitive technical issues, but what is required is the political will of all parties,” Grossi said.