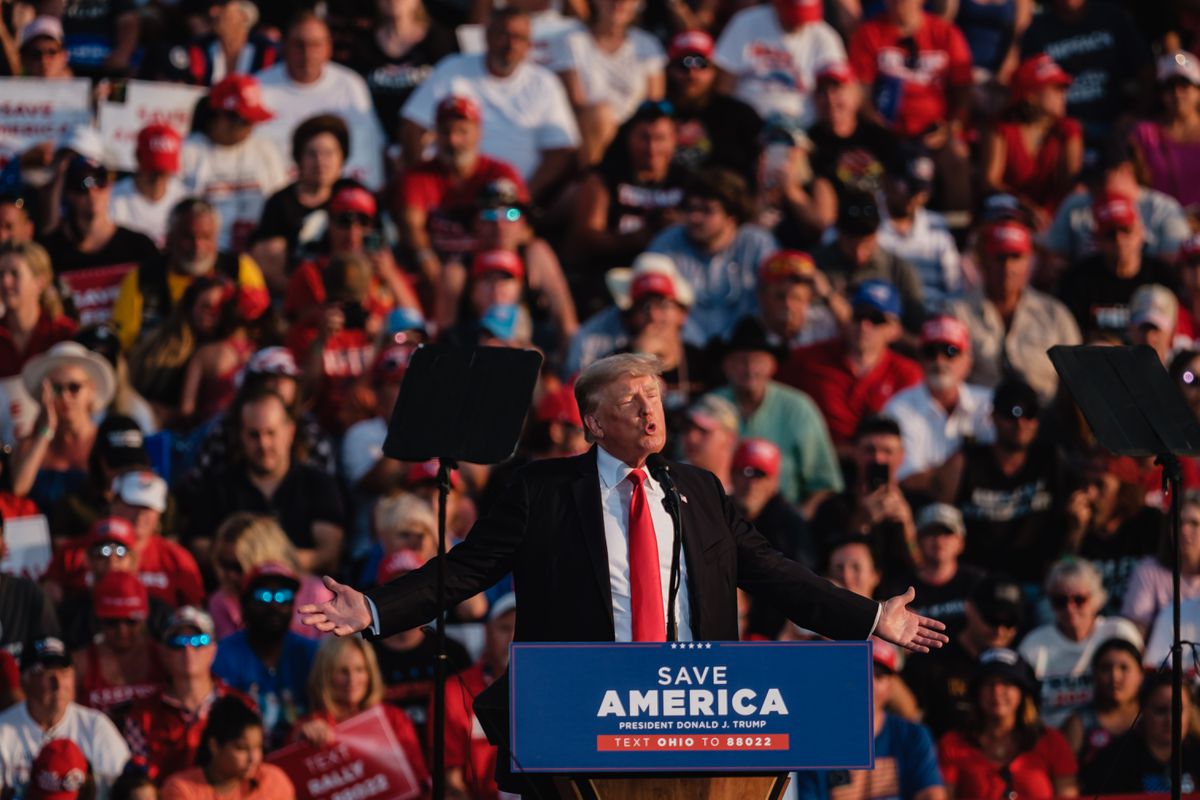 Unavailable to the action of justice, which scrutinizes possible irregularities in his business in the framework of a criminal investigation undertaken by the Manhattan prosecutor’s office, former President Donald Trump starred in his first rally on Saturday night since the assault on the Capitol, last January 6th. The objective was twofold: to heat up the campaign of the mid-term legislatures, in November 2022, and to separate the wheat from the chaff in the Republican ranks, that is, their unwavering supporters, from those who voted in favor of the impeachment for his promotion of the rampage.

The magnate appeared in Wellington (Ohio), where before several thousand followers he staged his return to public life, deprived as it is of the speakers of social networks. A Trump in top form wrapped up one of his collaborators in the White House, Max Miller, who will face in the Republican primaries next year the legislator Anthony Gonzalez, one of the Republicans who voted in favor of submitting him to the second impeachment. At stake is a seat for the Ohio district.

Although he did not clarify whether he will run in the 2024 presidential elections, Trump assured that Republicans want to regain control of both houses of Congress in the 2022 elections, and in 2024, return to the White House. “Trump is definitely our leader, due to his high popularity in the Republican base,” said Ohio Senator Rob Portman in statements to the ABC News television network, collected by the EFE agency.

In which it has been described by the media as a “revenge tour”, against the republican renegades who turned their backs on the second attempt at impeachment, Trump charged his successor in office, Democrat Joe Biden, for the “consequences of his immigration policies.” The invective is nothing new in the Trumpian discourse, which seeks to maintain its pull precisely in the context that is best given to it: mass rallies, direct contact with its supporters. That of Ohio was his first great public act since last January 6 he pushed his followers, shouting Save america (Save America), to the Capitol. That same motto was chosen to frame his speech on Saturday, as recalled by the lectern from which he spoke.

Trump spread tow everywhere, but especially to Republicans whom he considers disaffected, such as those who, for example, refused to support him in his unfounded allegations of fraud in the November elections, including legislator Anthony Gonzalez himself. Before a devoted public, he repeated the falsehoods about the alleged electoral fraud that have managed to penetrate Republican voters: according to a poll released this Monday, only 36% of them support the cleaning of Biden’s victory at the polls, compared to 57 %, who consider it a fraud. William Barr, who served as US attorney general between February 2019 and December 2020, and who calls Trump’s allegations of electoral fraud “nonsense” is not of the same opinion, according to a book that recounts the rupture of the president and Barr, based on several interviews with him and his assistants. Magazine The Atlantic has published a preview of the volume this Sunday, which will be published in November.

Underpinned by a small group of worshipers who embrace the alternate reality that presents them as the victim of an electoral robbery – a lawsuit that several courts have dismissed – Trump was backed at the Ohio rally by the radical Marjorie Taylor Greene of Georgia, Conspicuous promoter of the conspiracy theory known as QAnon.

Trump addressed a large number of issues, from Biden’s immigration policy to Israel or the use of a mask, with continuous appeals to the public present. “Do you miss me?” He asked the crowd, a question that elicited the biggest applause of the night. They miss me, he answered, satisfied.

It remains to be seen whether, despite Senator Portman’s statements about Trump’s “undisputed leadership”, the party enshrines Trump’s authority. The data, for the moment, are ambivalent. At the end of April, an NBC News poll showed that 44% of Republicans said they supported Trump more than the party, compared to 50% who said the opposite. It was the first time since 2019 that at least half of Republicans claimed to be more supportive of the party than of Trump.