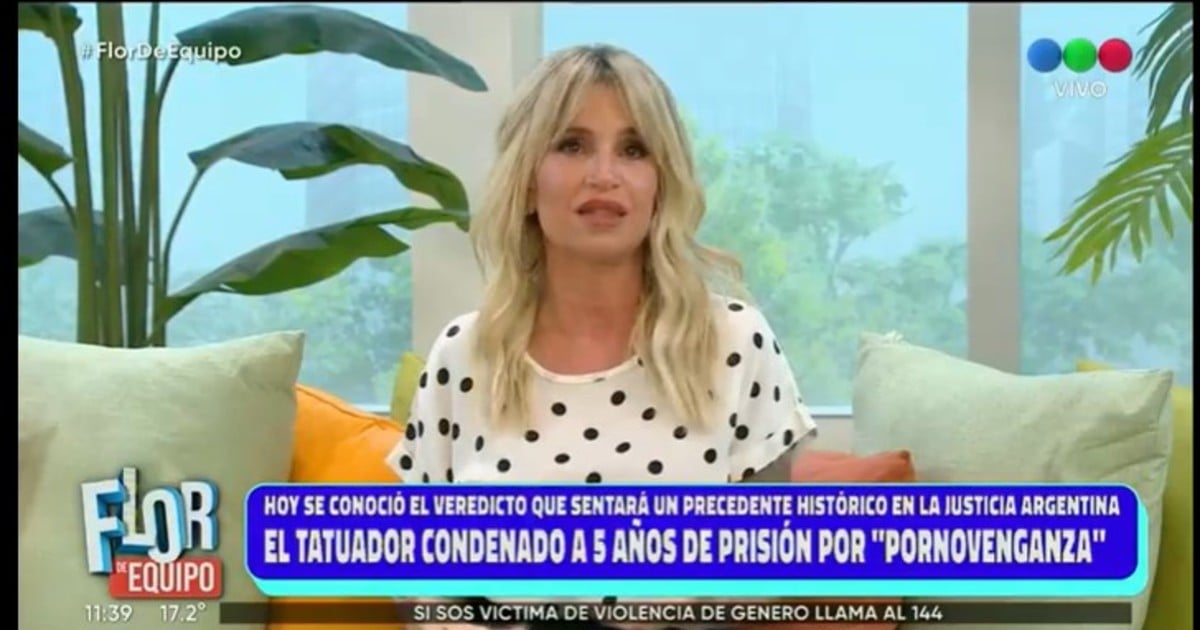 The victim Paula Sánchez Fraga accused Patricio Pioli for the viralization of a video where the two were seen having sex, and also digital gender violence directed towards it. On Team flower (Telefe, Monday to Friday at 11:30) discussed the issue and Florence Peña it broke.

Sure, the driver he relived the sensations he had in 2012 when a video in which she and her husband Mariano Otero were having sexual relations became viral. Even there are still several open trials that await definition by the actress.

Florencia Peña was moved when in her program they discussed the news of a sentence to a tattoo artist who viralized a video without the consent of her ex-partner. Capture TV

“I did not feel what I think luckily some women can feel today, that there is a different look on that”, He reflected, about how society evolved in that sense.

“I felt absolutely accused, denigrated as a woman And I also felt like I had to apologize for doing that in private, even with my husband. I still have five trials waiting for a resolution, ”she said, almost resigned by the times of justice.

“I listened to Paulo (Kablan) and this generates relive things that hurt me and my family too much”, Recalled Flor, nine years after the event occurred.

Flor Peña recalled the suffering she suffered when an intimate video with her ex-husband was leaked in 2012. Captura TV

“But on the other hand, this makes me see the advancement of laws and women’s rights, because this type of crime for us is forever. Every day of my life someone puts the video on the networks and I have to report links ”, she said, hopeful for growth in that sense.

Referring explicitly to the ruling of the Third Chamber Criminal and Correctional Court, chaired by Judge Edith Agüero, he pointed out that “It is very important to feel safe at this point, so it gives me great joy”.

In another part of the conversation with the correspondent, Flor added that “What I also understand by knowledge of the facts is that society becomes very hostile to a woman when very private questions are filtered, and not only is it what she could have experienced with the lawyers of the other party “.

“Also what it means for the environment of a woman that you are intimately exposed with things that you did not decide to show. It is very painful and for that reason this failure is very important. I say it as a victim of something of these characteristics, “he compared.

“In my case, for example, I never knew who hacked the material. It is very difficult to get to that instance. The important thing is that it be considered a crime and the justice considers that you are not guilty of having recorded or taken pictures of yourself in privacy“.

“Y no one has the right to filter those images if you do not give consent. It really is very difficult for a woman. It never stops, It is full of documentaries of young people in the world that filter an intimate video and many of the victims even commit suicide because of that, “she closed ruefully.