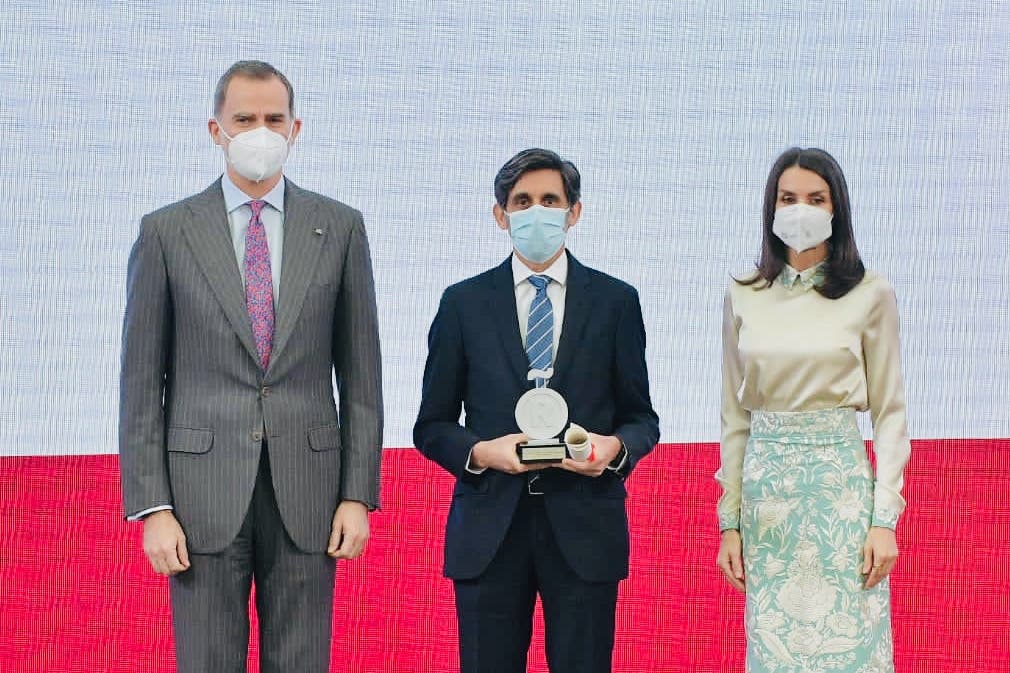 Queen Letizia of Spain proved she was ready to put Spring in her step when she attended an awards ceremony in a stunning floral outfit.

The royal looked elegant in a striking blue ensemble as she made an appearance she presided over the ninth Honorary Ambassadors of the Spanish Label at the Royal Palace of Madrid.

Standing alongside King Felipe the royal mother-of-two, 48, showcased her sensational sense of style in an ornate blue pencil skirt paired with a smart satin top with matching cuff and collar for the event on Monday.

She teamed her sophisticated attire with a pair of elegant cream heels and a clutch purse as she attended the Honorary Ambassadors ceremony alongside the likes of Javier Solana, the President of the Prado Museum Foundation.

The queen wore her silky brunette tresses down her shoulders and opted for a bronzed smokey eye for the outing with Felipe, 53.

The monarch made sure to keep herself protected amid the ongoing coronavirus pandemic by sporting a white face mask covering both her nose and mouth.

King Felipe and Letizia presided over the event and presented awards the Honorary Ambassador awards to the winners, which included Belen Garijo, head of health division for German pharmaceutical group Merck.

At the event, the King congratulated those who participated while wearing a sophisticated navy striped suit which he paired with a pink and purple patterned tie.

Market analysis The market value of Nightingale, which is listed on the stock exchange, is ultimately a matter of faith.

From Sacoa to home: historic marquees that we all saw in the fichines

Gisela Valcárcel confirms her return to TV: “My heart is grateful”