Floods in Germany and Belgium already leave more than 120 dead 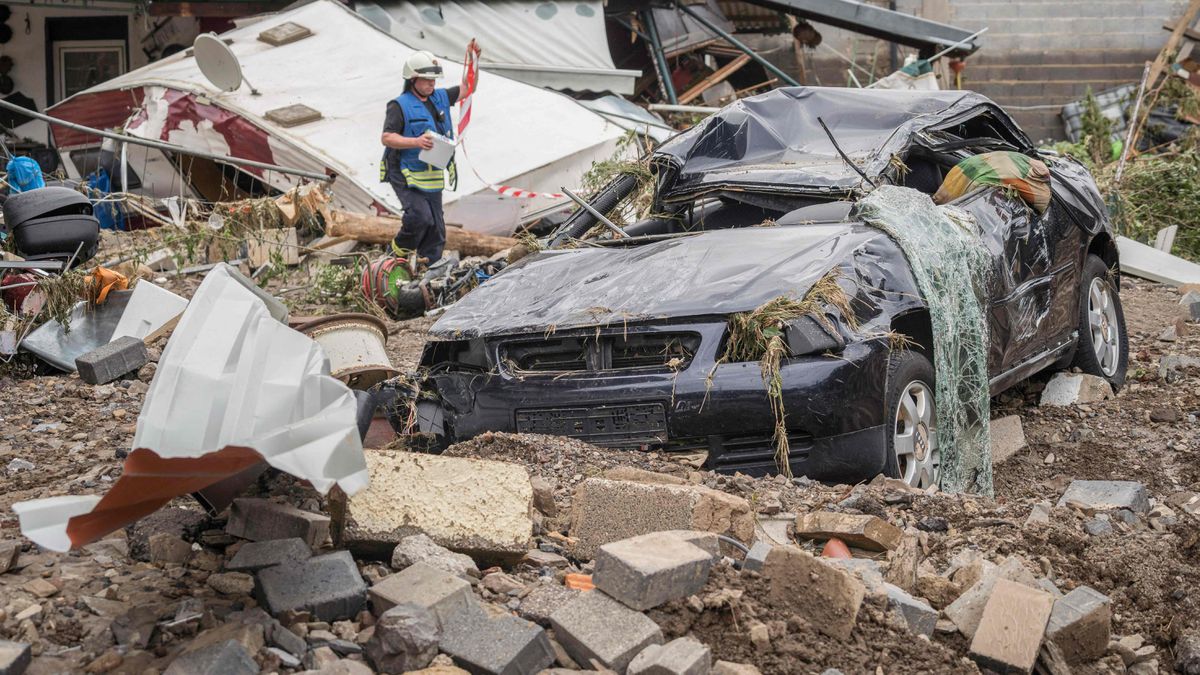 The death toll in the serious floods that ravaged western Germany and eastern Belgium during the early hours of Thursday already rises to more than a hundred people in what is the largest loss of life due to a natural disaster in the area. in decades. The floods have also affected Luxembourg, the Netherlands and eastern France. Most of the confirmed deaths have occurred in the German country, 103, while in the Belgian region of Wallonia the balance amounts to at least 20 deaths.

In a single district of Germany, Ahrweiler, south of Cologne, there are also 1,300 missing people, the local government announced on its Facebook account. With this high number of people whose whereabouts are unknown, the German authorities fear that the number of fatalities “will have to be corrected upwards,” said a Koblenz police spokesman, although in many cases it may be due to the cutting of lines. landlines and mobile phones. In this district many roads are still closed and the police ask that no one take the car to check if their relatives are well because they are putting themselves in danger and they also block the rescue routes.

Contacting those affected has been difficult in recent hours. Mobile phone networks have been down in some of the German regions affected by these rains, the most abundant in 24 hours from records. Entire towns, such as Schuld, have been razed, with many of their houses reduced to rubble, after the flooding of rivers as they pass through large regions of two western Länder, North Rhine-Westphalia and Rhineland-Palatinate.

The force of the water has continued to cause damage in the early hours of Friday. In Erftstadt, near Cologne, several houses have fully or partially collapsed, reports the public television ARD. Rescue teams were still trying to reach residents who had returned to some of these homes despite warnings not to do so, according to the Cologne district government. Emergency services are rescuing those affected in boats. In this area there are many disappeared. In addition, a gas leak has made tasks even more difficult. Several nursing homes have been evacuated, as well as hospitals.

After midnight, a reservoir overflowed on the Rur river (a tributary of the Meuse) near the Belgian border. Experts had warned of this the day before. The Steinbach dam also threatens not to withstand the waterspout that fell on Wednesday night and early Thursday morning, which caused rivers to overflow, washed away houses and flooded basements, where some people drowned after being trapped. The overflowing of these dams will cause flooding in the lower reaches of the Rur, according to the authorities. The Düren district warns of the risk in the towns of Heimbach, Nideggen and Kreuzau.

Some 165,000 people were still without power on Friday morning. Several railway lines are still cut. Long-distance trains from the capital Berlin only run as far as Düsseldorf and do not continue to Cologne and Bonn. Highway 1 has been closed in both directions near Leverkusen.

The German army has sent 900 soldiers to the area to help rescue and search for missing persons in the two affected states. According to the German Interior Ministry, there are 15,000 people working in rescue tasks. The head of that portfolio, Horst Seehofer, attributed the floods to climate change and called for measures to be accelerated to deal with it. “No one can doubt that this catastrophe is related to the climate crisis,” he said in statements to Der Spiegel. Seehofer announced aid from the federal government for those affected, as announced yesterday by Angela Merkel – on an official visit to Washington – and other ministers. The Executive plans to approve the aid at its meeting on Wednesday.

The water washed away cars, houses and even entire streets in the two affected West German states: North Rhine-Westphalia, the most populous in the country, with 18 million inhabitants, and Rhineland-Palatinate (four million inhabitants) . The Koblenz police have set up a phone number to report missing persons. Images recorded from drones show entire towns with the streets covered in water. They are the worst floods in Germany in decades, more devastating even than the ones that hit the east of the country in 2002.

In Belgium, torrential rains have caused 23 deaths, according to the newspaper Le Soir, in addition to causing great damage, especially in the southern region of Wallonia. Of the deceased, 15 correspond to the towns of Verviers and Pepinster. The situation is especially serious in the province of Liège, where this Friday morning three dead bodies were found in the municipality of Trooz, according to the mayor of this town, Fabien Beltran. Although the weather situation is expected to improve, the stability of many buildings is at risk and new evacuations are not ruled out.

The floods have damaged Belgian infrastructure. “Entire roads and highways have disappeared due to rising waters and we do what we can, although we lack material. What is certain is that it will take months and years to recover, “said Beltran. In total, 41,000 households are still without electricity; the water in the most affected municipalities has been considered undrinkable, dozens of road sections are cut off and trains are stopped in the south of the country.

Belgium has also asked its EU partners for help in activating the civil protection mechanism, as reported by the European Commission. France has sent boats and helicopters and “many teams have already arrived in Belgium”, according to the spokesman for the Community Executive, Stefan De Keersmaecker.

In the Netherlands, authorities asked about 10,000 Maastricht residents on Thursday to evacuate their homes because there was a danger that the Meuse river would overflow as it passed through this city, reports Isabel Ferrer. Both the Netherlands and Luxembergo have declared a state of natural disaster

Also in France, the meteorological services maintain an orange alert on Friday for the risk of flooding in 13 departments in the northeast of the country, in the border area with Belgium and Germany, due to the expected rains.

In Germany, the North Rhine-Westphalia parliament is scheduled to hold an emergency meeting on Friday. German Chancellor Angela Merkel, on an official visit to Washington, on Thursday called what happened a “catastrophe” and said she was “shocked” to learn the extent of the tragedy. “It is impossible to describe it in words,” he said in a brief appearance before meeting with US President Joe Biden. Merkel said she was in contact with the leaders of the two affected states, with the Minister of Finance, Olaf Scholz, and with the Minister of the Interior, Horst Seehofer. The leader had planned to fly back to Germany in the early hours of this Friday.