Floods and destruction in Europe: Why was the storm so devastating? 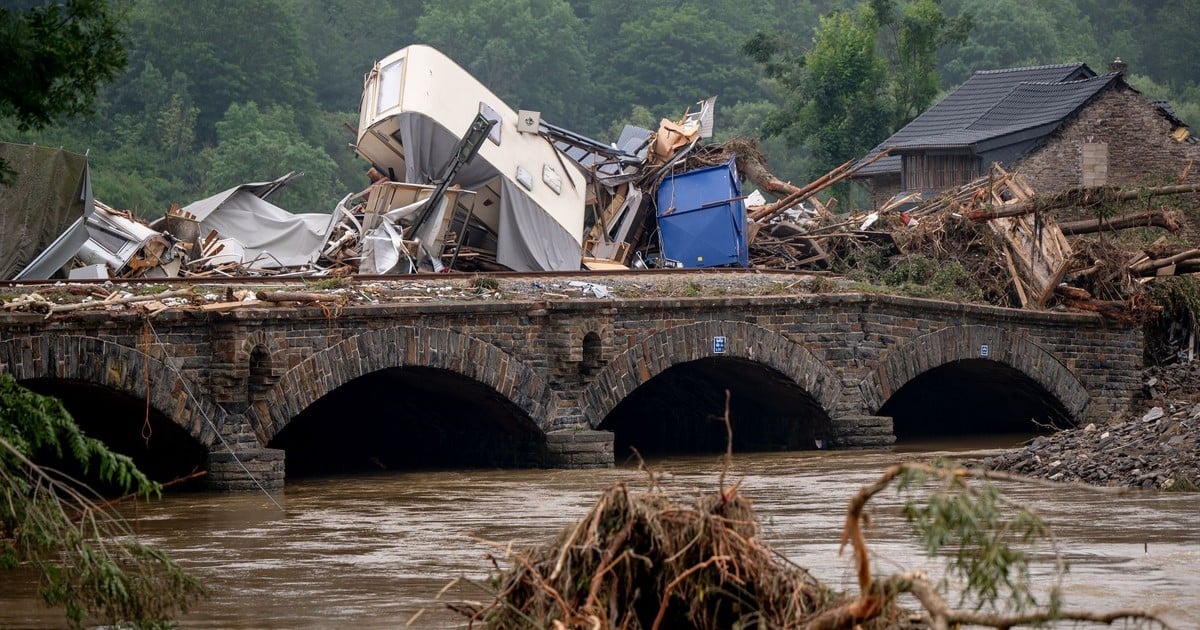 The floods that devastated areas of western Germany and some regions of Belgium, Luxembourg and the Netherlands had an unprecedented magnitude, which left at least 150 dead and dozens missing as of this Saturday.

What was the cause of this flood and why did it cause so much destruction? Here, the explanation of some experts.

“Air masses, loaded with abundant water, were blocked in altitude by cold temperatures that made them stagnate for four days in the region,” explains Jean Jouzel, climatologist, former vice president of the IPCC, the group of climate experts in the ONU.

The result was intense rainfall, between July 14 and 15, which reached “100 and 150 millimeters”, which equates to two months of rain, according to the World Meteorological Organization.

Although the region is used to heavy rains, they were “exceptional, both in the amount of water spilled and in its violence,” says Kai Schröter, a hydrologist at the University of Potsdam.

The debate is intense. Several European political officials clearly establish a link between these storms and climate change. But the German extreme right refutes this explanation.

“At the moment, it cannot be said with certainty that this event is related to climate change,” but such extreme events are becoming “more frequent and more likely” due to global warming, estimates Kai Schröter.

The increase in the temperature of the planet mechanically increases the evaporation of water from the oceans and rivers, which brings “greater masses of water into the atmosphere,” he explains.

This phenomenon can increase the risk of intense and violent rainfall, says the researcher.

More generally, extreme weather events are more likely due to global warming, according to the IPCC.

Why so many victims?

The rainfall suddenly increased the flows of small rivers and tributaries, which did not have the capacity to withstand such amount of water and they weren’t protected with sufficiently high banks.

“The Rhine is used to flooding, the biggest problem is the small rivers, the tributaries,” stressed the president of the German region of North Rhine Westphalia, Armin Laschet, on Friday.

“Big rivers are slower and wider, the water rises more slowly and we have more time to prepare, unlike small rivers,” says Schröter.

Some German media and experts question the lack of preparation from the authorities, who would not have alerted the population well in advance.

Houses destroyed by the fury of the floods in Pepinster, Belgium. Photo: REUTERS

“Analysts issued alerts and yet the warnings were not taken seriously and preparations were insufficient,” estimates Hannah Cloke, a professor of hydrology at the University of Reading in the UK.

In addition, the lack of awareness of the population living in flood areas regarding these risks is pointed out.

“Some victims underestimated the danger and did not respect two basic rules during heavy rains: avoid basements where the water enters, and immediately cut off electricity,” says Armin Schuster, president of the BBK, a public body specialized in natural disasters, in the german newspaper Bild.

The risk of cement

Dozens of dead were found in their basements.

Some experts point to urbanism and the increasing amount of cement in the soils of western Germany, the economic center of Europe.

“Urbanization, important in these regions, played an important role (in the tragedy). Would so many people have died forty years ago?” Asks Jean Jouzel.

The artificialization of the land prevents water from infiltrating the soils, which no longer play a sponge role, increasing the risks of flooding.