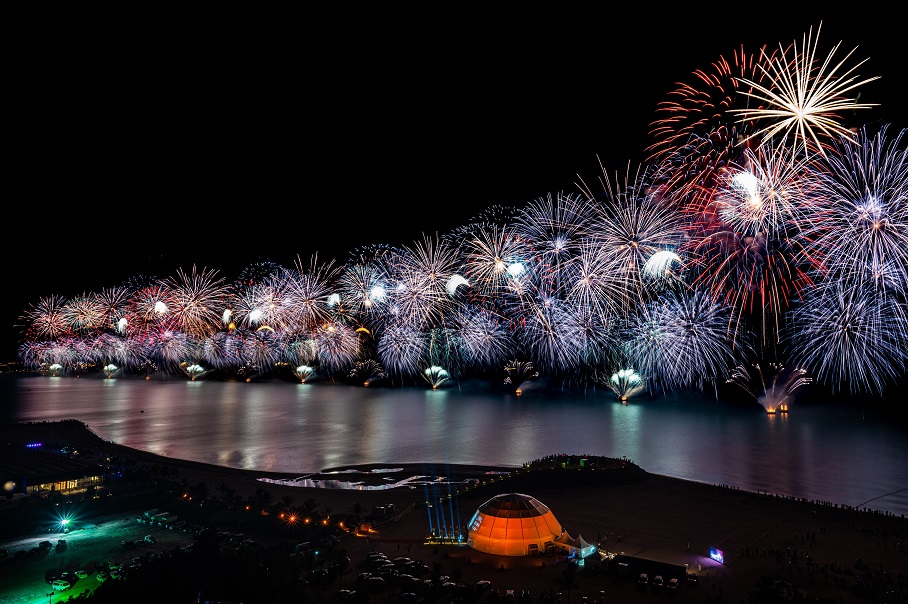 The Emirate of Ras Al Khaimah has dazzled hundreds of thousands of visitors from all over the world and gave them an exceptional experience by all accounts to celebrate the New Year with an unprecedented display of fireworks that won two Guinness World Records titles.
The captivating fireworks display crowned the New Year’s celebrations by spreading feelings of positivity and optimism, and special congratulations to the UAE on the occasion of its recent celebration of the Golden Jubilee, and confirmed Ras Al Khaimah’s growing position as one of the leading tourist destinations in the region.
Fireworks were launched to fly over the waters of the Arabian Gulf in a majestic scene that captured the eyes of the world. This distinguished show included innovative formations presented by unmanned aircraft over a distance of more than 4.7 km.. The show lasted for 12 minutes and consisted of six stages, each with its own character. To the tunes of a choir, to embody the feelings of pure joy at the return of the collective celebrations that the world missed due to the pandemic.
The perfect harmony between the movement of lights and the rhythm of the music gave visitors, who were at the camping sites for this event with their friends and family, one of the most festive experiences ever.
A spokesman for the Supreme Committee for Organizing New Year’s Celebrations in Ras Al Khaimah said: “We were keen to organize a festive fireworks display on New Year’s Eve to salute the leadership and residents of Ras Al Khaimah and the UAE in general, especially since this year’s performances come shortly after our dear country celebrates its National Day. And in conjunction with its preparation for the next fifty years..This year’s celebrations spread a message entitled hope, positivity, flexibility and confidence in the future, and provided a warm social atmosphere and brought back mass celebrations in accordance with the finest health and safety protocols and procedures..Thanks to this pioneering event, we reaffirmed the position of the Emirate of Ras Al Khaimah as a tourist destination Pioneer welcomes visitors from all over the world.”
The fireworks displays were held to celebrate the New Year in Ras Al Khaimah in six successive stages, starting with the traditional countdown before midnight and the start of the breathtaking performances.. And the new year began with the launch of a stunning light tower more than one kilometer high, higher than any building in the world . This was followed by the phrase (Happy New Year) written in the sky by drones dedicated to fireworks, to make the arena shine in multiple colors.. These performances ensured the Emirate of Ras Al Khaimah setting two world records in the Guinness World Records.
The next stage greeted the UAE to the rhythm of a musical choir, through a show celebrating the achievements of the country and its people. The elegantly designed fireworks were transformed into the next stage to form hundreds of drones, the emblem of the fiftieth National Day of the United Arab Emirates in a distinguished show. This was followed by another show that expressed the aspirations of the UAE during the next fifty years.. The end of the show consisted of two parts, one of which was a multi-colored display of lights and the other presented a huge area of ​​white that lit the horizon of Ras Al Khaimah with a message of hope and ambition.
The Emirate of Ras Al Khaimah set the first world record for the category of “highest height of a drone fireworks display” by forming a tower of fireworks with a height of 1055.8 meters (more than 1 kilometer), exceeding the length of any skyscraper in the world. Using the latest in drone technology, the fireworks display specially designed for the occasion was absolutely stunning given its unprecedented scale.
The second record was in the category of “the largest number of drones used to launch fireworks at the same time”, as 452 drones launched fireworks at the same time to create a visual formation of the phrase (Happy New Year) in the sky of the emirate. In order to achieve this impressive achievement, the event organizer used the latest advanced fireworks technologies and integrated wireless communication technologies to illuminate the emirate’s beaches with amazing visual and color spectra in a majestic scene that is rare.
The color-changing fireworks projectiles used in the show were developed based on the proprietary technology surrounded by a large degree of protection and secrecy owned by the company specialized in manufacturing fireworks in Italy. The use of more than 130 marine buoys and a fleet of hundreds of drones dedicated to launching fireworks.
The festive event was organized in line with all social distancing protocols and other safety guidelines, with the support of the National Authority for Emergency, Crisis and Disaster Management and the Ministry of Health and Community Protection.. Visitors had the opportunity to watch the amazing festive performances from special viewing platforms along the street connecting Al Marjan Island and Al Hamra Village.
The celebrations, which began earlier in the evening, witnessed the organization of live DJ performances at the event site, which provided visitors with an integrated experience with the provision of a range of food carts and areas designated for children, in addition to a dedicated shopping area.. The star-studded concert performed by the Punjabi singer succeeded. The famous Guru Randhawa accompanied by a number of the most famous DJs in the UAE to ignite the enthusiasm of the audience and give them unforgettable memories easily.

Renzi-Calenda united against Conte send signals to the Democratic Party