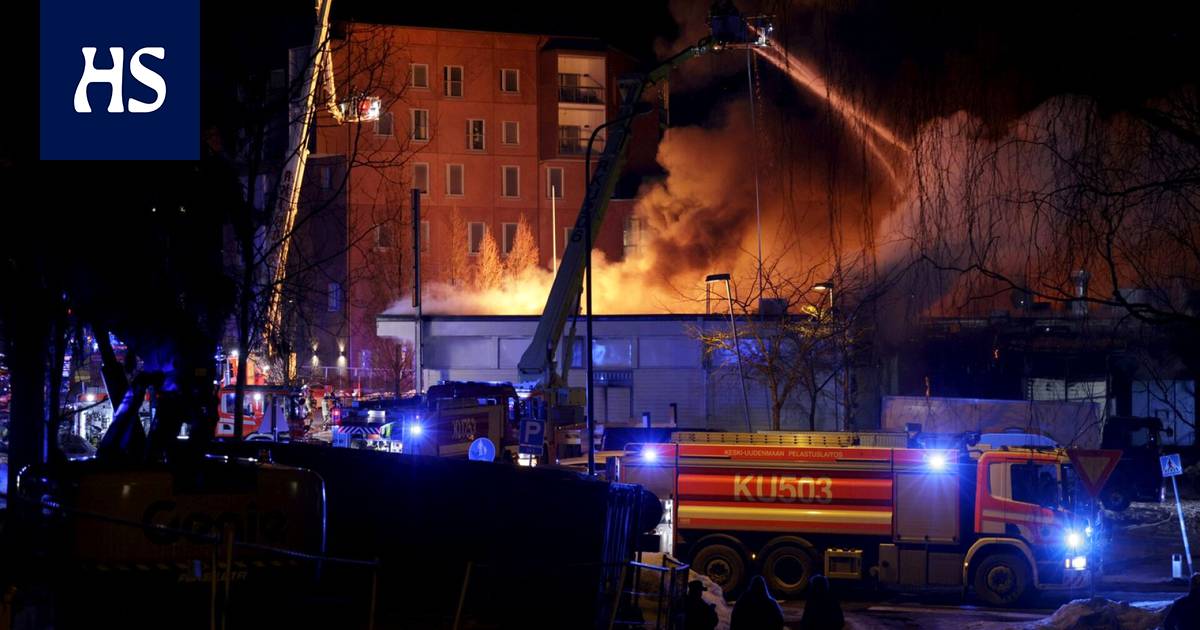 According to Juha Nevamäki, who lives in the suburbs of Jampa, the residents of the nearby area lost an important gathering place in the fire.

Fire destroyed a shopping mall in Järvenpää in the suburb of Jampa on Friday night. The mall had a large K-market, an R-kiosk, a pizzeria and parish facilities, all of which were lost.

“The property has been completely destroyed,” confirms the firefighter of the Central Uusimaa Rescue Department. Juha Virolainen.

Juha Nevamäki and his family live 500 meters from the destroyed mall. He learned of the fire last night as his teenage son walked past the mall as he returned home from the gym. The fire was already well underway at the time.

“The boy said that the walls of the shopping center had collapsed,” Nevamäki says.

He decided to go see the fire himself shortly after ten o’clock. The vision was hopeless.

“The destruction looked shocking. I have lived in Jampa for 22 years and I have never seen such a big fire and I never remember anything like this happening here. ”

According to Nevamäki, the now destroyed shopping center was an important gathering and shopping place for the residents of the area, where he himself was active.

“We lost Local Services: R-kiosk, a big K-store. There are many elderly people living in the area, and the parish had large facilities in the mall and active activities such as food distributions and fairs. There is nothing left. ”

In Järvenpää, a fire in a shopping center in the suburbs of Jampa was put out on Friday night. Picture: Seppo Samuli / Lehtikuva

“It’s just awful. There was nothing left of the deal, it went all the way to the ground. It also feels extremely bad for the staff and all the customers. This was the shop of my own village. ”

Ranki had only started as a merchant in a shopping mall in the Jampa area last November.

“This is a crushing blow. The activity had finally started to roll, and then it happens. ”

Shopping center managing director Briitta Lajola is also appalled by the scale of the devastation.

“I went to the scene in the morning to look, and it looks inconsolable and total. Everything has burned to the ground, so to speak. There weren’t many pieces of the wall upright, ”he says.

According to Lajola, the fire is a major blow not only to the residents of the area but also to the entrepreneurs.

“The K-retailer had just changed, and the pizzeria had just recently been renovated. I met an entrepreneur in Ärra, he becomes unemployed and has to be laid off by the staff. It’s hard for everyone, many people have a job and a livelihood. ”

Lajola heard about the fire at eight o’clock yesterday and immediately guessed that the consequences would be devastating.

“The building is timber-framed. The moment you start to burn, it easily goes to the end. As a layman, I would assume that it has burned out beyond repair. ”

Fire reportedly originated from a trash can.

The kindergarten in the immediate vicinity of the mall survived with minor smoke damage.

“Police believe it is possible that the fire was intentionally ignited. The damage to property is extensive, ”says the crime commissioner Krista Vallila.

Nevamäki according to the residential area is usually quiet.

“It doesn’t make me fear any, because it’s quite exceptional that this kind of thing happens. But the trash can doesn’t catch fire on its own. There must have been some insane whim, maybe the author hasn’t understood how big the penalties are, ”says Nevamäki.

Alex died tragically, he was only 31 years old