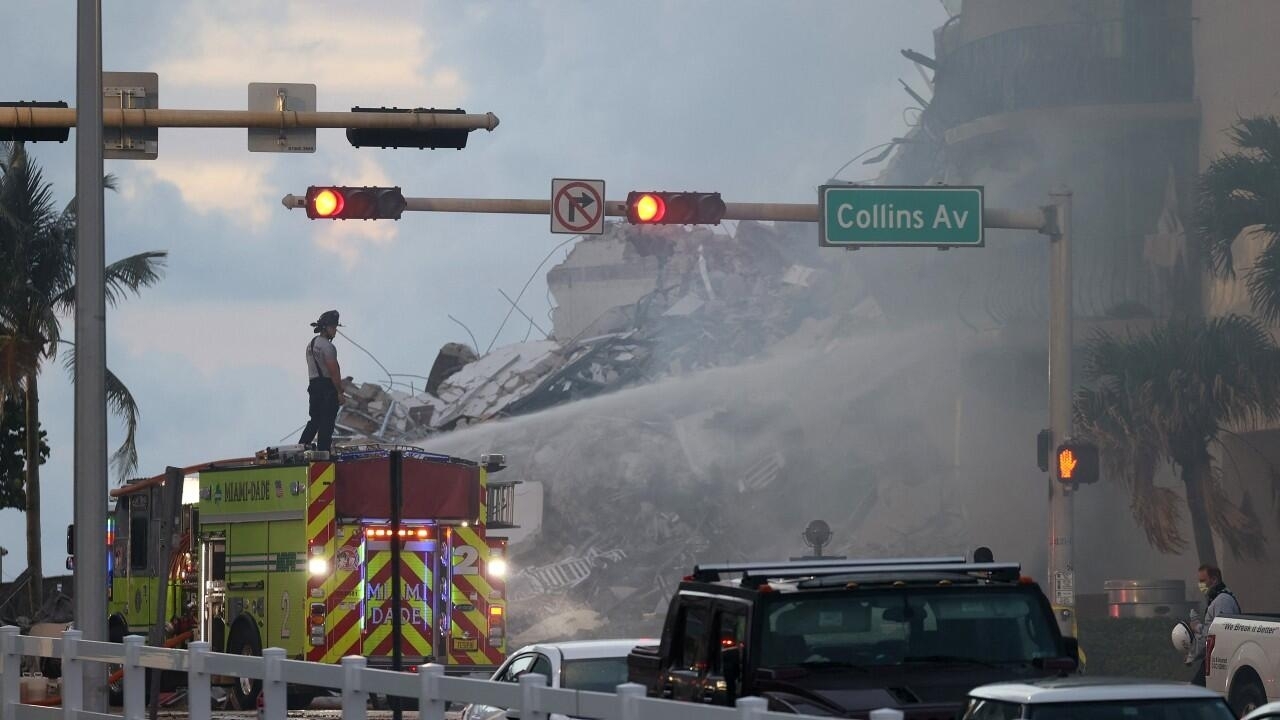 Rescue teams trying to find survivors under the ruins of the residential building that collapsed in Miami-Dade County last Thursday reported a “large” fire in the last hours that hampered operations. Meanwhile, investigations into the incident have revealed that the building had suffered significant damage for decades and the evacuation of a nearby tower was ordered.

Rescuers are working around the clock in hopes of finding life under the rubble of the 12-story apartment tower in Surfside, Florida. There are 159 people who are missing and four deaths have been confirmed so far, according to authorities.

But their work was hampered in the last hours when a fire broke out at the site. The fire and smoke came from deep within the concrete and metal debris on the north side of the collapsed tower of the Champlain Towers apartment building.

Officials say fire has spread amid the rubble of the collapsed building near Miami where 159 people remain unaccounted for. Miami-Dade Mayor Daniella Levine Cava said that the flames are deep and firefighters have not been able to find their source. https://t.co/0tazxzt9WM


Rescuers used infrared technology, water and foam to combat the flames, the origin of which has not yet been clarified. In order to “isolate the smoke and fire,” a crane removed pieces of debris more than 30 feet high, while dozens of workers used large machines, small buckets, drones, and their bare hands to collect the debris.

In a press conference, the mayor of Miami-Dade County, Daniella Levine Cava, assured that the smoke has been the biggest challenge. He described the fire as “very large” and said rescue teams faced “incredible difficulties” due to the flames.

Also, water hoses pointed to one of the lower floors while steam escaped. “The stench is very thick,” said Florida Governor Ron DeSantis, who spoke at the same news conference.

Meanwhile, dozens of relatives, some staying in hotels near the scene of the incident, follow the search operations on television and wait for news of their loved ones.

“I know my mom is a fighter. I know that she loves us. I know you don’t want to give up. So, you know, it’s day three, it’s hard, “said Rachel Spiegel, whose mother, Judy Spiegel, 66, lived on the sixth floor of the building.

Teams from Mexico and Israel arrived to help relieve local crews, many of whom have also traveled to disaster sites around the world.

As efforts to find the missing continue, US authorities have asked relatives to undergo DNA tests for identification.

The brother of a Paraguayan woman who worked as a nanny in the collapsed compound has already undergone this test, as confirmed this Saturday by the Foreign Ministry of his country in a statement.

It is about Lady Luna Villalba who traveled to Miami with Sophia López-Moreira, sister of the first lady of Paraguay, Silvana López-Moreira, her husband Luis Pettengill, and their three minor children, to take care of them. They are all still missing.

The wife of the Paraguayan president, Mario Abdo Benítez, traveled to Miami since Friday to closely follow the investigations. The president suspended his schedule on Thursday when it became known about the collapse, and remained at the presidential residence of Mburuvicha Roga on Friday awaiting information.

Although the exact cause of the collapse of the residential tower has not been confirmed, the authorities are beginning to reveal indications about what would have influenced the incident.

The pool deck on the ground floor of the oceanfront condo building was on a concrete slab that had “significant structural damage” and was in need of extensive repair, according to a 2018 engineering report from Morabito Consultants, which It was revealed by the Surfiside mayor’s office along with another series of documents.

The report warned of “a major error” that goes back to the origin of the building, where the lack of adequate drainage for the pool had caused the damage.

Likewise, the company in its report indicated that it discovered “abundant cracks and chipping” of columns, beams and concrete walls in the parking garage.

While the report did not warn of imminent danger, and it is unclear if any of the observed damage was responsible for the collapse, it did point to the need for extensive and costly repairs to repair the systemic damage at Champlain Towers South.

Attention is also paid to ocean water. One theory is that the ubiquitous salt water in the area, which is subject to flooding during the so-called King Tide events, intruded on the concrete supports, corroding the steel rebar inside and weakening the concrete.

In addition to these situations, the ground on which Champlain Towers stood has been gradually sinking, according to a study published last year by an environmental professor at Florida International University.

The condo was preparing to go through recertification this year, a safety requirement for buildings turning 40 in Florida. Many residents with buildings of a similar range of construction time wonder if they would be taking the same risk.

And although it is not a certainty that this is the case, local authorities ordered the evacuation of a tower near the building that collapsed, with the aim of examining if there are structural failures that indicate a similar risk.

“I need to be able to say it’s safe, and I can’t now,” Surfside Mayor Charles Burkett told Reuters. “With great caution, it’s probably wise to let people relocate for a couple of weeks while we check.”

Although evacuation is not mandatory, many residents are eager to leave, according to the president. Those who so decide, the Federal Emergency Management Agency (FEMA) will relocate them for a few weeks, while the comprehensive review of the property is completed.