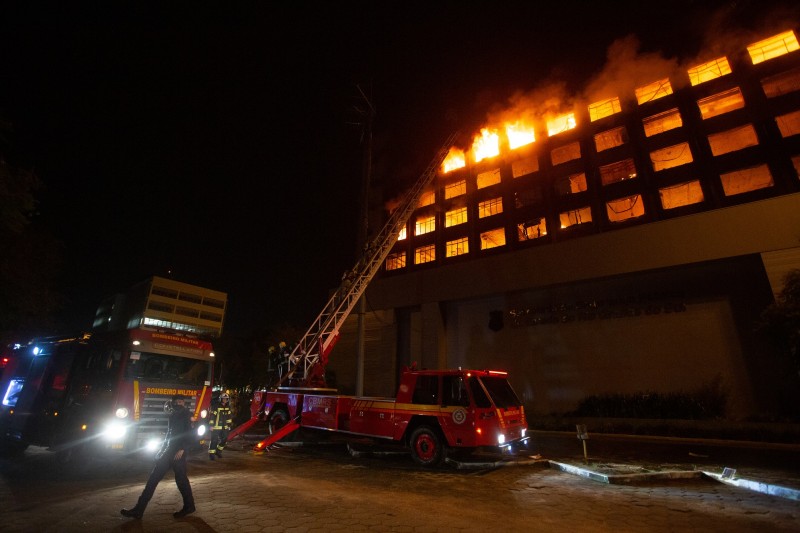 A fire of great proportions reached the building of the SSP (Secretary of Public Security) of Rio Grande do Sul, in Porto Alegre, on the night of this Wednesday (14.Jul.2021). Part of the building collapsed.

The SSP reported that 2 firefighters are missing. According to the lieutenant governor, Ranolfo Vieira Júnior (PTB), who is also secretary of Public Security, the place was evacuated before the fire spread, as well as the surroundings of the building.

“Our priority becomes the location of 2 fellow firefighters. At the same time as we continue the actions of the crisis office, we will be monitoring the work”, said Vieira in an interview with journalists in the early hours of this Thursday (July 15th).

The building housed, in addition to the SSP, the offices of the Detran (Department of Transit), the General Institute of Expertise, the penitentiary administration and the control center (190) of the Military Brigade. In a statement, the state government stated that “the essential services that were provided in the building, such as the 190 service and the installation of electronic anklets, were not harmed”.

It is not yet known what started the fire.

The secretary of Public Security also said that evidence of criminal investigations had not been lost. Service 190 was transferred to another location as an emergency and works normally

Fur Twitter, the governor Eduardo Leite (PSDB), who was in Brasília, stated that he would return to the state capital in the next few hours. Leite also informed that the causes of the fire will be investigated.

On social networks, residents of Porto Alegre posted images of the fire and caught sight of the landslide.

Rio Grande do Sul. Fire at the headquarters of the State Public Security Secretariat, now. pic.twitter.com/ZstR33jgy4

The fire that is now affecting the Porto Alegre Security Secretariat building! Several floors have already been hit. There is no record of any injuries. pic.twitter.com/X5SXgtiIvY