Fighters rage against security guards who help women in Dumpert video: ‘Aggression against us is increasing’ | Work 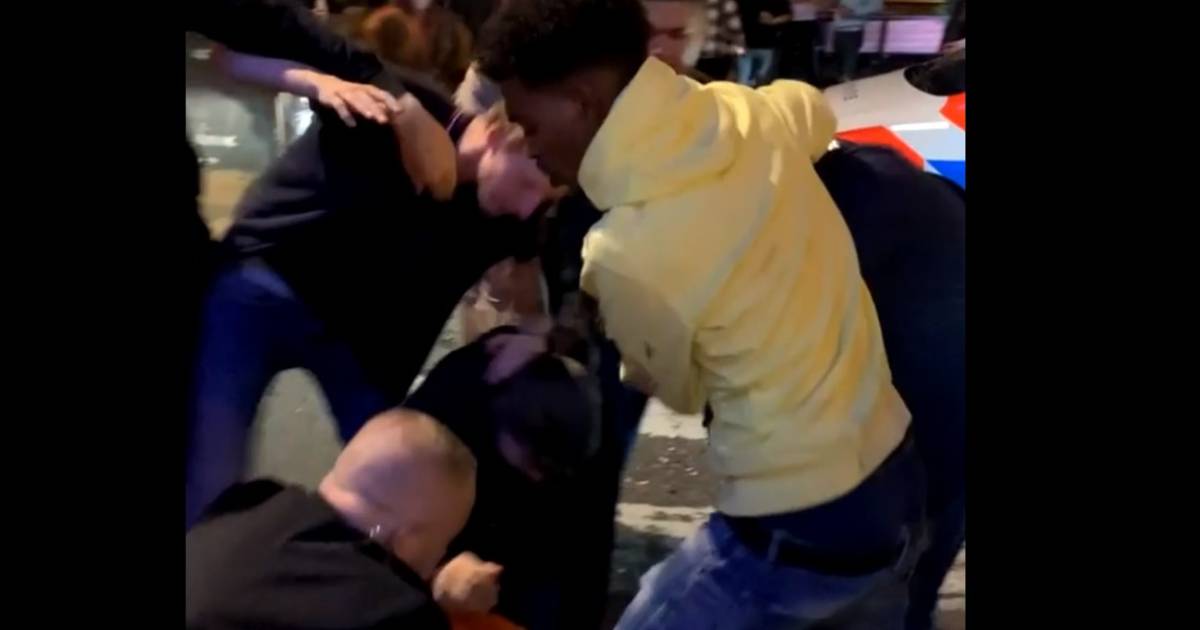 groningenOn the Grote Markt in Groningen, a big fight took place between a number of young people in the night from Saturday to Sunday, which was eventually calmed down by security guards and police officers. Images of the mat party, where police officers in particular receive a number of firm taps, are going today viral on the internet. “That aggression is really not possible, but it is the reality,” reports the company for which the security guards work.

Due to the relaxation that started last weekend, it was again possible to dance and party for a few hours on Saturday evening, without keeping the mandatory 1,5 meters away. According to police spokespersons, it was quite busy in the inner cities, but in general there were few notable incidents. “What was striking was that many people got drunk early, probably because they were finally able to go back,” the police said.

At midnight, however, things went equally wrong in Groningen’s city centre. Several screaming youths clashed with each other near Gelkingestraat. That happened after a man and a woman were harassed by a group of ten young people, security company M&F-Security reports. ,,We’ve been targeting these guys for a while. They caused a nuisance and did not leave that man and woman alone. We couldn’t bring ourselves to not intervene,” said safety adviser Maurice Zwiers.

The aggression then quickly turned against the police officers and security guards. In a video, which has already been viewed more than 100,000 times on Dumpert, a considerable skirmish can be seen in front of a catering facility, in which fighting young people are kept at a distance by security guards. The security guards, who are not allowed to use force according to the law, have to pay for their efforts with a beating. “The officers were kicked and beaten,” Zwiers said. “Two of our security guards then got those people off the agents.” One of the security guards came into the sights of the ringleaders. “In an attack, a person tried to hit him in the face. This warded off the security guard.”

They are spicy images, the company acknowledges. “Unfortunately, this fits in with the trend of increasing aggression in the nightlife towards social workers and security guards,” Zwiers sighs. “These are things that really happen more often. Now it happens to be on Dumpert, but you don’t want to know what else our security guards have to deal with. We were now lucky that there were plainclothes agents who could pick out the ringleaders, otherwise things might have turned out differently.”

According to the Dutch security industry, a private security guard is not allowed to use force. ‘If he does, it will not be without consequences and it could end up in court. He looks at the case and considers all the circumstances. The judge is looking at whether the violence was justified.”

M&F-Security states that no explicit violence was used by the security officers. ,,They defended themselves, which is of course allowed. I think the security guards make a good impression on the images. That’s another way to do it!” The company will show the video to students in future training courses, so that they learn how to deal with aggression in a professional way.

‘The industry has been under heavy pressure in 2020’

In the first quarter of 2020, there was no sign of corona: 6.7 percent growth. After that, events were canceled and the catering industry closed. The result was a decrease in turnover of 3.4 percent compared to a year earlier. In the third quarter, turnover recovered slightly, but was still down 1.4 percent. The full overview of 2020 is not yet known at CBS.

Employers had serious problems keeping their people at work. “The industry has been under heavy pressure in the past year,” said Ard van der Steur as chairman of the Dutch Safety Industry. Especially the security of catering establishments and events fell away, but also object security, because schools and offices often closed their doors. In addition, much less effort was needed at the airports, and also in the transport of money and valuables, because the use of cash was discouraged in times of corona. “All of this has resulted in a huge drop in sales. Employers had serious problems keeping their people at work.” Bankruptcies are not yet an issue, he said.

About 29,000 security guards are active in the Netherlands, 6500 of whom are women. The security guards are subdivided into about 450 companies with staff, the rest are self-employed. Van der Steur saw many entrepreneurs seize opportunities to change their business operations, for example from event to object security and mobile surveillance, or they switched to enforcing compliance with the corona measures in hospitals, test streets and on the street.