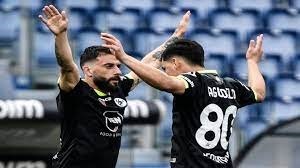 The International Football Association “FIFA” banned Italian club Spezia from making contracts for a period of two years, due to the violation of the laws contracting with minor players, after it included several players from Nigeria.

The club, owned by an American businessman, will not be able to make any deal as of next January.

The Italian club will have to pay a fine of 460,000 euros, as FIFA also announced.

The same penalties were imposed on two amateur clubs, Lavanese and Valdivara Cinque Terre, after they played an active role in the aforementioned scheme. Spezia ascended to the Italian league for the first time in its history in 2020, before finishing last season in fifteenth place.

The club said it would appeal a very severe sentence, noting that “the alleged irregularities occurred between 2013 and 2018, and therefore under the previous management of the club.

“We were surprised by FIFA’s decision to impose a severe transfer ban on our club,” Platke said. “The new ownership played no role in the alleged abuses directed at the club, and strongly condemns any system involving the illegal transfer of minors.”

He concluded: I cannot comment further on the matter due to the ongoing legal procedures, but I would like to reassure our fans, noting that “we will appeal this ruling and will take appropriate measures to ensure that our team remains competitive in the coming years. It is noteworthy that the ban does not include the current summer transfer period.”